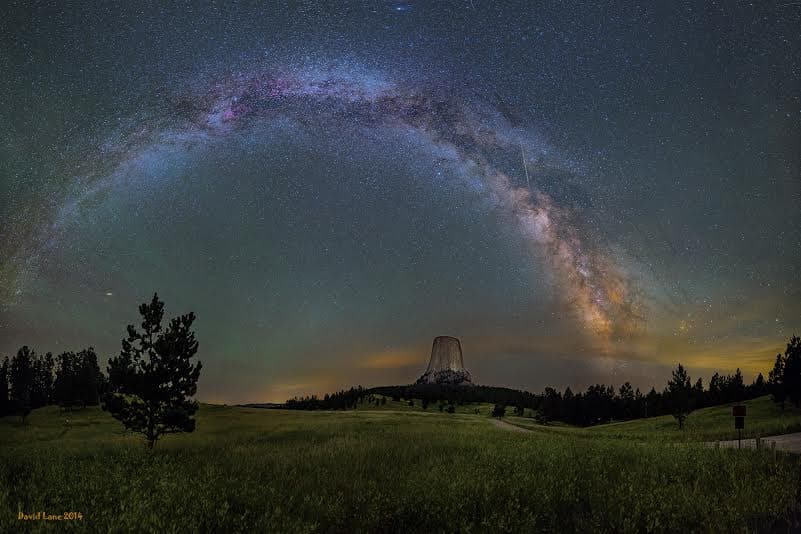 In this stunning image — captured by David Lane (from "Dave Lane Astrophotography"), who also took one of our favorite featured APotDs of all time — we see the light from billions of stars illuminating the sky above Devils Tower.

Found in Wyoming. Devils Tower (known as ‘Mato Tipila' to the native american tribes indigenous to the area) is an ancient, one-of-a-kind rock formation, with unclear origins. Experts agree that the structure was forged by igneous intrusions, but just how this scenario played out remains shrouded in mystery. Theories include it being the "eroded remnant of a laccolith," ("a large, mushroom–shaped mass of igneous rock which intrudes between the layers of sedimentary rocks but does not reach the surface"), or the "plug" of an extinct volcano.

Regardless of the forces by which the Devils Tower was forged, it is undoubtedly the perfect backdrop to showcase the immensity of our galaxy, the Milky Way. This image is special in another way, as it also contains various spooky sites, which are annotated below.

Many famous regions are pictured wherein, including Pluto and the Wizard Nebula, but what adds another layer of Halloween fun is the fact that the other regions are spooky in nature, like the Witches Broom nebula (also known as the Veil Nebula), the Little Ghost Nebula, the Flaming Skull nebula, the Ghost of Cepheus and The Glowing Eye Planetary Nebula,

The image itself is a panorama made of 16 separate images, all taken earlier this year at the end of July.

Make sure you hop over to David's facebook page and hit the "like" button. At the very least, check out the vast collection of images made available on there.