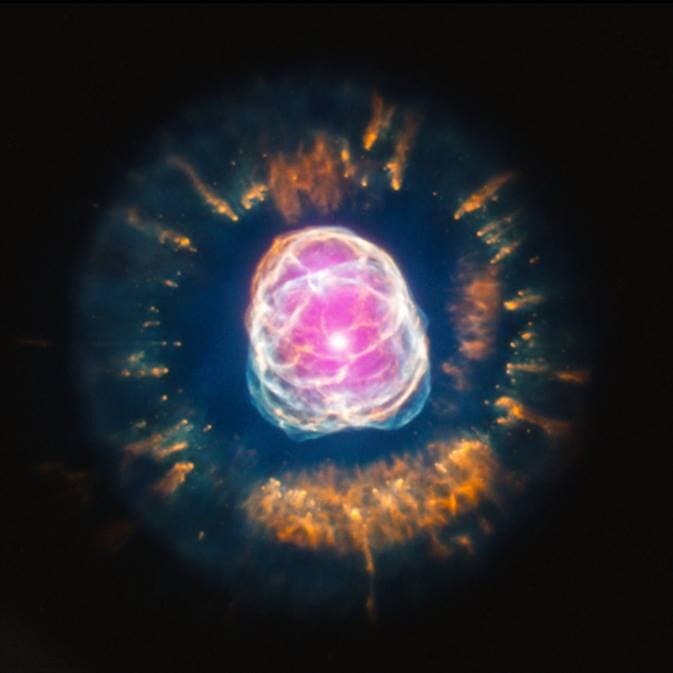 In this Hubble-taken image, we see yet another beautiful image that depicts one of the final phases of stellar evolution for sun-like stars. This process begins when a star no longer can stably fuse hydrogen into helium, ultimately forcing the star to burn through its supply of helium, which causes the star to grow in size (its diameter can increase hundreds of times larger than its initial, main-sequence diameter, literally engulfing any inner planets that may be in orbit around the star). At this point, much of the material is lost to space (due to violent stellar winds), but the bulk of the material will eventually be cast off into space, forming filamentary shells of gas that create photogenic nebulae.

Located in the center of the image is the dying, almost dead, star, now known as a white-dwarf. The stars in this phase of stellar evolution tend to be approximately the same size as Earth (in diameter), but with nearly as much mass as the sun in density. Although they are no longer fusing hydrogen into helium (as our sun is doing at the moment), the dwarfs still tend to be very hot and extremely luminous for a time (meaning they register quite a bit on the infrared portion of the electromagnetic spectrum), while the surrounding shell of material begins to cool.

This particular nebula, known as a planetary nebula, is called NGC 2392 (also known as the Eskimo Nebula). It can be found more than 4,200 light-years from Earth in the constellation of Gemini. The image is comprised of several separate images taken at various wavelengths. The x-ray data was acquired by the Chandra X-ray Observatory (in purple); while the optical data can be seen in red, green and blue, captured by the Hubble Space Telescope.