Andrew Yang's Goal: Steer Us Away From a Bleakly Dystopian Future

Is the presidential hopeful the answer to a rapid decline in financial security and mental health? 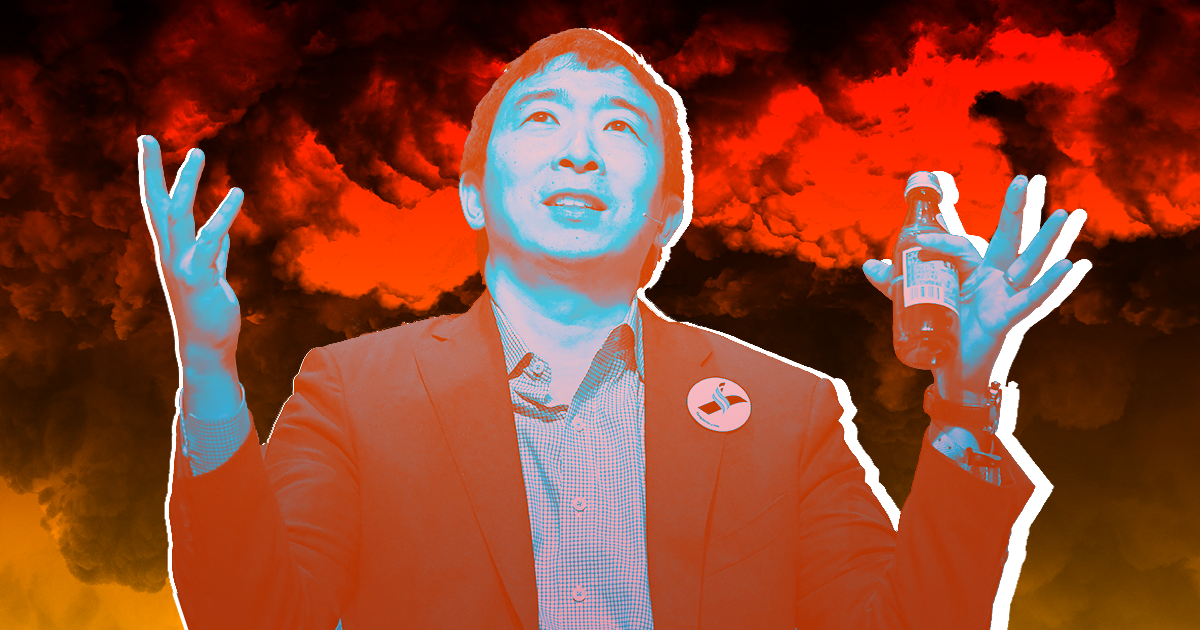 Long-shot U.S. presidential candidate Andrew Yang isn't hopeful about the imminent future of humanity — that much become instantly clear in a bleak profile published today by The Verge.

Public enemy number one: automation, which Yang sees as a destructive result of a rapidly globalizing market-obsessed future. The risk is millions of jobs lost and a host of undesirable side effects like financial insecurity and a decline in mental health — a joyless, dystopian future in which humans have been replaced by the machines they built.

A Long Way Up

Yang's core promise is to provide every U.S. citizen with $1,000 every month. That'd usually be called basic income. Yang, however, prefers to call it a "freedom dividend" — perhaps to make the idea more digestible to center-leaning voters.

"Even now, we have an epidemic not just of drug overdoses, but of anxiety, depression, and mental health problems," he told The Verge. "If you load pervasive financial insecurity and scarcity on top, you will have a population that starts dying younger, is less rational, does not know what to do."

The idea isn't as far fetched as you might think. A city in California recently started an experimental basic income program providing 130 residents with monthly payments over 18 months.

But Yang has a long road ahead. Polls put him at around three percent.

"The path from here to figuring it out is fraught with a lot of misery and suffering," Yang said. But that's not the end of the story. "I thought to myself, realistically, my choices are to watch the society come apart or try and galvanize energy around meaningful solutions," he added later.

READ MORE: Andrew Yang is the Candidate for the End of the World [The Verge]

Read This Next
From Our Partners
Learn Windows Automation In This Cyber Week Training Package Deal
Box Bots
Amazon Now Has Machines to Automatically Box Up Orders
Futurism
This Week in Tech: Sept 22-28
Futurism
This Sexy Burger Machine Won't Necessarily Steal Your Job, But Could Make It Better
Futurism
Aliens, Autonomous Cars, and AI: This Is the World of 2118
More on Sci-Fi Visions
From the Dept. of...
Monday on futurism
The Best Humidifiers of 2023
Human v. Giraffe
Jan 24 on the byte
Chaotic Italian Fashion Line Baffles Facial Recognition Software
Step One
Jan 24 on the byte
World’s Third Richest Person Says He’s Developed "Addiction" to ChatGPT
READ MORE STORIES ABOUT / Sci-Fi Visions
Keep up.
Subscribe to our daily newsletter to keep in touch with the subjects shaping our future.
+Social+Newsletter
TopicsAbout UsContact Us
Copyright ©, Camden Media Inc All Rights Reserved. See our User Agreement, Privacy Policy and Data Use Policy. The material on this site may not be reproduced, distributed, transmitted, cached or otherwise used, except with prior written permission of Futurism. Articles may contain affiliate links which enable us to share in the revenue of any purchases made.
Fonts by Typekit and Monotype.