What Was the Air Force's Secret Space Plane Doing in Orbit for 779 Days?

Here are some theories, from unlikely to most plausible. 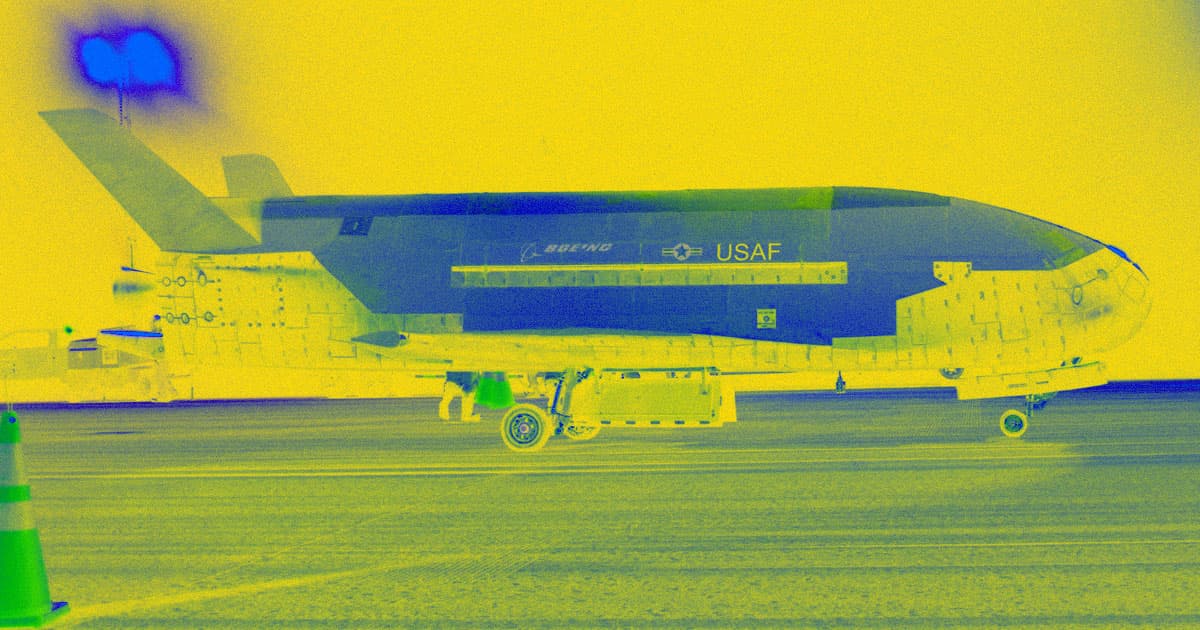 The U.S. Air Force announced Sunday that its top secret X-37B space plane had landed at the Kennedy Space Center, after spending 779 days in space — its longest stint yet.

The Air Force remains extremely tight lipped about the purpose of the two-year spaceflight. In a vaguely-worded press release, it said the craft "enables the US to more efficiently and effectively develop space capabilities necessary to maintain superiority in the space domain."

But the Pentagon's restraint about publicizing the program's ambitions hasn't stopped observers from speculating ever since the program's first launch in April 2010.

And no, it won't be chasing enemy spacecraft with laser cannons any time soon. The most common theories as to what the secret space plane could be up to are far more toned down.

According to a 2016 report by Air & Space magazine, experts suggested it could be testing autonomous navigation systems for both launch and landing.

The report also discussed the possibility of the 30-foot space plane being used to lower costs of launching heavier imaging satellites into space — a theory that could arguably use an update considering that the economics have shifted significantly in the spaceflight industry since then.

But Occam's razor prevails — by far the most common theory about the X-37B is that it's simply a spy plane meant for testing future reconnaissance, surveillance and navigation technologies.

The National Interest reported back in 2016 that the vehicle could move extremely fast, allowing it to rapidly shift orbit — an outrageous space maneuver that could allow it to "disappear" from imaging tech and confound adversaries, as Popular Mechanics reported earlier this year.

Some much wilder theories include that the space plane could be used to swallow up enemy satellites in its cargo bay or bomb enemy targets from space. But plenty of experts have disputed these theories over the years.

Read This Next
Can't See the Drones for the Swarms
This Theory Could Explain Many Military UFO Sightings
Futurism
The Air Force Has Invested $26.3 Million in a High-Energy Laser for Fighter Jets
Futurism
Military Drone Operators Are About to Outnumber Human Pilots
More on Robots & Machines
From the Dept. of...
12:00 AM on futurism
The Best Exercise Bikes of 2023
It's Nothing Pers...
Yesterday on the byte
Scientists Create Shape-Shifting Robot That Can Melt Through Prison Bars
From the Dept. of...
Yesterday on futurism
The Best Smart Lights of 2023
READ MORE STORIES ABOUT / Robots & Machines
Keep up.
Subscribe to our daily newsletter to keep in touch with the subjects shaping our future.
+Social+Newsletter
TopicsAbout UsContact Us
Copyright ©, Camden Media Inc All Rights Reserved. See our User Agreement, Privacy Policy and Data Use Policy. The material on this site may not be reproduced, distributed, transmitted, cached or otherwise used, except with prior written permission of Futurism. Articles may contain affiliate links which enable us to share in the revenue of any purchases made.
Fonts by Typekit and Monotype.