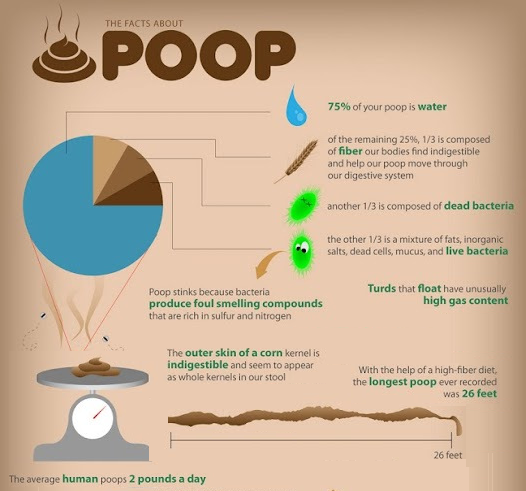 You see it every day (usually), and you interact with it all the time (really). Yet, most people do not know much about it. What is it? What's in it? Why does it smell? Why is it (usually) brown? Where is it? Everywhere. It's poop.

Poop seems very simple, and childish, and funny (to me, at least). Yet, there is a lot in it that makes it a much more complex subject. Our feces, as we know, is  made up of waste that our body discards. Depending on your metabolism, each bowel movement weighs about 100 to 250 grams (or about .5lbs). As surprising as it might be, feces is made of many constituents. To begin, 75% of feces consists mostly of water. Yes, you read it right. It's just plain old water. The 25% left is solid matter.

This solid matter is also made out of many constituents. Dead bacteria makes up 30% of the solid matter. Another 30% is given to indigestible substances, such as cellulose. From 10 to 20% of the solid matter are cholesterol and other fats. Then there is roughly 10 to 20% inorganic compounds, such as phosphate and calcium, that our body dearly needs but can only absorb in very limited quantities. Finally, our solid matter is composed from 2 to 3 percent protein (that’s why dogs who lack nutrients eat poop: poop is full of nutrients!). There are also a few more superficial ingredients in poop: some cell debris from the mucus membrane in the intestinal tract, bile pigments, and dead leucocytes also end up in our poop.

Getting to an interesting part now:

Why is our poop brown?

The reason is actually quite simple. As you all know, there are lots or bacteria in our digestive tract. Bacteria’s action on bilirubin, a pigment generated by the breakdown of hemoglobin in our liver and bone marrow, is the main reason for a turd to be brown. It is also bacterial action that gives poo its very…particular odor.

Most people today say that feces are "gross,’’ but fecal material is everywhere. Didn’t you know? if you don’t believe me, this comes straight from the Centers for Disease Control. For example, after a research in Atlanta-area public pools, fecal matter, in this case the gastrointestinal E. coli bacteria showed in 93 of these pools (58%). But don’t freak-out (yet), the bacteria didn’t make anyone sick. Ultimately, if the staff are cleaning to pools as they should (using the proper chemicals) you shouldn't have anything to worry about.

(Yes, the pun was intended). The good news in this (yes, there is some) is that, as far as your personal objects go, the fecal matter on them would mostly be your own, so no biggie. "Every gluteal fold [butt crack] has poop in it’’ says Chuck Gerba, a microbiologist from the University of Arizona. More specifically, there is about one tenth of a gram of poop in each butt crack (about a quarter of a peanut). From there, about 500 million E. coli bacteria transfer to our underwear, and then into the laundry water, spreading over all of our other clothing and our hands when we put the load in the dryer.  Then from our hands, the fecal matter is free to go where many feces have bravely gone before: Everywhere. Now would be the time to freak out. But don't. We have been covered in feces since always, and we always will be...and we turned out pretty well, all things considered.

Then, of course, there is the aerosolization  of feces – it’s what we get when we flush the toilet, thus creating an invisible fecal mist. Yup, a fecal mist of water containing fecal material, material which splashes all over the place (the sink, the floor, the toothbursh that's sitting on the sink counter, and even on ourselves). Now, you could try to protect yourself by quickly zipping up, flushing, and running away, but sadly, this won’t help you much: Traces of fecal matter remain in the air for about two hours, meaning that you are infected by your predecessors from the moment entering the bathroom stall.

But really, there should be no worries about your own poop; it’s other people’s and animal’s poop that you should be worried about, that’s where potentially harmful bacteria lie. As far as we know, everybody is always covered with their own dung (and it isn’t everybody that has appropriate hand hygiene), and that’s why diseases get transmitted. Public faucets, for example, are very contaminated, and so are elevator buttons and ATMs, and I won’t even mention children, who are basically walking fecal matter delivery services.

No one can succeed living fecal-matter free. Nobody. Really, I've tried. But there are some precautions you can take to not get sick in other’s poop:

1.   Don’t be too paranoid.
2.   Use bleach on cutting boards and kitchen sinks: it will not cause any antibiotic resistance and will kill the germs.
3.   Use hand sanitizers now and then, especially after using the restroom (aka unknown poop land). Using sanitizers once or twice a day is just enough (any more and you’ll be hopping towards number 1).
4.   Sanitize children’s hands (after touching every touchable thing in the surroundings, you really should).
5.   If you swim in a public pool, try doing it before everybody else and especially before summer camps and swimming lessons.

Wonder how poop revolutionized our understanding of the universe and its origin? Find out here. You can also follow us on twitter to never miss an article.