A Test for Loop Quantum Gravity 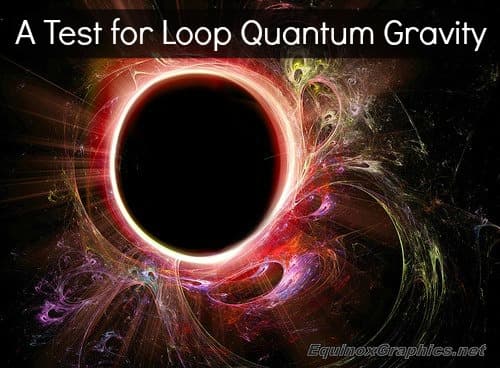 Abbreviated LQG, this hypothesis is one of several aiming to understand gravity at the quantum level. This would allow us to unify the four fundamental forces of nature as is required by Grand Unified Theory (or, the Theory of Everything). Under a LQG universe, spacetime is granular, figuratively a very thin fabric of finite loop woven together. These loops exist at the Planck length and give an atomic structure to space itself. That is your introduction to LQG, considering the fact that there is an entire field of science devoted to this possible aspect of reality, I’ll return to the meat of the subject – devising a test to figure out whether or not LQG exists.

One of the issues with many of our hypotheses which attempt to reconcile general relativity with quantum mechanics is testability; after all “well, why not” isn’t a very scientific answer. A French-American team of scientists has published a study proposing an experimental test for loop quantum gravity centered around black holes – specifically, Hawking radiation.

Hawking radiation is black body radiation that was predicted to emanate from black holes by Stephen Hawking. This ‘evaporation’ is due to quantum effects that exist near the event horizon (primarily seen in the uncertainty principle for rotating black holes).

What’s the catch? Hawking radiation has yet to be observed. In fact, scientists have yet to detect any type of radiation emanating from a black hole; this poses a slight and understandable problem, but one that’s possible to solve.

The research team was able to effectively demonstrate that black holes should reveal signatures of LQG – a footprint if you will. This footprint appears in features seen in the energy spectrum of a black hole. Fantastically enough, the team was able to devise a test which is able to effectively make two predictions. One for what we would expect to see in a universe with loop quantum gravity and a second for what we would expect to see if loop quantum gravity was just a clever figment of our imaginations.

But, again, algorithms and equations can only take us so far, experimentally proving or disproving LQG using Hawking radiation is another story. But it just so happens that black holes might not be the only way to probe LQG. The research team is investigating other cosmological entities, such as the cosmic microwave background, to see if we can study LQG from there. Then again, we could find a way to detect Hawking radiation between now and then, which would certainly be very helpful.

To close, I think Aurélien Barrau, one of the coauthors on the paper, puts it best, “For decades, Planck-scale physics has been thought to be untestable. Nowadays, it seems that it might enter the realm of experimental physics! This is very exciting, especially in the appealing framework of loop quantum gravity.”