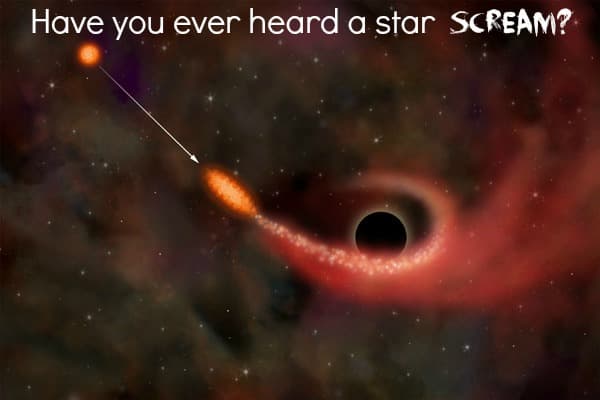 Have you ever heard a star scream?

Neither have scientists, but they have come close. 3.9 billion light-years away, there is a star getting ripped apart by a supermassive black hole. Every 200 or so seconds, this star releases bursts of light that scientists liken to cries of torment as it nears the end of its life.

As a star approaches a black hole, the outer layers of the star are stripped away and the star is ‘spaghettified’. The stripped material begins to orbit the black hole and forms a region known as the accretion disk. The material continues to spiral into the black hole in the same way water is drained from the sink. Just as water closer to the drain ‘orbits’ faster, so does the material in the accretion disk orbit faster as it gets closer to spinning into the black hole. The only difference is that this material orbits so quickly, it is super heated and, as a result, some of it is ejected back into space in two massive jets.

Death Cries of a Dying Star:

So, if you could hear the stars last calls for help, what would it sound like? When this particular frequency is converted to sound, it would make an ultra-low D-sharp. This isn’t a unique situation either, similar pulses have been seen from matter as it is gobbled up by both large and small black holes. Rubens Reis, one of the project leaders, says, "This is telling us that the same physical phenomenon we observe in stellar mass black holes is also observed in black holes a million times the mass of the sun, and also for black holes that were previously asleep (not consuming matter). It speaks to the invariant nature of physics, which I think is very beautiful."

Because, you know, there is no beauty more profound than watching something get torn apart by a black hole.