A Moving Sail Bridge Concept is Transforming the Future of Architecture

A bridge to the future of architectural design. 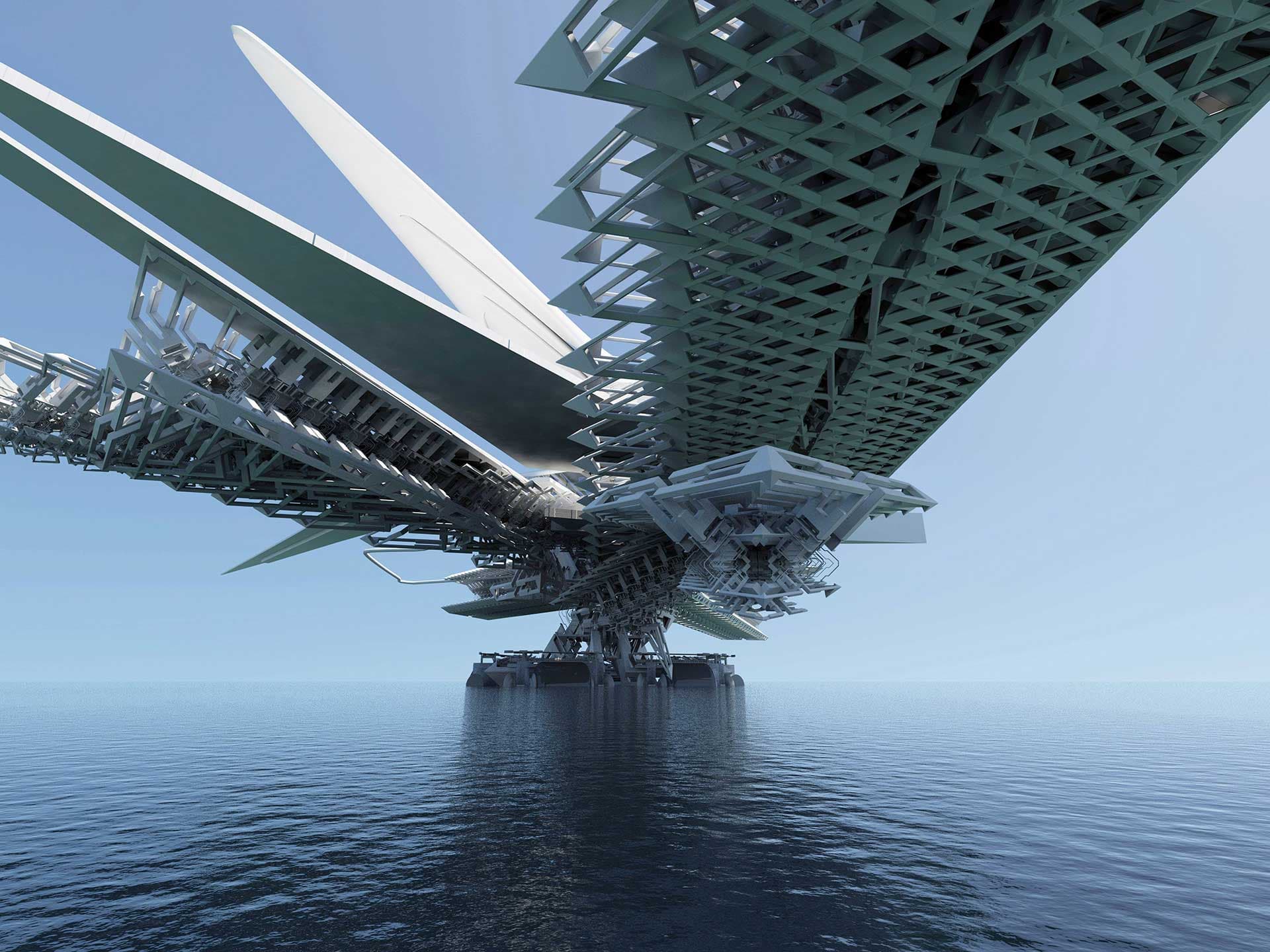 Science fiction is full of intriguing structures, from floating cities to organic megastructures that often make us wonder if these types of "buildings" could be feasible in our world. These futuristic structures have often inspired today's architects to push the boundaries of both materials and technology. Often, these architects create both beautiful and interesting designs like the newly created moving sail bridge concept by Margot Krasojević.

Commissioned by the city of Ordos in Mongolia — which is known for its elaborate government projects — Krasojević's bridge is an impressive bit of architecture designed as a potential bridge for the Wulanmulun River. The design concept is a floating bridge that folds, making it possible to move it either by rowing or by sail to wherever it would be needed.

Its three expandable walkways and carbon fiber triple sail make it look like it belongs to some dystopian future, or as New Atlas reports, like a dragonfly transformer. To complete the futuristic feel, the bridge's walkways are lined with solar panels which make the structure capable of generating its own power.

This floating bridge is one example of transforming structures. A similar concept features a transforming home, capable of changing shape depending on the weather. Structures like these challenge today's notion of what makes good design. Not only are these structures futuristic, they will also help to make the future more efficient and green.

Advances in engineering, technologies, as well as the availability of materials previously unheard of increases the chances that such structures might actually be built. For example, it's now possible to build a house or an office using just a 3D-printer — bringing projects like Dubai's 3D-printed skyscraper closer to reality.

Other ideas include a drone-flying house, a house with walls and floors made of "malleable skin" that transforms using an app, and DARPA's concept of a self-repairing house. There's also the concept of a "sea tree," an artificially built wildlife skyscraper. However, there are designs, like the floating skyscraper concept, are too dangerous to come to fruition.

Whether this floating bridge and other futuristic structure concepts will ever be built or not, one thing seems clear: the future of architecture isn't static. These moveable and transforming structures might just be what the cities of the future need.

Read This Next
Futurism
Empowering Citizens: Experts Predict the Future of Our Urban Cities [Sponsored]
Futurism
Apple Employees Keep Walking Into Windows at High-Tech New Headquarters
Futurism
Tree Skyscrapers and Underwater Restaurants: See the Most Futuristic Designs of the Year
Futurism
A Robot Can Print This $64,000 House in as Little as Eight Hours
Futurism
Architects Design a Flood-Proof Parking Garage That Rises as It Rains
More on Future Society
Phoney Business
Yesterday on the byte
Amazon Says It'll Pay You $2 Per Month to Spy on Your Phone's Internet Traffic
Elon Tusk
Yesterday on the byte
Rick and Morty Fans Now Embarrassed by Elon Musk's "Cringe" Cameo
Dirty Bird
Yesterday on the byte
Twitter HQ May Sink Into Literal Filth as Its Janitors Go on Strike
READ MORE STORIES ABOUT / Future Society
Keep up.
Subscribe to our daily newsletter to keep in touch with the subjects shaping our future.
+Social+Newsletter
TopicsAbout UsContact Us
Copyright ©, Camden Media Inc All Rights Reserved. See our User Agreement, Privacy Policy and Data Use Policy. The material on this site may not be reproduced, distributed, transmitted, cached or otherwise used, except with prior written permission of Futurism. Articles may contain affiliate links which enable us to share in the revenue of any purchases made.
Fonts by Typekit and Monotype.