It's literally out of this world. Maybe too much. 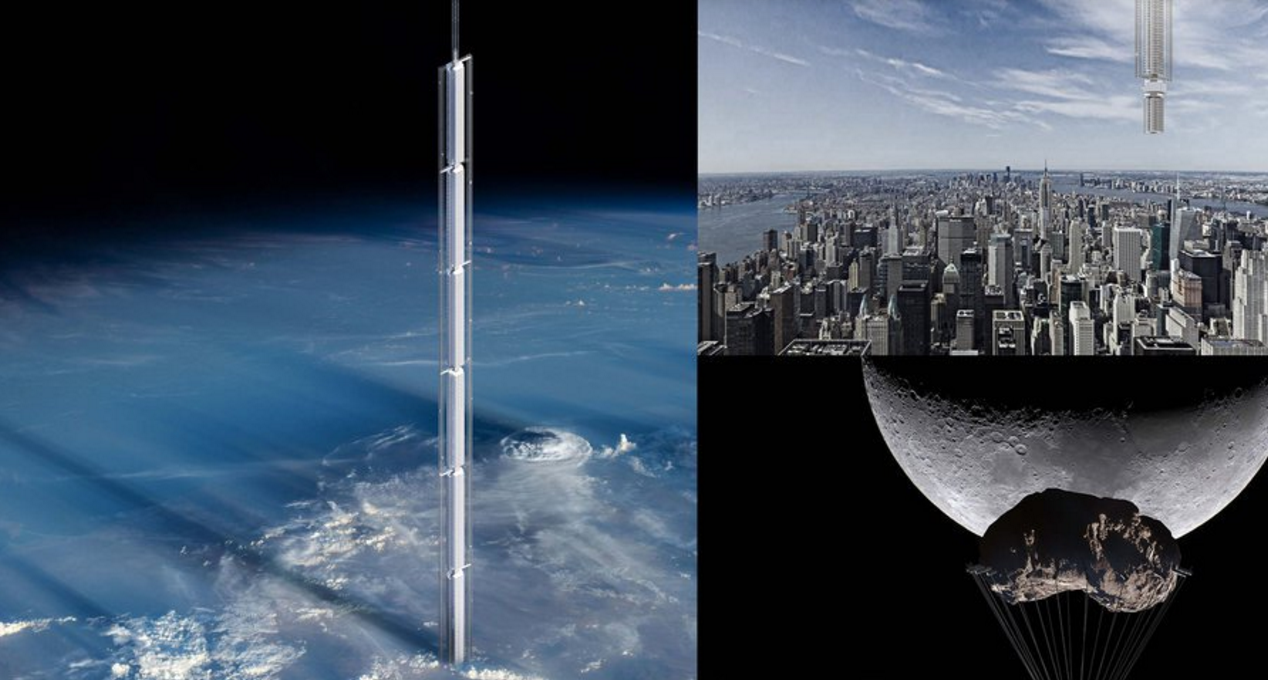 "To go where no man has gone before" is a motto that resonates at the heart of many futurists and Trekkies (or Trekkers). The sentiment certainly seems to be the idea behind a design for an out-of-this-world building concept that brings out the literal meaning of "skyscraper."

From the minds at Clouds Architecture Office, the Analemma Tower is designed to be the future of structural form. Suspended from an orbiting asteroid via super-strong cables, the Analemma rises — or falls down, depending on your perspective — more than 32,000 meters (104,987 feet) high.

"Analemma inverts the traditional diagram of an earth-based foundation, instead depending on a space-based supporting foundation from which the tower is suspended," according to Clouds Architecture. This system, they say, is referred to as the "Universal Orbital Support System (UOSS)."

The building would be powered by space-based solar panels and be divided into nine sections. The top three levels, closer to its asteroid-base, are the funerary, reliquary, and worship sections. The very bottom, the part the scrapes the Earth's sky, is an entertainment area where guests and residents can shop and dine. Above that is a business and commercial section, while a huge section of the tower is residential.

The Analemma would follow a "geosynchronous orbit matches Earth's sidereal rotation period of one day," according to Clouds Architecture. "The tower's position in the sky traces out a path in a figure-8 form, returning the tower to exactly the same position in the sky each day."

There's just one problem: You would absolutely die on this skyscraper. Also, we aren't good enough at physics to make this work....okay, so two problems.

Head in the Clouds?

An orbiting building that people can parachute from seems like a good idea, and it is...until it isn't. Not only would its absurd location demand incredibly high prices — prices that are unprecedented in the history of real estate — the very concept itself raises a number of concerns.

First, there's no air, so you'd probably asphyxiate. Second, it's not really clear how gravity would work on this. Theoretically, the asteroid would be big enough to keep you tethered to the rock (and inside the skyscraper), but given that the skyscraper is so close to Earth, it's not looking good.

Never mind the absurd precision needed to get an asteroid to follow an artificial orbit this close to our own planet, what about making sure that the asteroid survives and doesn't hit other space objects? Space debris, anyone?

There's just too much uncertainty (and, you know, physics) that keeps the Analemma from being a good idea for future cities and future worlds. Fortunately! Clouds Architecture isn't the only one with ideas for what the cities of the future will look like. There are a number of viable options, such as cities floating on water and concepts for colonies on Mars. Then there's also plans for colonies on the Moon, including the ESA's "Moon Village." As for skyscraper ideas, Dubai's 3D-printed buildings are a bit more probable than the Analemma.

In any case, it's fun to imagine how the future will look. While we may not put our money on the the Analemma Tower, it may well inspire some ideas that are worth investing in.

Read This Next
Futurism
Empowering Citizens: Experts Predict the Future of Our Urban Cities [Sponsored]
Futurism
A Moving Sail Bridge Concept is Transforming the Future of Architecture
Futurism
Rethinking Elevators Could Transform Cities as We Know Them
Futurism
Architects Reveal What They Think "The City of the Future" Will Look Like
Futurism
This 3D-Printed, Three-Miles-Tall Skyscraper Could Clean Itself
More on Future Society
Bird Crap
Yesterday on the byte
It Looks Like Elon Musk Is Actually Building a Twitter Payment Platform
Balloon News
Friday on futurism
China Says "Spy Balloon" Soaring Over America Is Completely Innocent
Down in Flames
Wednesday on the byte
Elon Musk Apparently Thinks Twitter Is a "Flaming Dumpster Rolling Down the Street"
READ MORE STORIES ABOUT / Future Society
Keep up.
Subscribe to our daily newsletter to keep in touch with the subjects shaping our future.
+Social+Newsletter
TopicsAbout UsContact Us
Copyright ©, Camden Media Inc All Rights Reserved. See our User Agreement, Privacy Policy and Data Use Policy. The material on this site may not be reproduced, distributed, transmitted, cached or otherwise used, except with prior written permission of Futurism. Articles may contain affiliate links which enable us to share in the revenue of any purchases made.
Fonts by Typekit and Monotype.