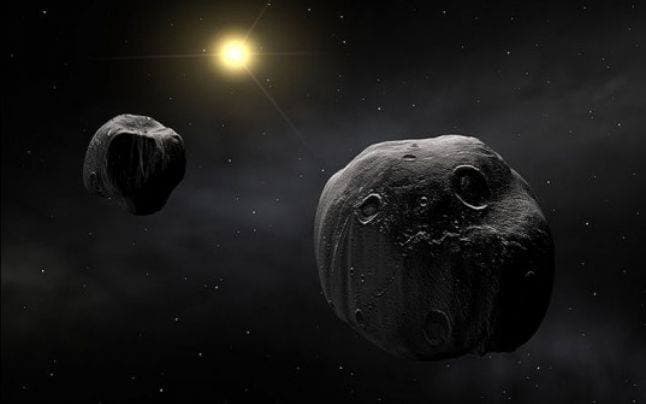 Somewhere beyond the orbit of Neptune is a treasure-trove just waiting to be opened – and I’m not talking about Pluto. Astronomers have identified the trans-Neptunian object 2010 WG9; it’s certainly an awesome find. Dr. David Rabinowitz believes 2010 WG9 isn’t any regular trans-Neptunian object, but rather an object from the Oort cloud that has ventured closer to home.

As you’re all probably aware, the Oort cloud is the region of the solar system where comets originate. These planetesimals are remnants from the formation of the solar system. Hidden within their icy surface are answers to some of our most profound questions regarding that important period of our history. Currently, scientists are forced to study these clues from afar in the corona of passing comets – astronomers are presented with a brief window to study our origins as the clues are blasted off into interstellar space only to be lost forever.

Ideally, we’d go to the Oort cloud to sample and study these planetesimals before they are melted by our Sun. The only problem with that plan is the Oort cloud is between 1-2 light-years away, that isn’t exactly a short trip. This is where the full value of 2010 WG9 is realized. Here, a piece of the Oort cloud basically came to us, but it gets better. Astronomers believe 2010 WG9 has spent most of its life orbiting at distances at least 25 times further from the Sun than Pluto – or orbiting at distances greater than 1000 AU. For the foreseeable future, 2010 WG9 is not going to approach closer to the Sun than the orbit of Uranus.

Even though this object isn’t exactly next door, it is close enough to make a mission feasible. This would give scientists the opportunity to study the original surface of a planetesimal – a surface that’s on the order of 4.5-billion years old, containing the secrets of the conditions of the solar system at the time of its formation.