Your Body Is an Evolutionary Scrapbook 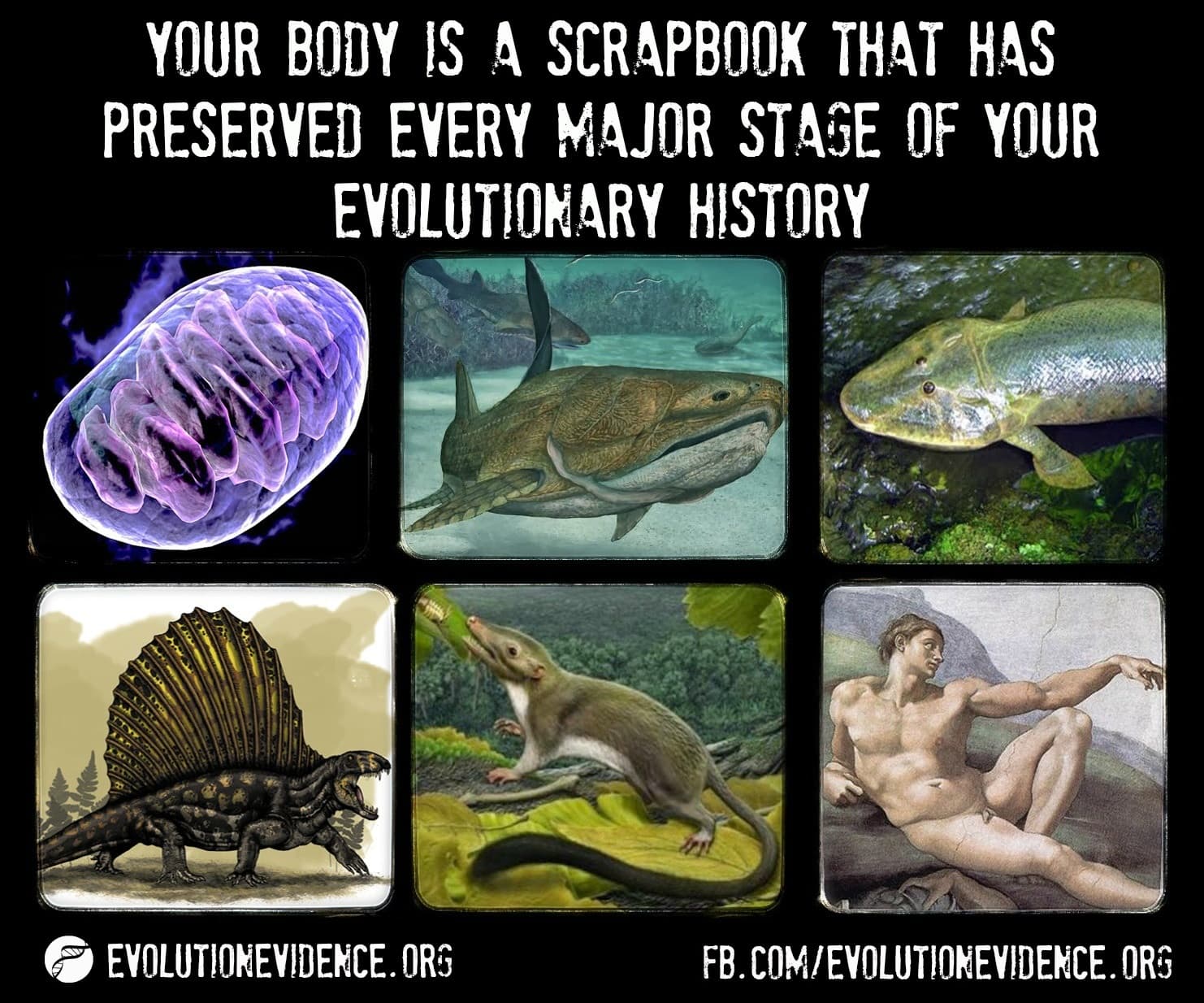 Your body is a scrapbook that contains the history of every major stage your ancestors have gone through - from bacteria, to creatures of the sea, to land-dwelling amphibians, to mammals, to primates, and finally; to hominins.  Exploring this truth is one of the most personal, exciting, interactive, and affordable labs you can participate in!  Let's flip through a few of the more interesting and memorable pages of your personal body scrapbook.

The energy that powers your body mostly comes from the tireless chemical work of tiny organelles inside your cells, called mitochondria.  What’s fascinating about mitochondria is that they have distinctly bacterial genomes, ribosomes, and cell membranes.  Everything about them says that they were once bacteria, bacterial that has adapted to be able to coexist inside your body.  The integration of mitochondrial bacteria into our ancestors took place roughly 2 billion years ago back; when our ancestors were also bacteria.

In the earliest stages of your fetal development, you looked everything like one of your fish ancestors. You had gills, a yolk sac, a tail, and your eyes were on the side of your head.  Your adult form also carries signs of our aquatic origins. The recurrent laryngeal nerve that descends from your brain, down around your aorta, and back up to your larynx was once situated in the body in a straight line (rather than the unnecessary loop it is now) from the brain, past the heart to the gills.  Now, however, your set up has gradually changed as your ancestors came onto the land, but the nerve set up did not.  Even the fact that you later shed your baby teeth is a trait kept since your aquatic days.

The next time you look in the mirror, take a look at the center corner of your eye.  You’ll notice a small patch of pink called the plica semilunaris.  This is the remnant of a nictitating membrane, which likely first protected your ancestors eyes as they were hunting down prey in the ancient oceans.

Did you know that every time you hiccup, you act out a behavior dating back to your ancestor’s amphibian days?  The hiccup reflex is identical to that used by amphibians to switch between breathing air with lungs to using gills to obtain oxygen from water.  The stimulation of the phrenic nerve, the snapping shut of the epiglottis, and the inhalation of the lungs all date back to when our ancestors were just starting to transition to a terrestrial life-form.  If you take a look at your hands and feet, the fact that you likely have five fingers tells of your amphibian descent.  The trait of having five fingers, known as pentadactyl, is shared by pretty much all vertebrates with four appendages.

You hear with your ancestor’s reptilian jaw.  There is very robust fossil evidence to support the notion that your inner ear’s bone structure evolved from the three bones that once made up a our reptilian ancestor’s composite jaw.

Fossil evidence also indicates that we still share several characteristics that can be linked to primordial reptiles. For instance, it was recently revealed that the four pumping chambers that make up the human heart likely took shape using the same genetic mechanism once employed by lizards and turtles.

Our body is absolutely covered in mammalian history.  If you were to get down on all fours, your body hair would all point down to aid rainwater dripping from your skin.  When scared or cold, our body sticks its hair up into goosebumps, a trait formerly useful when we had more hair and needed to stay warm or appear larger and more intimidating to predators.  Many babies are born with a vestigial layer of hair all over their body called lanugo (a fact that frightens many new parents!). This trait can also be seen with malnourished children and adults (particularly with those suffering from an eating disorder). Our sweat glands are distributed in such a way that we sweat the most on the small of our back, a trait that was ideal when we walked on all fours. Our ears have muscles that, in some, still work to direct ears that no longer rotate.

Approximately 10% of the population will find something called “Darwin’s tubercle,” at the top of their ear. This tiny bump (pictured on the left) was once the peak of the pointed ears still seen on many of our cousins.  Inside our nose is the vestigial pit of a vomeronasal organ. It was formerly used to smell a mate’s pheromones.  After birth, the testicles of male humans descend outside the body to cool to their ideal sperm production temperature. They then exit the abdominal cavity in an often defective, or contrived manner; through the inguinal canal that leaves many men with painful hernias later in life.  Our scapulas and plantaris muscles are both designed to be used in tree climbing.  Smile in the mirror and you’ll see the canines left over from our predatory ancestors.  O, and who can forget everyone’s favorite, the appendix. It is sometimes helpful in storing “good” bacteria, but often times, it is easily clogged. The organ itself is a remnant from our ancestor’s plant pulp digestion days.