You Are More than Stardust; You Are the Universe. 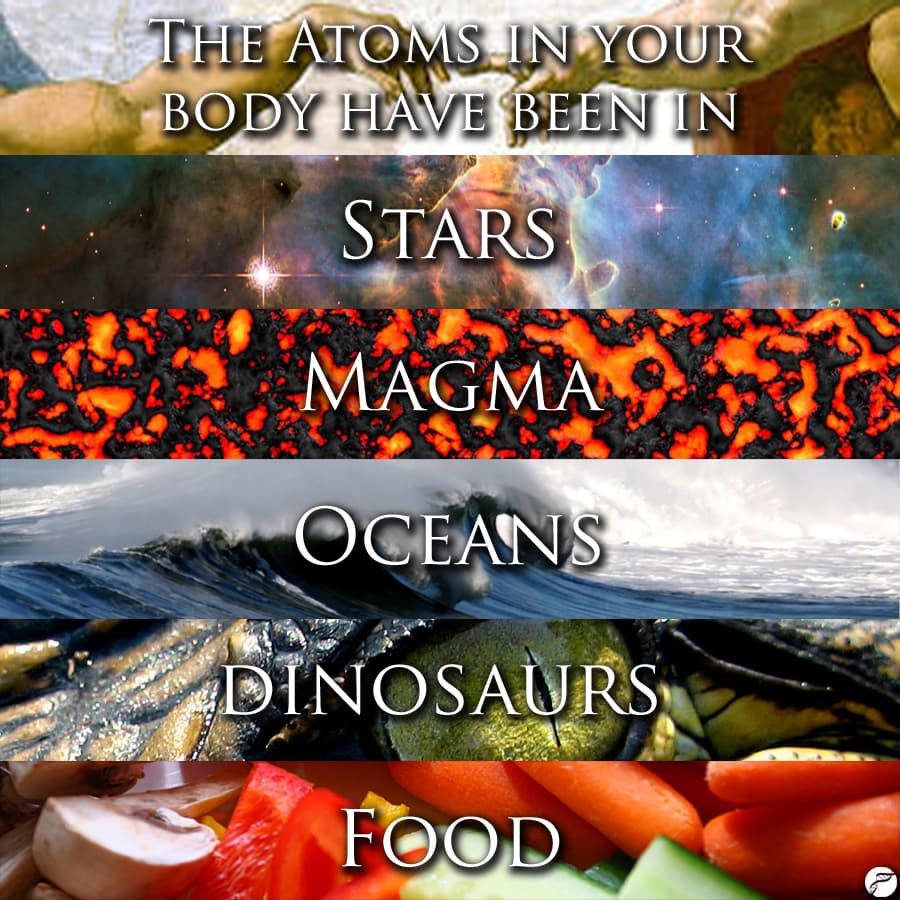 Carl Sagan, one of our generation's greatest science educators, popularized one unbelievable fact—we are stardust.  Meaning, most of the atoms in our body were formed inside of stars, supernovae, and neutron star collisions.  It is a profound truth that makes me look at the calcium in my bones, the iron circulating in my blood, and the metal ring on my finger in a new, eye-opening way.  Astrophysicist Neil deGrasse Tyson aptly conveys the magnitude of this:

“Recognize that the very molecules that make up your body, the atoms that construct the molecules, are traceable to the crucibles that were once the centers of high mass stars that exploded their chemically rich guts into the galaxy, enriching pristine gas clouds with the chemistry of life. So that we are all connected to each other biologically, to the earth chemically and to the rest of the universe atomically. That’s kinda cool! That makes me smile and I actually feel quite large at the end of that. It’s not that we are better than the universe, we are part of the universe. We are in the universe and the universe is in us.”

As profound as this is, there's more!  As a lover of Big History, your atoms have had an amazing journey that I want to share a few snapshots from!

13.7 billion years ago, time and space manifested in the event to beat all events: the big bang.  300 thousand years after the universe was born, the first atoms formed from the seething froth of subatomic particles.  200 million years later, the first stars ignited and fusion began as gravity pressure-cooked hydrogen atoms into heavier elements.  The calcium in your bones and the iron in your blood were likely forged within the cores of this generations of stars. Heavier elements—like silver and gold—were produced in neutron star collisions or in the heart of massive stars, which exploded in a glorious blaze, called supernovae, burning brighter than an entire galaxy.

After several generations of stars were born, and went out as supernovae (around 5 billion years ago), the material that would some day become our solar system began to coalesce. At first, the atoms, which were to become your body much later on, were locked up in asteroids and meteoroids—spiraling around the protostar that has since become the Sun; These began to group together to form planets.

The pressure of gravity, radioactive decay, and the force of asteroid impacts drove the temperature of our planet so high, the surface of Earth became a cauldron of molten lava.  The atoms of your body were once seething in this volcanic cauldron, where they remained for eons.

This boiling planet would burp gases into the atmosphere and water-rich comets would pelt the Earth until enough water accumulated, and cool rain fell down upon the surface of Earth for the first time, eventually forming the first oceans.  Recent finds of a zircon crystal in Western Australia support the hypothesis that the first oceans could have started to form some 4.3 billion years ago.

These oceans became enriched by Earth and the still falling meteorites that often contained complex organic molecules.  It's entirely possible that were it not for these compounds, which were created by the unique chemical environment of space and its associated energetic radiation bath, we would not be here now.  From this soup of organic compounds, liquid water pooled—and the first lifeform emerged somewhere on this planet.

Based on the number of atoms in the atmosphere, how fast they diffuse, and how many we breathe in throughout our lifetime, there is a very good chance that we have breathed in an atom that a dinosaur once exhaled.  Furthermore, if it wasn’t us that breathed it in, perhaps a plant or animal we’ve consumed did through photosynthesis or respiration.

Bill Bryson, in his book A Short History of Nearly Everything, says that it has been estimated that roughly a billion of the atoms in your body were once in the bodies of other historical figures such as Julius Caesar, Shakespeare, Ghengis Khan, Budda, Jesus, and many more!  It's a sheer numbers game—when you have 7 x 10^27 atoms in your body (which we do) and they are regularly exchanged into the atmosphere, then given enough time we are all atomically connected!

You are what you eat!  Before they were in you, some of the atoms in your body were on a farm in a place like Nebraska, France, Argentina, California, or the Philippines!

What else should make it on this list?!  Surely there’s more! If you're fascinated with the history of our universe please check out these informative and engaging resources: www.chronozoom.com & www.bighistoryproject.com