Worst Places to Get Stung by a Bee, Self-Experimentation 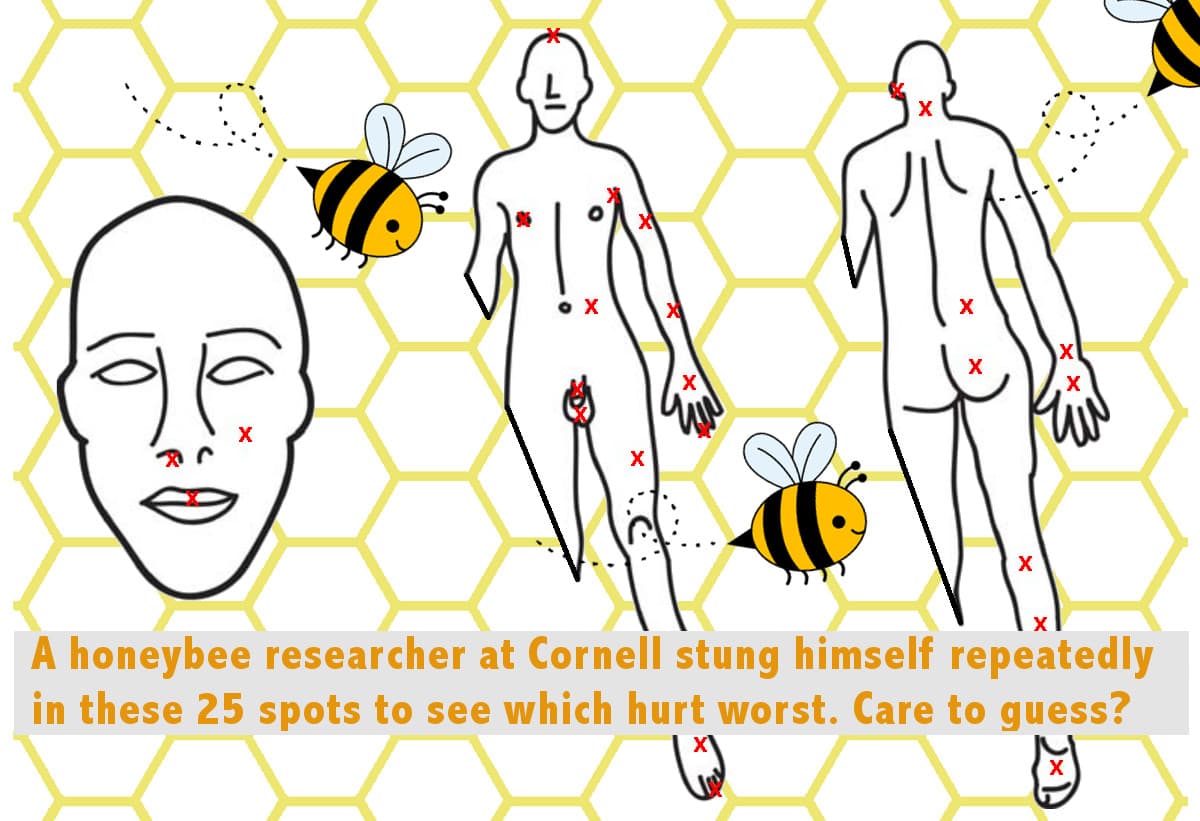 X's mark the spots where Cornell researcher Michael Smith pressed honeybees to his skin in the name of science. We might all expect a sting to the genitals to hurt more than one to the arm, but how exactly does pain vary across the body? Take a moment to ponder it yourself. Where on the map do you think would hurt most, and what about the least? If stinging insects are readily available to you, feel free to conduct your own experiment. Click the “Show Results” bar below to display Smith’s findings, and read on to learn what drove him to this self-experimentation.

Smith normally researches honeybee behavior as a graduate student in Cornell’s Department of Neurobiology and Behavior. "I’m interested in sociogenisis,” he says, “In how colonies of social insects change as they develop.” He likens a honeybee colony to a single organism and its millions of cells. A creature develops as its cell population changes over time, as does a honeybee colony as its population of bees changes. “As the bees grow, they develop, they go through puberty, they reproduce, and they die. I'm interested in how the colony changes throughout that development.”

Working with bees on a daily basis, Smith has received more than a few incidental doses of apitoxin, the honeybee’s venom. But when trading attacks stories, he and his advisor found that neither had been stung in their most sensitive areas. Undoubtedly sensing this curiosity, a bee flew up Smith’s shorts and stung him in the testicle shortly after this conversation. “It didn't hurt as much as I thought it would,” he says, “Which got me thinking, ‘I wonder how pain varies on different parts of your body.' And if you were to standardize the sting, would it be just as painful no matter what had been stung? Are there places that would give the bee more bang for her buck?”

Personal experience assures us that different parts of the body are more sensitive to pain than others, but quantifying this variation is not straightforward. And there were, shockingly, no existing studies on bee sting pain by location. However, there has been research on variation in the sting painfulness of 78 species of bees, wasps, and ants. The Schmidt Sting Pain Index, compiled from incidental stings over years of fieldwork by entomologist Justin Schmidt, ranges from 0 (sting can’t penetrate human skin) to 4 (like fire-walking over flaming charcoal with a 3-inch rusty nail grinding into your heel, courtesy of the bullet ant). The honeybee sting, known the world over, was given a rating of 2 and used as a reference by which to judge stings of other insects.

Schmidt’s stings happened by chance, so there was no accounting for how painfulness varied by sting site. Michael Smith designed this side project as an extension to the Schmidt Pain Index. To conduct the experiment, 25 sting sites were selected and Smith self-administered 5 stings per day over 3 months. Only guard bees were selected in an attempt to standardize the sting as best as possible. Guards are a specific caste of bees that can be found at the entrance of the hive, easily identified by a distinctive stance. Honeybee castes are based on age, and guard duty is the final domestic task before taking on the most dangerous job of foraging. By selected guards, Smith was sure to get bees with fully developed venom glands and an eagerness to deploy them.

75 stings later, Smith found that, indeed, some places hurt more than others. “Stings to the nostril were especially violent, immediately inducing sneezing, tears and a copious flow of mucus,” the paper states. That he stung himself twice more in the nostril is perhaps more a measure of dedication than statistical significance. After the nostril, stings to the upper lip and penis shaft were most painful. The skull, middle toe, and upper arm came in last. See the table above for complete results.

Now, why pain varies is an entirely different question. Skin thickness or neural connectivity may be somewhat correlated to pain sensitively, but neither matches Smith’s data perfectly. While the most painful locations do have the thinnest skin, the least painful don’t have the thickest. And while the middle finger and the lips have a similar number of neurons devoted to them, the upper lip hurt far worse. So a pain map of the body might look like a sensory map combined with skin thickness. Of course, Smith’s results can’t be generalized to everyone, and the limitations of his singular sample size are made clear in the paper. The results are interesting nonetheless given the dearth of similar pain studies.

Around the world, honeybee workers are abandoning their colonies at an alarming rate. This phenomenon has been dubbed Colony Collapse Disorder (CCD), and scientists are at a loss to explain it. The only truism that has emerged from research on CCD is that there isn't a single cause. Pesticides, parasites, disease, poor nutrition, poor genetic quality, and poor honeybee management have all been implicated. Each is a stressor that likely contributes, but how to rank the list and what to do about it remains unclear.

In the midst of governmental pesticide bans and subsequent lawsuits by chemical companies, I asked Smith what the average person can do to support the bees:

I would say two things. One: Buy local honey. Because if you're supporting local beekeepers, you're supporting local bees. And two, plant more flowers that are bee friendly. Every time you see a lawn, a beautiful, green, manicured lawn full of pesticides, that's basically a food desert for a honeybee. So I think 'going green' definitely involves more colors. I'd like to see more wildflowers out there. The bees are not going to attack you. Maybe my study might make you think you're going to get attacked, but you're really not. They're really quite docile unless they're perturbed.