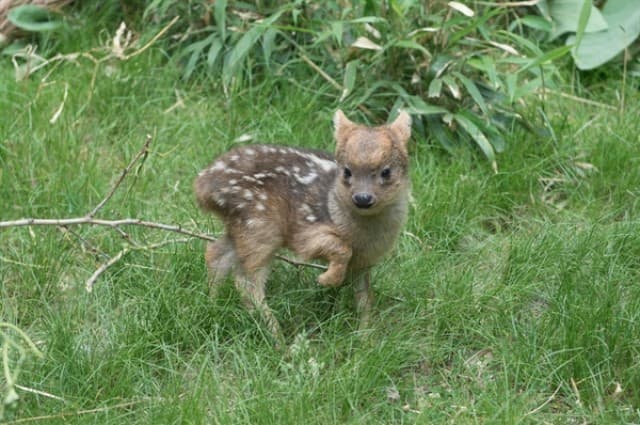 There are a number of articles on the worlds deadliest and ugliest creatures. But every now and again, you just need a little reminder that nature is often very beautiful. This is one of those times.

This is the worlds smallest deer, or at least, is the one of the latest members of our planet's smallest deer species. The little guy was born just last month, May 12th, at Queens Zoo in New York City. He is a southern pudu fawn (Pudu puda), and was only about 6 inches at birth (15 centimeters). When he was born, you could have easily held him in one hand, as he came in at just 1 pound (0.45 kilograms ).

Of course, this story isn't all happiness. Like many species, southern pudu have suffered as a result of human practices such as industrialization and deforestation. They are currently listed as "vulnerable" by the International Union for the Conservation of Nature (IUCN). According to the IUCN, a number of issues have contributed to the decline of the pudu. Some of these include logging, poaching, hunting, and competition with domestic livestock.

Of particular note is the poaching. They are highly sought after for their skins, and many foreigners want them as pets (do not buy one of these or capture them to keep as pets).

According to the IUCN, ultimately, it is believed that there are just 10,000 of these animals left alive today. Fortunately, many are working to help the pudu. The Queens Zoo breeds pudu in order to help with the species vulnerable situation. They do their work as part of the Species Survival Program (SSP) which, as the press release notes, is "a cooperative breeding program designed to enhance the genetic viability and demographic stability of animal populations in zoos accredited by the Association of Zoos and Aquariums."

The Wildlife Conservation Society  notes that the fawn is still nursing from his mother but will move onto eating leaves, kale, grains, and hay as he grows.

As an interesting aside, when frightened, they bark.