Makers of the World’s Largest Airplane Have Extraterrestrial Ambitions

Air travel isn't enough for the Stratolaunch. It may eventually be paired with a brand new space shuttle. 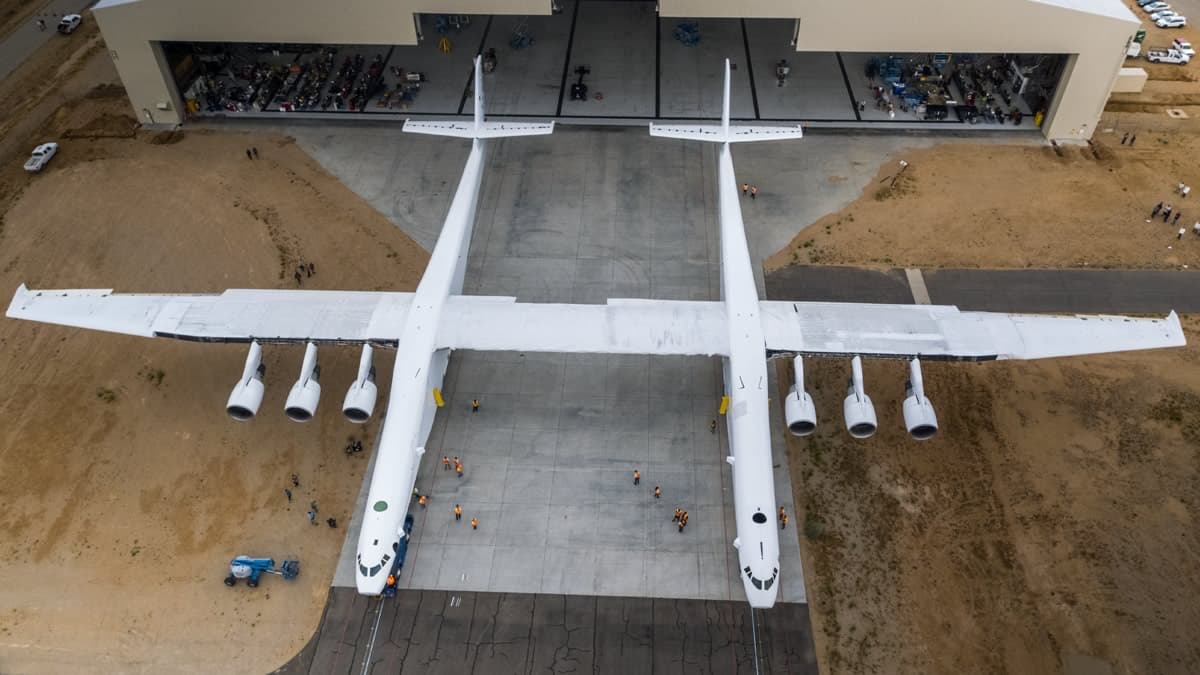 The Stratolaunch is sizing up to be the world’s largest airplane. Last year, entrepreneur Paul Allen revealed that the plane will have a massive wingspan of 117 meters (385 feet), but since the announcement details regarding what the aircraft would be used for have been scarce — until now. New information coming from an interview Allen did with The Washington Post finally brings the plane’s purpose into focus.

Instead of making a massive plane just to be able to carry more people and cargo around the world, Allen wants to use the Stratolaunch to transport and launch a reusable space shuttle currently known internally as Black Ice.

If built, the space shuttle would be roughly the same size as the space shuttle built by NASA, and could be launched from anywhere in the world, provided that Stratolaunch could utilize a runway big enough to accommodate the plane. Black Ice would be used to carry satellites into orbit and to travel to the International Space Station (though the ISS is expected to be defunded or handed off to private companies soon).

“I would love to see us have a full reusable system and have weekly, if not more often, airport-style, repeatable operations going,” Allen said during the interview.
Essentially, the Stratolaunch would serve as launch platform and first stage of the launch, while the Black Ice would be stage two and continue its voyage using its own fuel supply. After stage two commences, the plane would land and be prepped for a future flight.

It’s still too early to say whether Black Ice is going to be built at all. Right now, all attention is on the Stratolaunch. In December, the airplane completed its low speed taxi test, demonstrating that the craft was capable of steering and stopping properly, and could safely travel down the runway at 25 knots (28 miles per hour). Its first test flight had previously been set for 2019, though The Washington Post writes it could take place later this year. Regardless of when the test flight occurs, it’s sure to be an exciting display many will tune in for.

Read This Next
Space Telescope Sale
Someone’s Selling a NASA Space Telescope on Craigslist for $10 Million
Aspics
Amazing Vid Shows What You’d See If Rockets Were Transparent
Futurism
Microsoft’s Co-Founder Just Revealed the Largest Plane in the World
More on Off World
Glimmers of Hope
Yesterday on the byte
Boeing’s Starliner Mission Is Going Surprisingly Well, Actually
Wife Guy
Yesterday on the byte
NASA Astronaut Heard Rumor of Being Abandoned in Space From His Wife
Ultimate Goodbye
Yesterday on the byte
Florida Prepares to Shoot Remains of 47 People Into Space
READ MORE STORIES ABOUT / Off World
Keep up.
Subscribe to our daily newsletter to keep in touch with the subjects shaping our future.
+Social+Newsletter
TopicsAbout UsContact Us
Copyright ©, Camden Media Inc All Rights Reserved. See our User Agreement, Privacy Policy and Data Use Policy. The material on this site may not be reproduced, distributed, transmitted, cached or otherwise used, except with prior written permission of Futurism. Fonts by Typekit and Monotype.