Amazing Vid Shows What You’d See If Rockets Were Transparent

You can even see the fuel draining out of them. 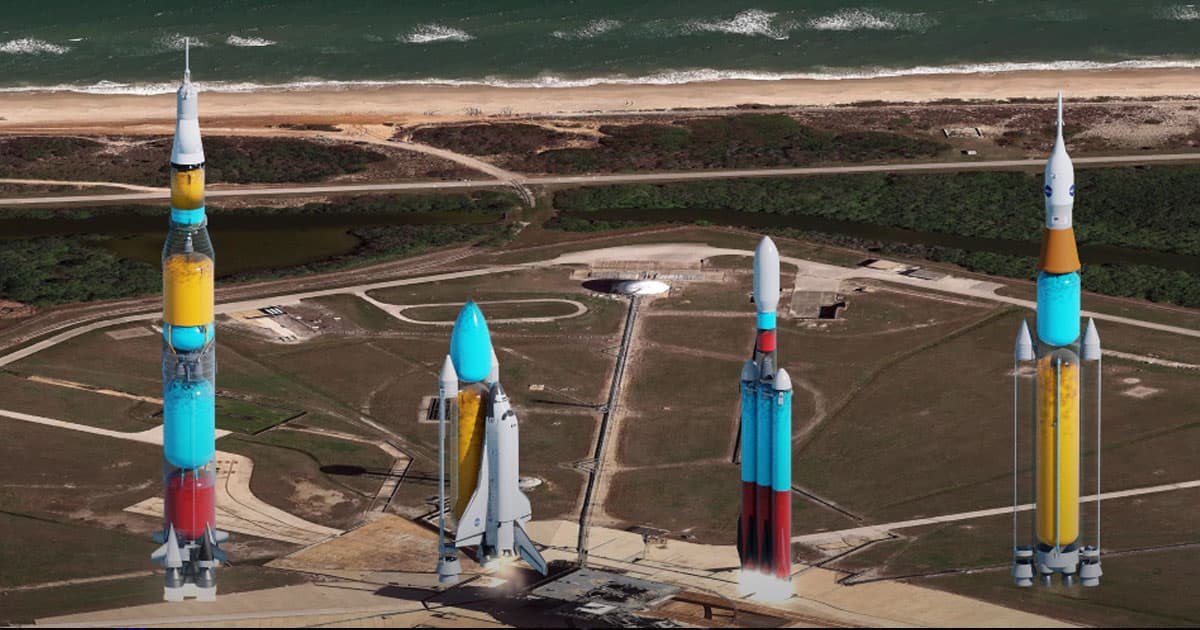 A new video shows what it would look like if four rocket types were transparent during liftoff and stage separation — even showing how the fuel drains as the rockets keep firing.

The fascinating animation compares the following four rockets from left to right:

The video color-codes a number of different rocket fuel types being used up by the rockets’ various stages.

NASA’s upcoming SLS will mix both LH2 and LOX to produce a massive amount of energy — and water.

Due to the extremely low density of LH2, NASA’s SLS would need a gigantic fuel tank. To mitigate that, designers gave the rocket two boosters on either side, a design derivative of NASA’s retired Space Shuttle.

Both SpaceX’s Falcon Heavy and the Saturn V use a refined version of kerosene as a first stage, a stage that gets jettisoned at a certain altitude.

Burning kerosene comes with a heavy toll on the environment as burning it creates immense amounts of carbon dioxide — a problem that could be compounded if SpaceX’s plan to launch a rocket every two weeks ever comes to fruition.

The animator behind the video even thought to include a tiny little red Tesla Roadster — a car famously launched into space in 2018 by SpaceX CEO Elon Musk.

Editor’s note 5/14/2020: A previous version of this story wrongly stated that SpaceX’s Heavy Falcon will carry NASA astronauts into space later this month. It will in fact be a SpaceX Falcon 9 rocket.

More on rockets: Dock a SpaceX Spacecraft to the ISS in This Amazing Simulator

Read This Next
NDA
SpaceX Reportedly Paid $250,000 to Silence Sexual Allegations Against Elon Musk
Round Trip
NASA Reveals Early Plans to Send Two Astronauts to Surface of Mars
Death Watch
Goodnight Sweet Prince: NASA is Officially Killing Its Mars Lander
Overloaded
Whiny Space Tourists Say They Were Too Busy on the Space Station
Mars Attack
Scientists Worried About Military Facility to Store NASA Mars Rocks
More on Off World
Fire Up the Backup
Yesterday on the byte
Boeing Starliner Limps Into Orbit After Two Engines Fail
That's Not Good
Wednesday on the byte
NASA Alarmed That Astronauts’ Spacesuits Keep Filling Up With Water
Tray Revolution
Tuesday on the byte
Elon Musk Spotted Seemingly Using Starship Heat Shield as Snack Tray
READ MORE STORIES ABOUT / Off World
Keep up.
Subscribe to our daily newsletter to keep in touch with the subjects shaping our future.
+Social+Newsletter
TopicsAbout UsContact Us
Copyright ©, Camden Media Inc All Rights Reserved. See our User Agreement, Privacy Policy and Data Use Policy. The material on this site may not be reproduced, distributed, transmitted, cached or otherwise used, except with prior written permission of Futurism. Fonts by Typekit and Monotype.