World First: Woman Has Tumour On Lung Removed By a Robot

Now, we have cancer fighting robots.

For the first time in UK history, a 27 year old Darlington resident’s lung tumor was successfully removed with the aid of the Da Vinci robot, which carried out the delicate stitching required for the procedure. 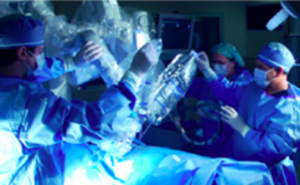 Gemma Walker, who was complaining of shortness of breath while she was 14 weeks pregnant, was found to have a tumor in her lung. Doctors from the James Cook University Hospital in Middlesbrough had to wait until she gave birth before attempting to remove the carcinoid tumor, after which she was placed under a cardiothoracic consultant, Joel Dunning.

“I had got to the stage whenever I made physical effort like climbing the stairs I was seriously out of breath. I knew something had to be done,” Walker stated.

Walker was then informed that her procedure would be carried out with the aid of a robot. While the prospect of having a machine operate on you may seem a bit scary, the perks are evident in how fast Walker was able to recover.

“This is the first time in the UK that the Da Vinci robot has been used for the removal of a tumour from the main airway of a lung. The difficulty comes in the fact that the left lung had to be disconnected from the rest of the airways and then stitched back together after the tumour had been removed. This is impossible with our usual method of minimally invasive lung surgery as it is too difficult, but with the Da Vinci robot to help us with the delicate stitching, we managed this and also managed to preserve the whole of her left lung,” Dunning explained in a release.

The mother of two is now currently recuperating nicely and is delighted by how well the procedure went.

Qbits for Cubists: Robots Made These Incredible Works of Fine Art

Watch: This Is the World’s Most Sophisticated Humanoid Robot