There's more to this story than meets the eye. 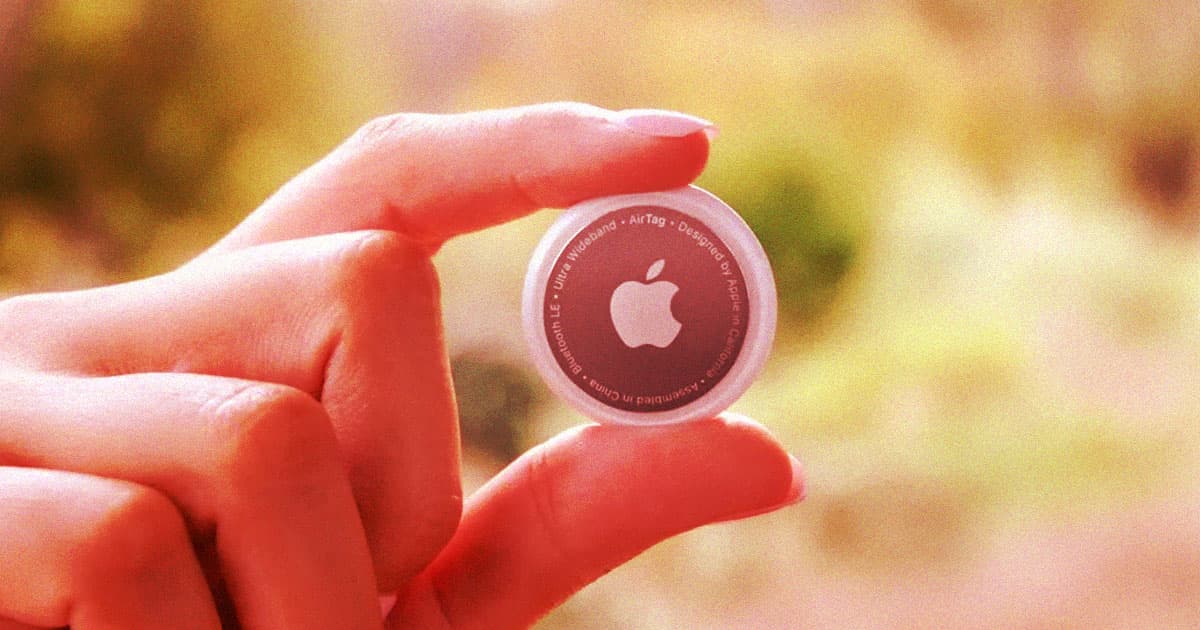 An Arkansas woman found herself in a consumer tech nightmare scenario recently when she discovered that someone had put an Apple tracking device on her car — a grim example of how high tech gadgets are often coopted for surveillance and harassment.

As Jonesboro, Arkansas' KAIT News reported, the unidentified woman was shocked when she turned on her iPhone in her car on the way to work and got a notification informing her that there was an AirTag, Apple's new consumer tracking device, somewhere nearby.

"It popped up I have an AirTag following and I’m like, no,” she told the station.

The woman told KAIT that she began looking around for the device and "jumped" when she saw it taped to the trunk of her car. She immediately bagged it and took it to her local police department, but as of yet, no updates on her case have been released to the public.

In her interview with local news, the woman said she doesn't know when the device was put on her vehicle, but thinks it may have happened when she was shopping for a Christmas tree. She also told KAIT that she "won't be shopping alone anytime soon."

Since its April release, reports have been cropping up about the ease with which bad actors could use the inexpensive device to track people.

In a viral TikTok video posted in mid-September, a woman reacts to finding the small Apple device behind her license plate holder and shows how it tracked her movements via an app on her phone.

"I'm literally fucking shaking," the woman in the video is heard saying.

Based on the #humantrafficking hashtag in the September TikTok video, it seems as if this very real danger may, in part, be used to further a widespread sex trafficking hoax on the social network, the crux of which lies in the enduring stranger danger myth that led to the "Satanic Panic" in the 1980s.

In the viral claims, TikTok users tell a story that's been replicated in many forms for years: that they (or more often, someone they know) were approached in big box stores like Target or Wal-Mart by usually-female strangers asking them if they want to make some extra cash.

In this particular set of stories, the subjects are often given a business card with a man's name on it, but when they Google the name, they find almost no information. From there, the users do some more "research" and upon discovering similar stories from other women and girls online, they conclude that they'd had a brush with human traffickers.

Like most hoaxes surrounding public anxieties, the debunked Target human trafficking story has the same mix of real-life threats and word-of-mouth memetic power as urban legends popularized by films like "Candyman." Conspiracy theories draw their strength from the kernels of truth at their cores, and really, who's to say that sex traffickers never picked up a victim in a Target?

In the mind of a woman who just learned that she was being tracked, it's not hard to imagine the stretch that takes you from that knowledge to trafficking scares.

While most of us non-predators can only imagine the reasons for secretly placing tracking devices on someone's car, the very existence of these $29 AirTags and the countless others like them are undoubtedly going to make people feel unsafe — and are a fertile breeding ground for conspiracy theories and anti-sex work bias alike.

Read This Next
From the Dept. of Things to Buy
Belkin 3-in-1 MagSafe Charger Review: A High-Tech Treehouse For Your MagSafe Apple Gear
From the Dept. of Things to Buy
Review: Apple’s $249 AirPods Pro 2 Are Actually Worth the Upgrade
From the Dept. of Things to Buy
Save 28% on AirPods Pro and More Labor Day Deals on Apple Gear
From the Dept. of Things to Buy
Apple Doesn’t Have Sales, But You Can Save $50 on an iPad Right Now During Labor Day Deals
FROM THE DEPT. OF THINGS TO BUY
Apple Watch Series 7 Prime Day 2022 Deal
More on Robots & Machines
From the Dept. of...
Thursday on futurism
The Best Mini Fridges of 2023
Blow Up Doll
Monday on the byte
Ukraine Accuses Russia of Using Inflatable "Dummy Tanks," Which Deflated
FROM THE DEPT. OF...
Monday on futurism
The Best Compost Toilets of 2023
READ MORE STORIES ABOUT / Robots & Machines
Keep up.
Subscribe to our daily newsletter to keep in touch with the subjects shaping our future.
+Social+Newsletter
TopicsAbout UsContact Us
Copyright ©, Camden Media Inc All Rights Reserved. See our User Agreement, Privacy Policy and Data Use Policy. The material on this site may not be reproduced, distributed, transmitted, cached or otherwise used, except with prior written permission of Futurism. Articles may contain affiliate links which enable us to share in the revenue of any purchases made.
Fonts by Typekit and Monotype.