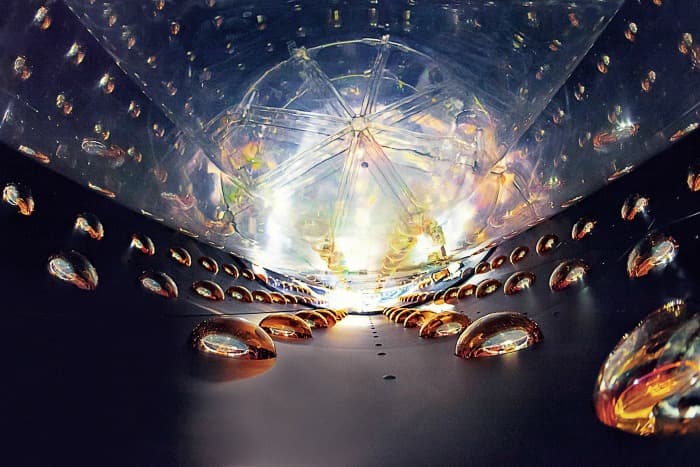 A neutrino is a subatomic particle that was first theorized by Wolfgang Pauli in 1931 as a solution to energy not being conserved through his calculations on radioactive decay. This is why they show up in, most notably, beta radiation. Neutrinos have no net electric charge, thereby excluding them from interacting with electromagnetic forces, and they are only affected by the weak subatomic force, allowing them to pass through matter uninhibited.

Our universe is filled with these particles, which react so rarely with matter that trillions pass right through us every second.

The current theory states that there are three different flavours of neutrinos: electron, muon, and tau neutrinos.

Physicists at The Daya Bay Collaboration,  around 70 kilometers northeast of Hong Kong Airport, stream neutrinos from Daya Bay and Ling Ao nuclear power plants to test the theory that there might be a fourth flavor of neutrino.

This fourth flavor of neutrino is known as a "sterile neutrino" because it does not interact through any fundamental force. They are very similar to regular neutrinos in the sense that they are both massive with spin (1/2). However, sterile neutrinos can have any mass, and it is believed that the very heavy species of these neutrinos, known as neutral heavy leptons, may be responsible for dark matter! The ambiguous name “dark matter,” reflects our inability to  figure out what this matter is. We can’t see it, so we can’t identify it; however, we do have a few ideas about what this form of matter could be made of.  One of these hypothetical particles is the sterile neutrinos, which are described as interacting noticeably with the strong and weak force and having meager mass (considerably less than an electron).

What makes them even more interesting is that, since  have no charge of any kind, there would be their own antiparticle. The fact that these neutrinos have mass allows them to participate in neutrino oscillation, and it is due to these reasons that The Daya Collaboration strives to research further into their elusive existence.

Unfortunately, The new results that were recently published in the journal Physical Review Letters,show no evidence for sterile neutrinos in a previously unexplored mass range. These new results remarkably narrowed down the unexplored area. However, this does not mean that the neutrinos don't exist. Rather, it means that we have a clearer idea of where they may be hiding.

By Edis Tireli. Edis is a Physics student specializing in both Physics to Astronomy.