A Wide-field View of The Centaurus A Galaxy: 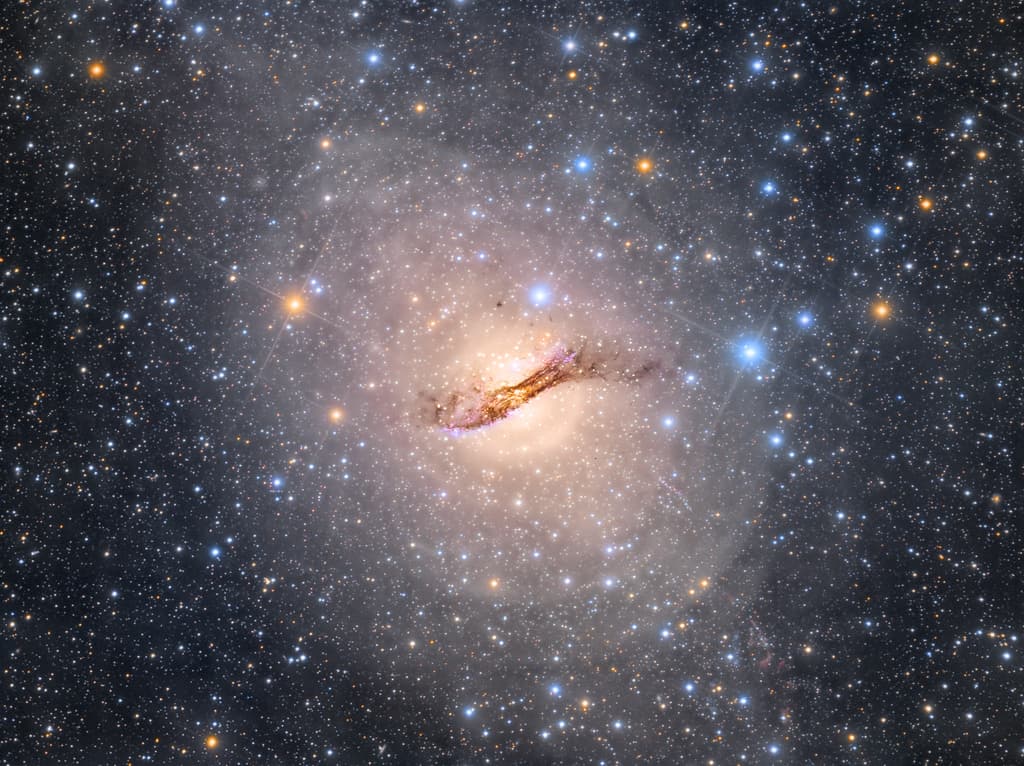 What you are looking at is the result of more than 120 HOURS of total exposure time. This long exposure ensures that the subtle features of the galaxy are seen in all of their glory (and let me tell you, the larger version is even more spectacular than the one seen here):

The galaxy in question is Centaurus A  (also known as NGC 5128), which is located about 12 million light-years from Earth (in the southern constellation of Centaurus). Centaurus A (or 'Cen A' for short) is a lenticular radio galaxy that is one of the brightest galaxies in our local group.

Cen A is also home to a black hole at its galactic center. This black hole is actively feeding on stellar material, which is  responsible for the jets of light and radiation seen emitted from the black hole's poles (the black hole itself is obscured by the thick interstellar clouds of dust. I still recommend that all of you take a peep at the nucleus of the galaxy. It is too wonderful to not look at)

It's hard to make all of them out, but this image (a wide-field view) contains more than 800 globular clusters, with only a mere 80 of them known prior to 2004 (833 new candidates were revealed in 2011). For the sake of comparison, our galaxy is about 100,000 light-years in diameter and has has an estimated 150 globular clusters. Centaurus A , on the other hand, spans over 60,000 light-years and we haven't been able to pinpoint the exact number of globular clusters. Furthermore, Rolf Olsen (the photographer) identified and marked 709 of these clusters himself.

Generally, after a certain point in time, larger elliptical and spiral galaxies experience a gradual decline in star formation, which indicates that Centaurus A merged with another galaxy in the recent past. In doing so, stellar materials from both galaxies would merge and collapse under the weight of their own gravity, forming new stars.

Perhaps you noticed that I explicitly named the person that took this image. And it wasn't anyone associated with the Hubble Space Telescope, the ESO or the ESA. Rather, it was taken by Rolf Olsen (an astrophotographer) from the comfort of his own back yard.

Even more incredible is the fact that he BUILT the 10 inch telescope used to take the image himself. In order to capture the essence of the galaxy, Olsen spent more than 120 hours collecting starlight for his image and another 2 full days (about 40 hours) to compile the data used to piece all facets of the galaxy together.

All in all, his image is just as good (perhaps even better) as any produced by much more expensive and sophisticated technology.