Why Solar Storms Cause Radio Blackouts 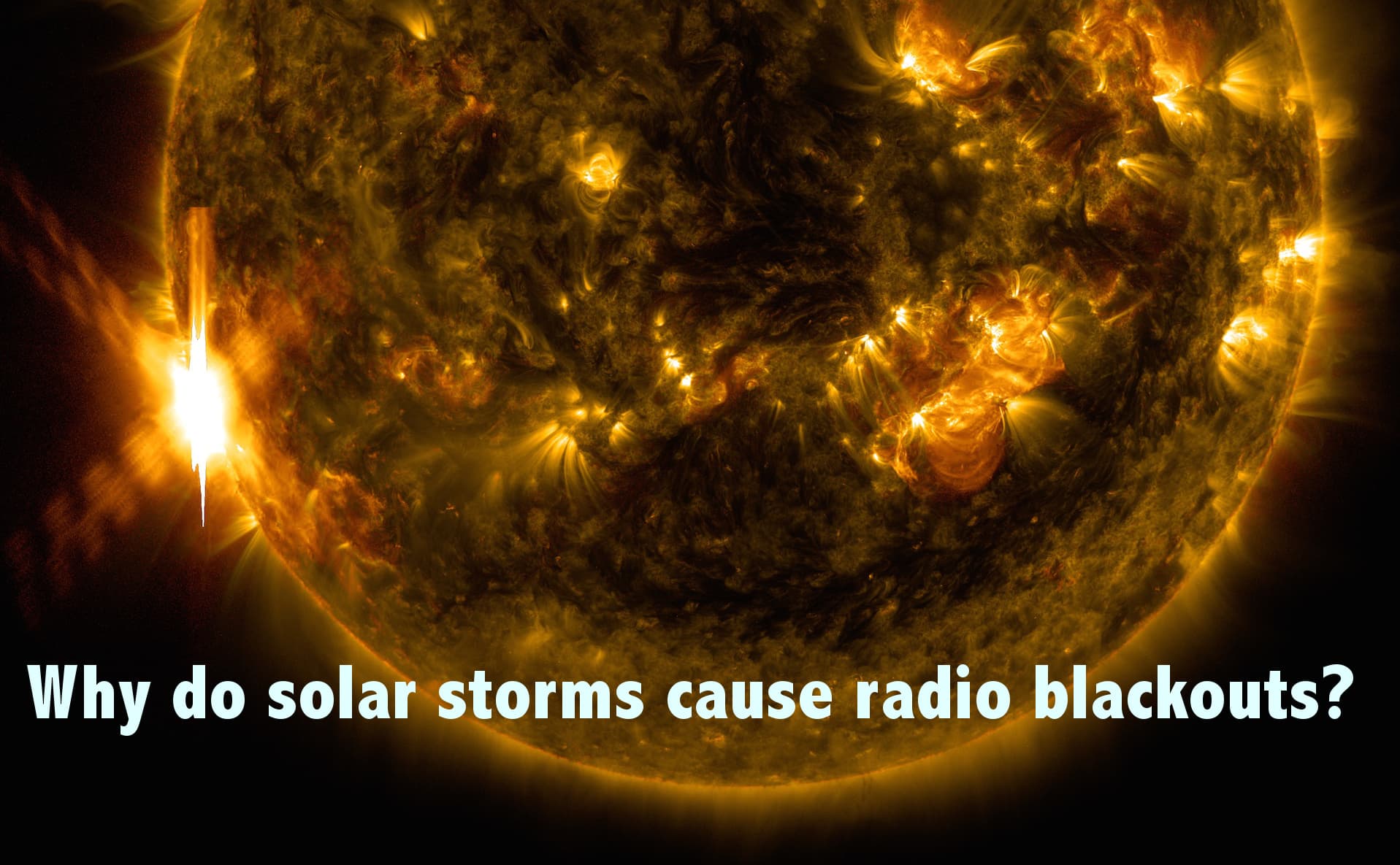 The Sun released three major flares in quick succession last Tuesday and Wednesday (June 10 & 11, 2014). Each registered at the low end of X-class, the highest possible flare classification. Many science and news outlets have reported on the strong radio blackouts associated with these events, but few (none that I saw) explain what that actually means and why it happens. So how is it that an eruption 100 million miles away can interfere with radio communications on Earth?

First, there are two main types of radio transmissions: low frequency and high frequency. Both can be affected by solar storms, but it takes a flare 10-20 times more powerful than these ones to really impact low frequency signals. Such events are exceptionally rare, occurring just a few times per 11-year solar cycle. High Frequency (HF) radio communications are much more easily interrupted by solar activity, and the radio blackouts reported last week refer to these signals. Events this powerful, classified as R3 on NOAA’s Scale for Radio Blackouts, occur about 175 times per solar cycle. So while not common, these events aren’t entirely rare either.

“High Frequency” officially refers to radio waves between 3 and 30 mega Hertz (1 MHz = 1 million cycles per second). These waves can be reflected by the ionosphere, the layer of Earth’s atmosphere between 85 and 600 km in altitude. Radio signals can thus be “skipped” along the atmosphere like stones on a pond. This has historically been one of our primary modes on intercontinental communication and is widely used today for aviation, government time stations, weather stations, and amateur radio, among other things.

Solar storms interrupt these communications by altering the properties of the ionosphere, which happens in two basic ways. The first, which caused the radio blackouts last week, is simply due to the high-energy radiation from the flare. X-rays bombard Earth, knocking electrons off atoms in the ionosphere. This creates an abnormally high density of free electrons in the lower ionosphere and is referred to as a Sudden Ionospheric Disturbance. High frequency radio waves are absorbed by this increased density, which blocks the "skipping" property and results in a complete blackout of HF communications for minutes to hours.

Solar storms can also impact radio communications through the plasma that’s blown out into interplanetary space. Solar particles, specifically protons, are accelerated to a significant fraction of light speed and reach Earth within less than an hour. Most are deflected by Earth's magnetic field, but some enter the atmosphere at the poles where they collide with and ionize air particles. As with the X-rays, this increases the density of the ionosphere at low heights, causing absorption of HF radio communications. These “Polar Cap Absorption” events can last for days and are particularly disruptive to airlines that commonly fly near the poles to reduce travel times. Finally, lesser degrees of HF radio interference are experienced for similar reasons during aurora-producing geomagnetic storms caused by Coronal Mass Ejections, which are massive releases of slower plasma that generally takes 2-3 days to reach Earth (one from last week is shown below). These effects were not experienced last week because the eruptions happened on the Sun’s edge, facing away from Earth.