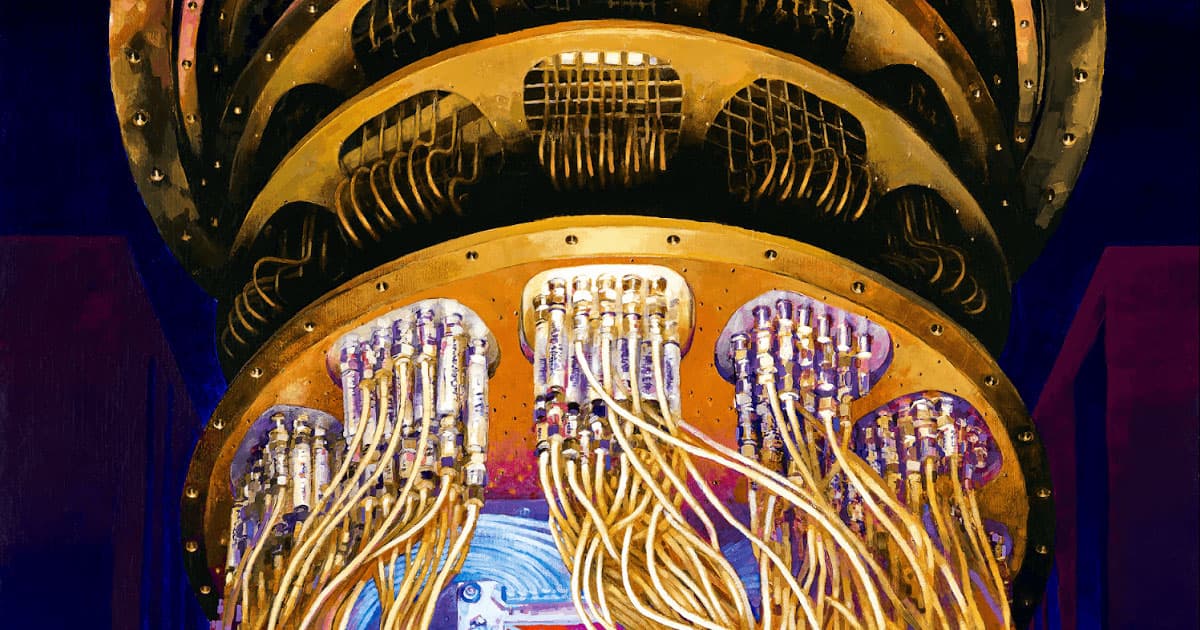 After weeks of speculation, megacorporation Google is claiming to have achieved "quantum supremacy" in a paper published in the prestigious journal Nature.

Why should you care? And what is quantum supremacy in the first place? Let's take a couple steps back.

In the paper published today, the team of Google AI scientists claimed their quantum computer — called "Sycamore" — was capable of completing a task involving the verification of the randomness of large numbers in just three minutes and twenty seconds. The most powerful supercomputer in the world, they said, would need 10,000 years to accomplish the same task.

Classical computers — any piece of equipment from your laptop to warehouse-sized supercomputers — work with just ones and zeros. But quantum computers, like Sycamore, use quantum bits, commonly known as qubits, to do their calculations instead. Rather than being stuck with two possibilities for a single bit, a qubit can be both zero and one at the same time.

That means the power of computation rises exponentially the more qubits you have. With 52 qubits, Google's Sycamore quantum computer can look at 10 million billion states at every one time, according to a flashy video uploaded by Google today on the subject. That's a hell of a lot of math.

So what makes Sycamore more effective than a classical computer?

American theoretical physicist John Preskill first coined the term "quantum supremacy" back in 2012. In a column for Quanta Magazine published earlier this month, he defined it as "the point where quantum computers can do things that classical computers can’t, regardless of whether those tasks are useful."

It's important to note that quantum supremacy doesn't mean a quantum computer can solve a task that's impossible for a classical computer.

Noting that the term "quantum supremacy" would likely result in "overhyped reporting on the status of quantum technology," Preskill congratulated Google on their "remarkable achievement in experimental physics" calling it a "testament to the brisk pace of progress in quantum computing hardware."

In short, by proving the quantum computer's superiority, we are now capable of solving certain complex problems much faster than before. Pharmaceutical companies could conceivably use the tech to devise extremely complex compounds that could be used in medicine. Financial modeling could use quantum computing to figure out market trends.

And on a darker note, quantum computers could theoretically crack current encryption standards with unprecedented amounts of computational power.

But that's all speculative. Leading researchers still haven't found the exact use cases for these powerful and notoriously finicky computers.

"In brief, the quantum computer executed a randomly chosen sequence of instructions, and then all the qubits were measured to produce an output bit string," wrote Preskill in his column. "This quantum computation has very little structure, which makes it harder for the classical computer to keep up, but also means that the answer is not very informative."

Google's biggest rival in the quantum space, IBM, published a piece two days prior to the publication that criticized the accomplishment.

It claimed that an "ideal simulation of the same task can be performed on a classical system in 2.5 days and with far greater fidelity."

That's in large part due to certain parameters Google's experiment was ignoring, according to IBM, including "plentiful disk storage," and other "well-known optimization methods."

Supremacy or not, the power of quantum computers is arguably only as significant as its possible use cases. Google's team is already working on "near-term applications," according to a blog post published today, including "quantum physics simulation and quantum chemistry, as well as new applications in generative machine learning."

Besides these applications, Google has proved its quantum computer is really good at spitting out random numbers. That may not sound like much, but randomness can be extremely useful in computer science.

Preskill believes we are still decades away from seeing quantum computers have a "transformative effect on society." But Google's watershed moment could lay the groundwork of an entirely new era of computation that could enable anything from the design of new materials to more efficient fertilizers — if Google is to be believed.

Read This Next
Quacks Like a Duck
Those Headlines About Scientists Building a Wormhole Are Total Nonsense, People
Confirmation Bias
Microsoft Retracts Paper Claiming Quantum Computing Breakthrough
Beam Me Up Qubit
Researchers Achieve First "Sustained" Long Distance Quantum Teleportation
Totally Incoherent
Scientists Create Quantum System That Stays Operational 10,000 Longer
Thermostats? More Like Burnostats.
Honeywell: We Are Beating Everyone’s Ass at Quantum Supremacy
More on Hard Science
Reel Big Dish
Yesterday on the byte
Brilliant Scientists Decide to Name the World's Largest Telescope "SKA"
Horrible Geese
Dec 4 on futurism
Furious Geese Are Defeating Humans, Scientists Find
It From Bit
Nov 22 on the byte
A Scientist Is Crowdfunding an Experiment to Check if We Live in a Simulation
READ MORE STORIES ABOUT / Hard Science
Keep up.
Subscribe to our daily newsletter to keep in touch with the subjects shaping our future.
+Social+Newsletter
TopicsAbout UsContact Us
Copyright ©, Camden Media Inc All Rights Reserved. See our User Agreement, Privacy Policy and Data Use Policy. The material on this site may not be reproduced, distributed, transmitted, cached or otherwise used, except with prior written permission of Futurism. Articles may contain affiliate links which enable us to share in the revenue of any purchases made.
Fonts by Typekit and Monotype.