Why Don't Moons Have Their Own Satellites? 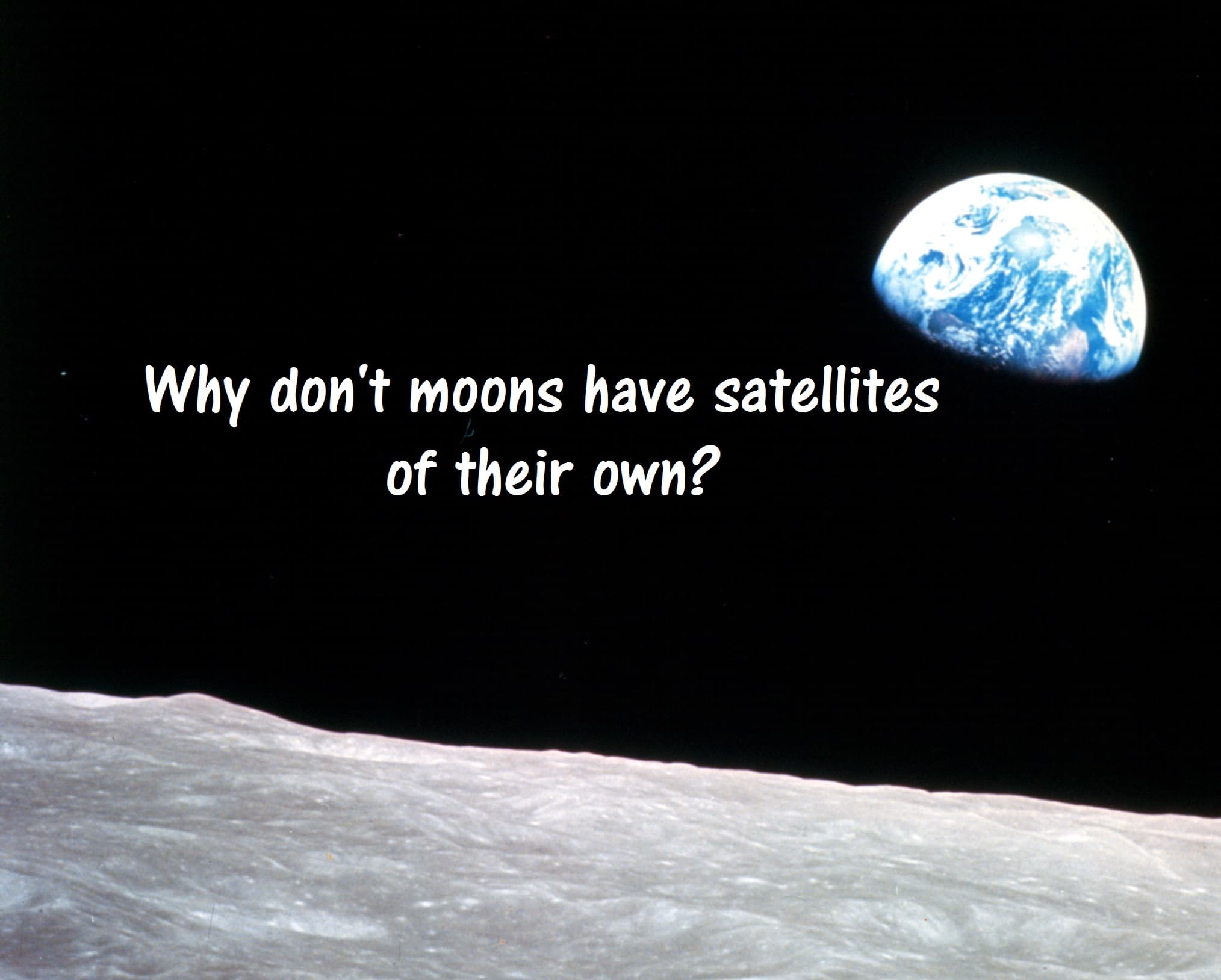 Have you ever wondered why moons don't have other moon's in orbit around them? The question is rather common, but the answer is rather complex—especially when you initially attempt to visualize the mechanics of such a system.

Technically speaking, everything is in orbit around something else. The Earth, Sun, and all the planets orbit around the center of mass of the solar system. More generally, Earth orbits the Sun; the Moon orbits the Earth; our entire solar system orbits around Sagittarius A* (the supermassive black hole in the center of our galaxy), and our galaxy completes one full rotation every 230 million years (interesting aside, Sagittarius A* might have 10,000 additional black holes in orbit around it).

In theory, it's possible that our Moon once had a satellite of its own; however, for such a body to remain in orbit, it would need to have to very specific characteristics for its size, mass, speed, and orbital distance. It would be difficult for an orbiting body to fit these exact parameters, but it is possible. As such, it is appropriate to ask why moons don't  have moons of their own. After all, we’ve observed large asteroids with satellites. Why then don't moons have satellites of their own?

The laws of gravitation and circular motion (orbiting), which were put forth by Sir Issac Newton, have been known to the world of science for centuries. We can describe, predict and explain the orbits of planets and moons using 3 fundamental equations:

The Moon has about 1/100 the mass of the Earth, so using this as a rough ratio (and using the ratios for average orbital distance and speed of the Moon), the gravitational field strength of the Moon is just about sufficient to hold something in orbit around it at around  50,000 km/h (31,000 mph).

But we have lots of problems with this hypothetical scenario. The first problem deals with the formation of this hypothetical satellite. The gas giants are much larger than the inner rocky planets; Jupiter weighs in at 300 Earth masses, and Saturn is 100 Earth masses. They were able to catch spherical proto-planets (or form moons around them) early on in their history because they are so massive. The Earth-Moon system is exceptionally unusual when you look at the physics and compare it to its neighbors. Mars (a tenth of the mass of Earth) would never have been large enough to form a big moon, and so Mars' natural satellites, Phobos and Deimos, are thought to simply be captured asteroids.

In short, the Moon is much larger relative to its own planet than any other in the solar system. This is all thanks to its rare formation, which kick-started billions of years ago. For those that aren’t familiar with it, the current theory is that, very early in Earth’s history, we crashed into a Mars-sized planet in our own orbital region. The energy from the collision would have shattered and melted the crust, throwing huge volumes of matter into a halo around the planet. The matter then coalesced to  form the Moon, and this explains why rock types are very similar to that here on Earth.

This sort of event is very rare indeed, which is no other small rocky planet in our system could ever host such a large satellite. But many of the gas giants have large satellites, some of which are large enough to have their own satellites. So why do they not host satellites of their own? As we proved, it is mathematically possible, so what other factor is stopping them from forming? We don’t even see moons with captured asteroids. The answer lies with the tidal forces between the moon and the host planet.

The moon is in a synchronous orbit about the Earth—its rotation period about its own axis is the same as its orbital period about the Earth, meaning it shows the same face to Earth at all times. The effect of having the same side of the Moon facing us at all times is what causes the daily tidal changes in the ocean. But it also has more profound effects on the Moon; it creates a bulge of 20 m (66 ft) and the gravity field isn’t uniform, meaning its center of mass isn’t in the center. This isn’t unique to Earth, it can actually be seen in the majority of moon systems – but proves devastating to anything caught in between!

Let’s look at our Moon. An asteroid could be captured in orbit around it, but the tidal forces would slowly wear away at the asteroid's orbit, contorting it so much so that the body of rock would eventually crash into the Moon, get flung out of orbit, or be torn apart by its gravitational field. In certain periods of the Moon’s history (or any moon of good size), it could have temporarily held a captured asteroid in a stable orbit. But tidal forces would have cut its life as a planet-moon and sub-satellite system short—though it could still have lasted tens of thousands of years.

Our own spacecraft sent to the Moon were also affected by this, but they remained there for only a few years at a time, and we could compensate for any changes in orbit using thrusters.