What's in a Handful of Dirt? 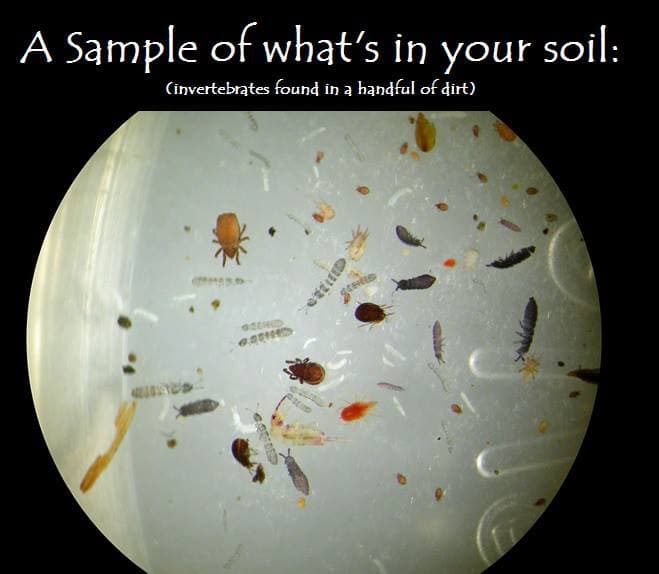 As children, we were all (hopefully) taught not to eat dirt. And I, for one, am extremely glad that I don't recall rebelling and breaking this particular rule. Of course, if I did rebel and eat some of the Earth, I would have been eating a lot more than just Earth. In fact, many people think of soil as nothing more than the substrate in which plants grow and the ground on which humans build- but it’s much more than that.

If you thought soil was dirty before, just wait…

What is soil? The United States department of Agriculture (USDA) defines soil as “a natural body comprised of solids (minerals and organic matter), gasses, and liquids that form the earth’s surface.” Although soil can differ greatly with climate and topography, for our purposes let us generalize about the soil found in the indigenous forests of North America. This soil is primarily comprised of sand, silt, clay, and organic material such as decaying plants, animals, and other organisms.

If you walked outside and dug up a handful of soil from the forest floor, you would immediately see a few things. First, you might get some of the top leaf litter from the floor above. You might notice some fauna that can be seen by the naked eye- like a beetle or earthworm, maybe even a root or two. But with a microscope, there is so much more to be seen.

Under magnification, you would discover anywhere from 3 million to 50 billion bacteria up to 1.0 micron in size- in just one handful of dirt! These bacteria live in the liquid parts of the soil and are aerobic, meaning that they require air to live. These organisms are essential to soil as they convert nitrogen into ammonium (among various other chemical tasks), which is usable to plants in producing proteins.

Next, you might find 500,000-100 million individual fungal cells connected together by filaments called hyphae. Fungus is the most important decomposer in soil, breaking down resistant compounds like lignin for other organisms. Fungi help hold the particles of soil together, and can often have symbiotic relationships with plants increasing nutrient uptake.

Nematodes are the most abundant animals in soil. These worm shaped (although not related to true worms) organisms feast on bacteria, fungi, and other Nematodes; they also help to control bug populations by gorging on the smaller species of insects.

Next comes the Arthropods. Arthropods are organisms with a defined exoskeleton, jointed legs, and bilateral symmetry (meaning they’re symmetrical if you draw a line down the middle). They are known to most humans as 'bugs'. There can be anywhere from 100 to 1,000 of these little ‘buggers’ living in a handful of soil at a time. There are at least 48,000 species of mites in the world, most of which can only barely be seen by the human eye, many of which live in dirt. Other Arthropods like Centipedes, not only live in the soil and leaf litter, but also lay their eggs in dirt- covering them in sticky secretions, waiting for them to hatch in that handful of dirt YOU scooped up. Arthropods are responsible for transforming more complex nutrients in the soil to more usable forms for smaller organisms, as well as aerating the soil and spreading helpful microbes throughout the subterranean world.

Most of us steer away from actually consuming soil, but if you’re looking for solid evidence that it’s grossly teeming with life, you can experiment for yourself. Find a medium size glass jar (one gallon works well), go out into any wooded area and fill one third of the jar with dirt from a shaded area. Trickle about six tablespoons of water from a pond or stream into the jar and seal it. Within weeks you’ll have a mini ecosystem of plants and animals that you never knew were lurking within your soil.