What You Need to Know about Sarin, One of the World’s Deadliest Nerve Agents 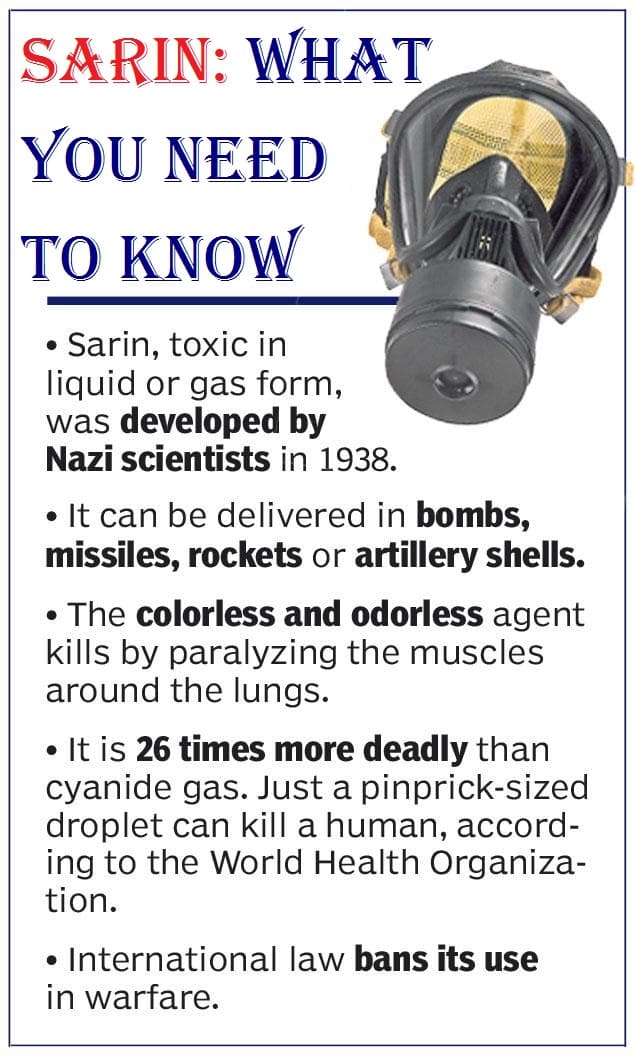 At this point, many of you have probably heard about the sarin nerve agent. This topic has been popular more recently, given the atrocities taking place in Syria. However, we are not here to talk about politics or to discuss who did what to whom. Rather, we’d like to discuss the science behind this weapon. How does it work? What does it do? And more importantly, why do we need to know about it? The answer to that last question is fairly simple; we must understand the effects that these nerve agents have in order to make informed decisions about relevant social and political issues—about what weapons should be utilized, what should generally not be used, and what should never even be considered.

When sarin was first produced back in 1938 by the Germans, it was meant to be used as a pesticide. That’s right, we were going to put a chemical that can kill a person in under a minute on our produce—maybe not the best life choice. Yet by mid-1939, Germany was producing sarin as a weapon of war, and by the 1950s, both the United States and the USSR had started to produce sarin as well. Today, however, sarin is almost universally banned. In 1993, over 162 countries signed the United Nations Chemical Weapons Convention, which banned the production, usage, and stockpiling of sarin and other chemical weapons.

Nerve agents are so deadly and cruel because they incapacitate their victim before he or she dies. When our bodies are functioning normally, acetylcholine (a neurotransmitter) carries signals across the gap between synapses, allowing us to contract certain muscles (such as those surrounding the lung or in the leg muscle). This ultimately allow us to move, to breathe, and to function. In a similar way, when we want to relax a certain muscle, an enzyme called acetylcholinesterase removes the acetylcholine from the site, allowing the contracted muscle to relax. When sarin is introduced into the body, it reacts with the acetylcholinesterase molecule and prevents it from removing acetylcholine from the site of the synaptic gap. In short, contracted muscles are unable to relax. Imagine dying because you cannot exhale… it’s not very pleasant.

What’s more, sarin easily penetrates the human body, and it is easily transferable. The vapor can penetrate human skin, and a person’s clothing can release sarin for about 30 minutes after coming into contact with sarin gas. The lethal dose of sarin is low, possibly as low as .01 mg/kg body weight—just .73 milligrams for a person who weighs 73 kg (160 lbs). People who absorb a non-lethal dose may suffer permanent neurological damage, and a lethal dose takes only a minute to cause death. There are many symptoms of exposure to sarin, ranging from a first sign of a cough or a runny nose to agonizingly painful and deadly symptoms. Soon after exposure, the victim has difficulty breathing and experiences nausea. As the process continues, victims lose control of bodily functions. The victim vomits, then he defecates and urinates, then he starts twitching and jerking. Ultimately, the victim becomes comatose and suffocates in a series of convulsive spasms.

Nerve agents are the most toxic and rapidly acting of the known chemical warfare agents, and sarin is the most volatile of the nerve agents. This means it can easily and quickly evaporate from a liquid into a vapor and spread into the environment. It is silent, it is fast, and its effects are irreversible… it is horrifyingly deadly. Winds can blow it across vast areas of land to impact unintended areas; it can cling to food and poison agriculture. It is not to be taken lightly.