What Would Happen if You Jumped Through the Center of the Earth? 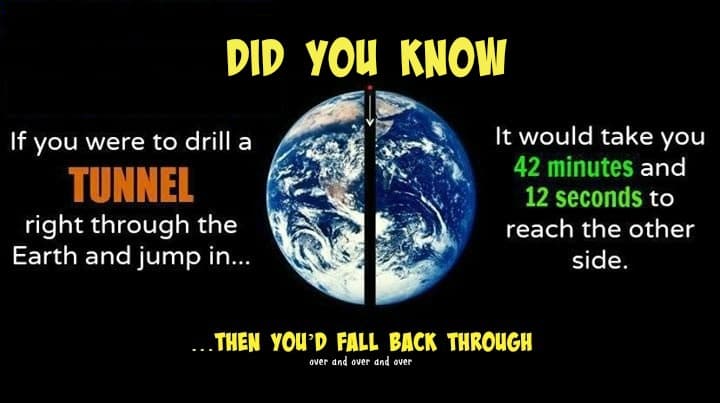 Part of the fun of theoretical physics (and, if you ask me, the best part of theoretical physics) is that you get to ask absurd questions and calculate the (often equally absurd) answers. Take, for example, looking at what would happen if you were to drill a hole through the center of the Earth and jump through it.

Who would want to do such a thing?

Obviously, probably no one. It would bankrupt you a million times over, and it would kill you in a plethora of awful ways. But. Let's say that some brave soul undertook the task, just for the sake of science. What would, theoretically, happen?

First, let us state the obvious: You can't drill a hole through the center of the Earth. Saying that we lack the technological capabilities to accomplish this momentous feat is a grand, grand understatement. But of course, we can drill holes in the Earth. And how deep can we get?

To date, the deepest hole is the Kola Superdeep Borehole. Drilling started in the 1970s and finished some 20 years later when the team reached 40,230 feet (12,262 meters). That is about 7.5 miles, or just over 12 km. That's not even a hair's breadth when compared to the diameter of the Earth. So why did we stop? Well, things start to heat up as you get closer to the center of the Earth. This is because Earth's core is liquid metal and reaches temperatures exceeding 9700°F (5400°C). And at just 7.5 miles, the team was already seeing temperatures exceeding 350°F (about 170°C).

Not that I need to say it, but these temperatures would leave you very much dead.

But if you did somehow manage to go even deeper, you would hit magma about 30 miles beneath the surface of the planet (48 km). At which point, you would be incinerated. Not so fun times.

And even supposing that you managed to overcome this obstacle, if you developed some kind of tube that allowed you to safely pass through the searing hot magma, the very air would kill you. Or rather, the air pressure would.

So unless your goal is to explode, I'd recommend avoiding these depths.

But even if you managed to make a tube that allowed you to pass through the magma, sucked all the air out of the tube, and wore a spacesuit so that you could breath, there would still be problems. Namely, the rotation of the planet. In short, about halfway to the center of the Earth you would be moving sideways about 1,500 mph (2400 kmh) faster than the walls of your tube. This fact is obviously terribly bad for your long-term health. You would bounce and bang and careen off the sides of the tube and, well, die.

But putting all of these issue aside (and several others that I’ve failed to mention), if you could jump through the Earth, your momentum would keep you traveling through to the other side. And how many minuets would this take?

42. And that, as we all know, is the answer to life, the universe, and everything.

However, the fun doesn't stop there. Because of the extreme gravity of the Earth, and your extreme momentum, once you got to the other side, you would fall right through the Earth again. And you would do the same once you neared the other side. You would oscillate back and forth sinusoidally; you would be a human yo-yo.

If you want to get the math behind this, head to this fantastic article.

Watch: Falling Through the Earth