What If the Moon Were Suddenly Replaced By Mars? 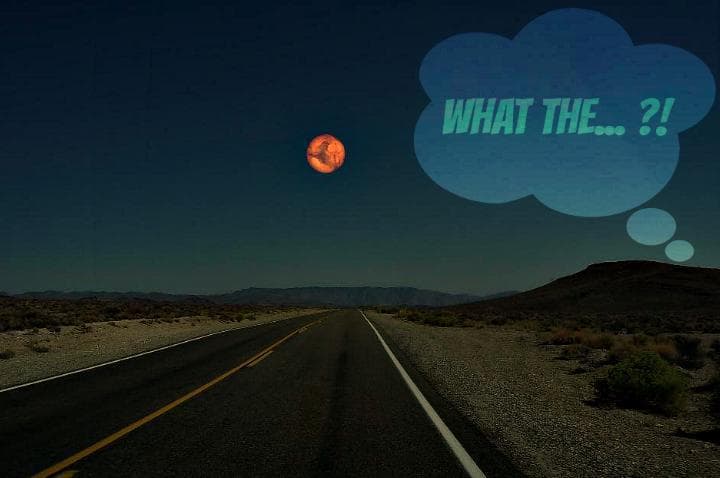 The immediate effects on Earth, if the moon were suddenly replaced by Mars, would be for the whole world to collectively go "WHAT THE... ?!" Once the chaos and confusion subside, would it have any actual effect on Earth? The short answer is "yes." As for the long answer....

Most importantly, the moon is one of the main influences over the tides, so replacing a small body with one that's twice its size certainly upset the delicate balance—most likely resulting in an influx of large waves, perhaps even tsunamis, crashing against the shoreline. So if you're on holiday at the seaside when this freak occurrence happens, it's best to leave.. immediately.

Similarly, one would expect to see Mars more clearly than the moon. As we know, planets and moon's generate no light on their own. Instead, they merely reflect sunlight that hits them directly. Therefore, if Luna was replaced with Mars, then it's likely that there would be more light visible at night. It would make it all the more eerie if it put a red tint on the night time landscape.

Now, Mars isn't so massive, it would be in danger of plunging into Earth fairly quickly, unlike Jupiter...that would be a different story. However it without question begin to tug at our orbit a little and we may even start orbiting each other, forming a double planet, or binary planet, system. Again this probably wouldn't pose any short-term problems, as there are many systems like this in our galaxy.

In fact, there may be one in our solar system. Many astronomers believe Pluto's largest moon, called Charon, shouldn't be considered a moon at all, but a smaller companion to the dwarf planet—making them a double planet system. Some even take it a step further, suggesting that our own planet and moon could be better described as one of these binary systems.

Of course, such a close association may lead to significant problems over the long run. In time, gravity could ultimately start to cause both worlds to spiral inward, ultimately causing them to collide. Conversely, there's no present danger of that happening, as the moon is actually receding from Earth at the same rate the average person's fingernails grow.

Finally, the "Giant Impact Hypothesis" tells us that the moon we are all familiar with was created following an impact with a Mars-sized planetary body. Based on this same information, if Earth and its new moon Mars were to collide, history would start repeating itself all over again...at least until the Sun becomes a red giant and consumes the inner solar system.

The plus side to having Mars as our companion would be its new-found accessibility. Imagine being able to make out Valles Marineris, or Olympus Mons (the tallest mountain in the Solar System), with your telescope. It would pretty much make the events of "The Martian" seem like just another Tuesday.

Here's an awesome video of what it would look like if other planets were our moon (you should watch it, no really).