What is the Value of Manned Space Exploration? 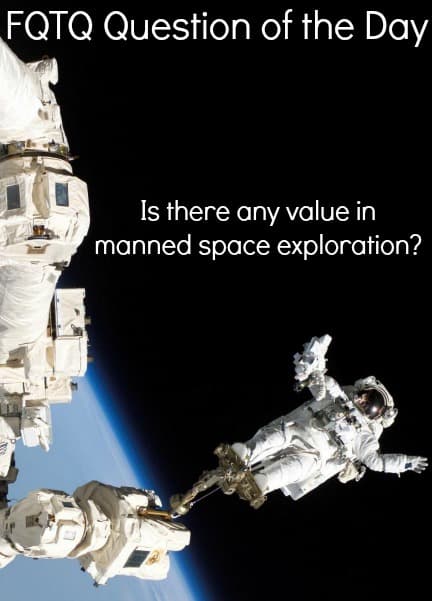 I trust everyone here realizes the value of general space exploration. Some of the oldest philosophical questions that have resided in our minds (such as: where do we come from; how did we get here; what is the meaning of life, the universe, and everything; are we alone?) can be answered by looking out into the cosmos. More practically, some of the most pressing threats to life as we know it exist beyond Earth’s orbit. Studying things like the runaway greenhouse effect on Venus and hunting for civilization destroying asteroids are paramount to our survival as a species. But, is there any value to human spaceflight?

1) The cost of manned spaceflight (in both risk and money) is MUCH higher than the cost of robotic spaceflight. Space agencies can put robots into orbit at a fraction of the cost putting a human in orbit. If a robotic spacecraft blows up during launch, gets destroyed in orbit, or fails in some other fashion, it’s an unfortunate setback – but that's all. If a human craft explodes, it’s a culturally devastating event (not to mention the emotional suffering of the deceased astronauts' friends and families). Fortunately, to date, planet Earth has lost few human lives to our space programs, but the risk is still there, and that number is bound to increase.

2) Robots are better at exploration. They aren’t as flimsy as humans, so they can exist in more extreme environments. In addition, robots can be mounted with the latest gadgetry, allowing them to analyze a much broader spectrum of scientific targets. A human can't analyze the composition of something, or see in a broad spectrum. So a human would be forced to carry a robot’s worth of equipment with them, making the human seem like a third wheel.

Proponents against human spaceflight ultimately argue that robots are better suited for space exploration, and that such endeavors should be left to the machines. Some go so far as to claim that manned spaceflight has produced absolutely nothing of scientific value. Nobel Laureate Steven Weinberg summarizes this position quite clearly with his statement, “The International Space Station is an orbital turkey. No important science has come out of it. I could almost say no science has come out of it. And I would go beyond that and say that the whole manned spaceflight program, which is so enormously expensive, has produced nothing of scientific value."

So, has the manned space program produced any important results? Is a continued manned program valuable in anyway?

From a ‘looking at the past’ perspective, we see a large variety of technologies that were developed to allow human space flight that have been adapted to life on Earth – the so-called ‘spinoff’ technologies. These include technologies like kidney dialysis, programmable pacemakers, and new and stronger building materials – specifically, in regards to plastics and some metals (of course, many technologies also come from robotic space flight). Nevertheless, developments in engineering and discoveries in science aren’t isolated events; what one person designs in one application may lay the groundwork for someone else to remake that technology into something else. Many materials and inventions can trace their roots back to NASA, but it’s still hard to measure their scientific impact.

Now, let's look at the political picture. Manned spaceflight has always had political motives. Back in the days of the space race, The U.S. and the Soviet Union were at war, not a war of bullets and bloodshed but a war of technology and science. Who could develop X technology first? In my opinion, that’s a brilliant war. If we *must* have war, let it be like this. It’s a war of wits, and it required very little loss of life (keeping in mind that both sides lost people when space vehicles malfunctioned). U.S. and Russian relations improved when their respective spacecrafts docked with each other in orbit in 1975, heralding an end to the ‘war’ and serving as a symbol that the two superpowers were moving ahead to a new era.

In the same spirit, joint space ventures have served as an internationally unifying event. Building the International Space Station was a tremendous undertaking and required the cooperation of several world nations – some of whom had been on uneasy terms for more than a century. The ISS is arguably one of the greatest feats of engineering humanity has constructed to date; it is definitely one of the wonders of the modern world. It has served as an icon of the modern era.

Those who argue that this type of inspiration comes at an exuberant cost overlook a few very important facts. Throughout all of human history, we have constantly built wonders and marvels proclaiming our greatness. Much of the time, the inspiration for these building was simply “just because I can;” however, the engineering and technological requirements of building such a structure came with many benefits. These icons were an inspiration to their respective peoples in exactly the same way feats of human space travel have been beneficial.

While we’re talking about icons, let’s not forget the sheer force of inspiration that has come out of the manned space program. Look at all of the people today who name Neil Armstrong and Buzz Alden as their inspiration for getting into science or engineering? The 60s was a magical time where science was incredible, and it inspired a generation of people to think bigger. In modern times, I think Commander Chris Hadfield is the perfect example to demonstrate the value of the manned space program. Hadfield was the first Canadian to command the ISS; he did very simple things like play music in space and wring out a washcloth on the station for school audiences everywhere to watch. He used these opportunities to teach scientific ideas and concepts, but more importantly, he invigorated an entire nation. Weekly question and answer teleconferences with schools, and a never-ending stream of pictures showing his views of Earth, made science cool again.

That type of inspiration cannot be measured. Because of Commander Hadfield, we have an entire generation of people who are interested in science, technology, engineering, and mathematics. Because of Neil Armstrong and the Apollo missions, the entire world was looking to the future and excited about scientific endeavors.

As Neil deGrasse Tyson argues, the manned space program creates heroes. This invigorating force elevates and energizes the minds of the general population. It’s no different than the man who stands in front of a column of tanks who inspires humanists. It’s no different than the woman who becomes a symbol of freedom by going to school. It’s no different than the zoologist who reveals the splendor and the value of the animal kingdom or the climatologist who shows the delicateness of the environment – both of which can create a generation that is sensitive to the importance and fragility of our planet. Seeing people explore, touching that innate desire embedded in all of us, it is uplifting. It elevates a generation, a culture, and the entire human species.

You had better believe it.