What is the Shape of Space? 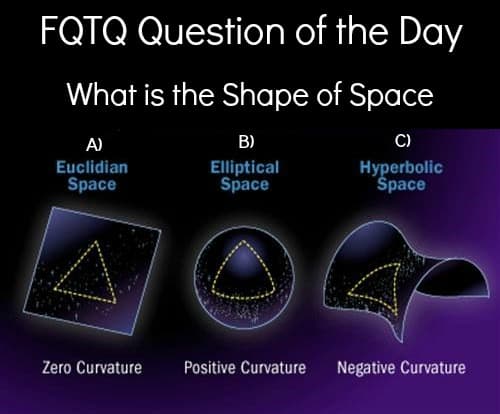 Question: Has it been ruled out conclusively that space "wraps around." i.e. that light from distant objects can reach an observer from opposite directions?

If I understand your question correctly, you’re asking if there is any large scale curvature to spacetime (or, rather, if such a concept has been conclusively ruled out in favor of a flat spacetime).

For the benefit of the fans who don’t understand the question, I’m going to take a moment to elaborate on what is meant by "large-scale curvature." For most of human history (contrary to popularized belief), humans assumed that the Earth was spherical in nature. If I pick any direction and walk/swim in a perfect straight line, I will eventually arrive at my point of origin. Why? Because the Earth has a large scale curvature that is measurable. So, if I hop onto my spaceship and fly off in a straight line, will I eventually arrive back at my point of origin?

Not as far as we can determine.

A flat universe is a central tenet of inflation theory, thus, it is very important to our understanding of the big bang theory. Knowing whether the universe is spherical, curved, or flat could make or break these theories. Several experiments have been conducted in recent years to determine if there is any large-scale curvature present in the universe. Observations made by the ground based MAT and DASI telescopes, aided by the BOOMERANG and MAXIMA balloon missions, showed the universe to be flat within a 15% margin of error. In other words, scientists were 85% certain their results were correct.

Although this is a huge win for inflation, we are still not *absolutely* certain the theory is accurate. The geometry of the universe appears to be infinite, so we can only observe a finite portion of it. If future observations detect any curvature, no matter how small, then it would provide some level of evidence against inflation. However, assuming that the foundation on which modern science is built is correct (or at least pretty damn close), then I would answer your question affirmatively. For all intents and purposes, any large scale curvature of the universe appears to have been conclusively disproved – but that won’t stop us from running test after test to make sure that this is truly the way things are.