What is a Billion? 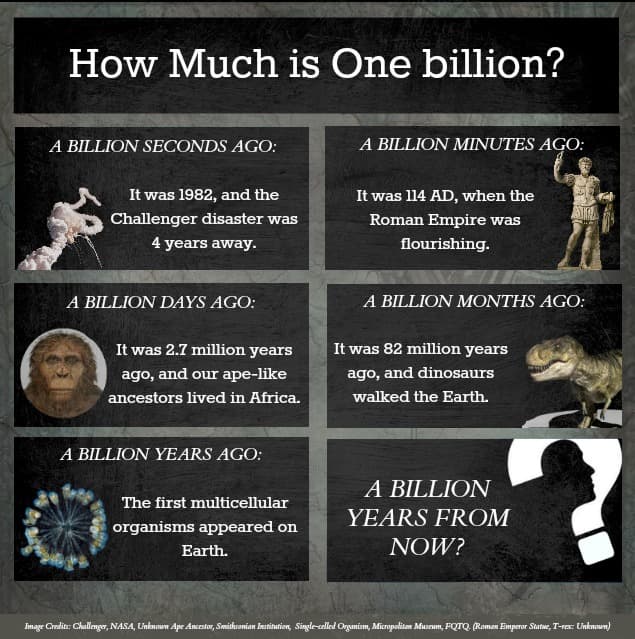 What exactly is it that you picture when you are told that there are seven billion humans alive on this planet, or that the distance between Neptune and the Sun is 4.5 billion km (2.8 billion miles)?  What does it mean to be orbiting one of more than a hundred billion stars in our galaxy?

We live in a time of billions; billions of a galaxies, stars, people, light-years…but how do we put something like this into perspective?  Can we really understand what a “billion” means?  The short answer: no.  Your brain is not capable of comprehending one billion in its raw essence. Now, this is all relative.  We can comprehend a meter, which is one billion nanometers, but even if I could express to you how small a nanometer is, you probably wouldn’t be able to comprehend all of the nanometers in a meter at once.  This can be analogous to viewing a picture with a large number of pixels, but you don’t see all of the pixels, you see the complete picture.  It’s just how our brain works.

So I can’t put one billion into your head in the sense of pure comprehension, but I can still try to make your brain hurt.  Understanding how big a billion is will help you in grasping various aspects of science, mathematics, as well as our place in the universe.

One billion, as many of you know, is a one followed by nine zeroes: 1,000,000,000.  Written in scientific notation this is 10^9, or ten multiplied by itself nine times.  For clarity, I want you all to know that I am referring to one billion as it is in the short system.  In the traditional long system, what is commonly understood to be one trillion is described as billion (bi-million, two millions multiplied by one another).  In that system, a billion is 10^12.  For those of you who don’t understand, here is a great resource to explain.

Imagine in your mind one object, a ball or pencil, something very simple.  Now picture exactly ten of that object.  Multiply this and try again to picture exactly one hundred of this object.  Now picture a thousand.  This is where it becomes difficult, because try as you might, you will most likely not be able to picture exactly one thousand of this object, though you will probably get a nice ballpark.  As you approach larger and larger numbers, your degree of accuracy with comprehension decreases drastically, until it is completely impossible.  This is what I mean when I say you cannot comprehend a billion, our brains just did not evolve for that function.  So, when you talk to someone about billions of something, it’s likely their brain is just hearing a vague,“big number”.  We think about big numbers in how they relate to other, smaller numbers.

This image (which will not fit properly into the article) is a representation of one million dots.  At first glance it seems to be only made up of grey squares, but if you zoom in on the image (assuming your browser will allow it) you will see each tiny grey square is composed of one hundred tiny black points.  If I were to publish a book pages large enough to show each individual dot in this image on one page, I would need to print a one thousand page book in order to depict a billion of the dots.  Such a book would be much larger than practical.

The artist Robert Barry did a piece similar to this concept.  He created a work consisting of 25 volumes of dots, each book containing forty-million dots, and each page containing forty-thousand.  The piece was on display at the Montclair Art Museum this past fall.

So one billion is a very large number to the human mind, because we cannot accurately think about it.  But remember, that there is an infinity of larger numbers out there.