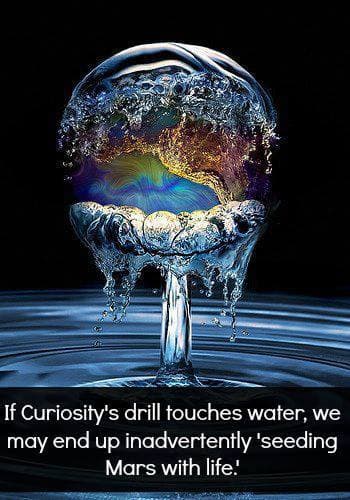 The universe will simultaneously implode and explode, a thing that only kittens can survive; consequently, kittens will rule the cosmos (or at least what’s left of it). Kidding.

Nothing fascinates the imagination quite like the search for extraterrestrial life, even if that life is on the smallish side. It is this fascination that governed the creation of NASA’s Curiosity rover.

The primary goal of this mission is to determine whether or not Earth is the only planet in our solar system that is capable (or ever was capable) of sustaining life. We’re not really expecting to find any woolly beasts rambling across the Martian surface, just hoping to find evidence of habitable conditions for microscopic organisms. In an attempt to find such evidence, the rover was sent to Mars to study geological formations and the Martian atmosphere.

Of course, water is an integral part of habitable conditions. And shortly after landing on the planetary surface, Curiosity found evidence of water—more than that, it found evidence of a flowing stream. But the rover has an operating lifespan of a full Martian year (687 Earth days), so what will Curiosity do for the rest of its mission?

It will continue searching for evidence of water and other conditions conducive to life. The Mars Hand Lens Imager is able to take close-up pictures of rocks and soil. Ultimately, it can reveal details smaller than the width of a human hair. The rover also has a number of instruments that are capable of identifying a wide range of organic (carbon-containing) compounds, and determining the compositions of various Martian rocks.

But what if Curiosity actually finds water on Mars, as opposed to just evidence of it? Since the rover's drill bits may be tainted with microbes from Earth, and these microbes could survive upon touching Martian water, we might have a problem. The drill bits were sterilized inside a box six months before launch; however, engineers grew concerned that a rough landing could damage the drill mechanism, so they decided to open the box and mount one bit in the drill. Opening the box required the consent of the NASA scientist responsible for guarding Mars against contamination, but Planetary Protection Officer Catharine Conley wasn't consulted.

Which means that the rover will not be allowed to come into contact with any water it discovers.

John D. Rummel, a professor of biology at East Carolina University and a former NASA Planetary Protection Officer, stated: "It will be a sad day for NASA if they do detect ice or water. That's because the Curiosity project will most likely be told, 'Gee, that's nice. Now turn around.'"

And the search for habitable conditions will continue elsewhere. Ultimately, the information that is gathered during this mission will be used to (among other things) help plan manned missions to Mars.