What Does it Mean When a Black Hole is Dormant? 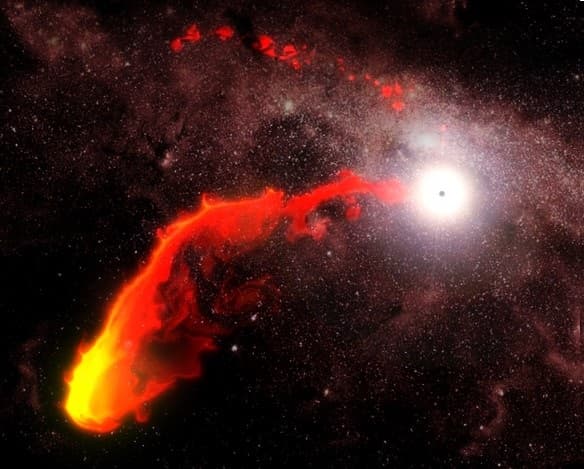 Question: How does a black hole "sleep" and what would cause it to "wake up?"

Generally, black holes spend a considerable amount of time feeding on objects that dwell too close to their event horizon -- the point at which the escape velocity becomes higher than the speed of light, thus the object (including photons) cannot escape and will be sucked in. However, as we know, objects can remain in relatively stable orbits around a black hole without being destroyed by a singularity. (In fact, some theorists have put forth a hypothesis that ultra advanced aliens may actually safely INSIDE of the event horizon of black holes) Therefore, if there is nothing in orbit to feed on, a black hole may become inactive temporarily. This is not unusual to see.

After an extended amount of time, a black hole may awake from its slumber and begin actively feeding on planets, stars or gas clouds. A myriad of events could lead to said black hole becoming active again, which include galactic collisions, or mergers, on a large scale, or simply an event (or a gravitational interaction) that destabilizes a star's orbit enough to send it spiraling inward.

As an example, Sagittarius A*, the black hole at our galaxy's center, is technically dormant right now and has been for over forty years, though it is expected that later on this year, the black hole will become active again, though we aren't sure to what extent. Currently, there is a rather large cloud spiraling toward it and will come within 36 light-hours of the event horizon -- the closest any object has been for many years now. When (and if, as it isn't a sure bet) this occurs, the cloud will heat up exponentially, releasing a plethora of x-ray radiation that will almost certainly be visible from Earth. As a nerd who can't get enough of this stuff, I am pretty excited.

Since we're already on the topic of dormant black holes becoming active again, now is the best time to briefly discuss something that was in the news recently. Just a few days ago, astronomers observed a so-called "dormant" black hole waking up and gobbling up a brown dwarf that was about 14 to 30 times more massive than Jupiter.

Click here for a cool simulation of the event: