What Can We Learn From the Well-Preserved "Franklin Expedition" Mummies? 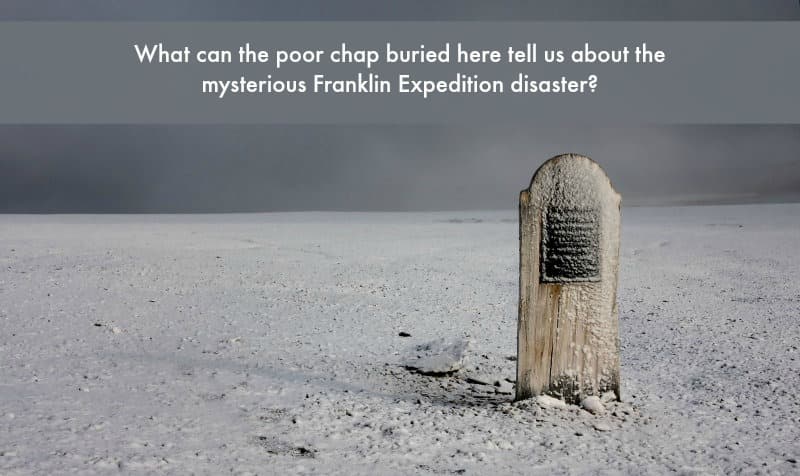 In this day and age, there are seemingly millions of ways someone can drop dead. A few centuries ago, however, things were much more simplistic. Most people died from the same few things: malnutrition, plagues, like smallpox or tuberculosis, which were made more problematic by the unsanitary living conditions of the time. In yet another way that the past drastically differs from the present, when someone died, they were quickly laid to rest in an effort to staunch the spread of any such plagues that could wipe out a huge chunk of the population. Today, we cut the dead open and inspect every last organ in their bodies. Autopsies, as they are called, help medical examiners determine how and when someone died, while also telling us in good detail how that person lived.  In that sense, our bodies truly are scrapbooks.

Unfortunately, the human body is only viable for a short period of time after someone passes away. The process can be halted temporarily thanks to the practice of embalming (and the refrigeration of a corpse helps too), but nature itself always takes over and we revert back to the Earth from which we came. There are other way of preserving a body though. The ancient Egyptians pretty much mastered the art of longevity but even their methods are inferior to those that happen organically. In certain places around the globe, someone can die and remain just as they were in life for centuries to come. (not alive obviously, but there are some VERY interesting mummies that draw a fine line between looking dead and alive.) Some of those mummies have been found and unearthed, giving modern scientists an opportunity to understand our ancestors in ways they never even dreamed possible.  To that effect:

In one of the more fascinating examples, more than 150 years ago, a large group of explorers boarded a ship destined for the Northwest Passage (you may associate this route with Lewis and Clark, the legendary explorers). Following in the footsteps of other ships that set sail years before them with disastrous results, the 150 some crew members, along with their two ships and about 7 years of supplies, seemingly disappeared off the face of Earth. In life, the men that boarded the ship were never heard from again, but about 5 years later, one of many expeditions were sent out to determine the fate of the men and their ships, HMS Terror and the Erebus, who came across something rather curious.

On Beechey Island - an island located off the  Canadian Arctic Archipelago - the captain of the search crew discovered what remained of a makeshift campground, which still contained evidence of a human settlement (some empty tin cans, a stone hut and the like were found). Still not convinced that he had discovered the fate of the doomed Franklin Expedition crew, he searched further, eventually unearthing the icy grave stones of three men, who were on one of the two ships traversing the oceans between Asia and the Americas. Their gravestones revealed that the three men, John Torrington, John Hartnell, and William Braine, had all died within months of each other (two died within days of the other, while one lasted about 3 months longer), less than 7 months into their journey.  They also found some unfinished notes that indicated that the ships had hit ice in late 1846 and surviving crew members attempted to walk across about 100 miles of ice pushing a small boat, until they came across a river that they could cross to safety. Obviously, something went very wrong.

Rather than exploring further, the captain and his men left Beechey Island and the secrets it hid behind and journeyed back to England, carrying several pieces of the puzzle with them. The mystery remained for more than 100 years, only ending when a new crew of anthropologists were dispatched to exhume the bodies of the men buried in the graves on Beechy Island. When their dirt tombs were unearthed for the first time in 150 years, the scientists were surprised to find that the bodies were in such a pristine condition.  Each of the men still had toenails and eyebrows intact. Moreover, the team members were able to give a voice to three long-dead men, who died under horrific circumstances.

After digging through 6 feet of frozen permafrost, Owen Beattie and his team studied John Torrington; a 20 year old steam boiler attendant who hailed from Manchester, England. They were immediately hit with a repugnant odor, but its origin is a bit surprising. You see, the smell they reported didn't come from Torrington's corpse, but from a blue wool blanket that was buried with him. Said fabric was also responsible f0r the blackish-blue discoloration of his nose and face.

The team then worked with several tools to remove some of the ice that encased his body; carefully removing and documenting the artifacts also found in his coffin. Once the body was freed, they carefully removed Torrington from the tomb - discovering that his body was still limp and flexible - they got a glimpse into the final chapter of his short life.

Not only was he severely malnourished  (only weighing about 88 pounds when he died), but they found evidence of tuberculosis and pneumonia. Both can be a death sentence even in modern times. So given the number of outside factors that could have contributed to his demise, it's plausible that one of the other did kill him.  Furthermore, it looked as if his death was slow and quite excruciating. The team found that not only were his nails clean, but his hands did not contain any signs of blisters or callouses. This indicates that he was unable to work for months prior to his death

The Second Expedition to Beechy Island:

The team had to leave the island before they could examine the bodies in the other two graves. So they collected samples from Torrington's corpse and took them with them back to their country.  They ventured back to the arctic the following year and a half to carry out the rest of the mission.

They were surprised to find that one of the bodies, belonging to seaman John Hartnell, had been disturbed following his death. Based on some suspect incisions and the fact that his organs had been removed, they team believed he was autopsied at some point. This was an obvious setback since internal organs are very important in determining a cause of death, but like with Torrington, they collected hair, nail and skin samples to study once they journeyed back home.

Next, they dug up the last corpse;  Private William Braine, who was the last of the three men to die. Of all of the bodies, Braine's was in the worst condition. The team believed the reason for this was that Braine's body was left out in the open for some time before he was buried. They came to such a conclusion based on the fact that it looked as if his body had been gnawed by rats. One of his arms was also missing, but once he was lifted from his coffin, they found his arm had been placed under his corpse. Similarly, unlike the other bodies, Braine's showed  small signs of decomposition. Again, this indicates that his body was left exposed to the elements.

His burial was likely hasty as well. Once they uncloaked his face , which was covered by a bright red handkerchief (you can see the remnants of it pulled above his forehead in the image on the right) , they saw that his nose was flattened and turned up at the tip -- a clear sign that his casket was too shallow. The thin wood pushed against his face for almost 150 years, leaving behind an indention.

Once they were finished collecting the samples from the bodies of William Braine and Josh Hartnell, the team gently put both men back into their caskets and reburied them for what would be the final time. But before they left Beechy Island, they took the time fix up the grave sites. As the leader put it so delicately,  "I work with the bones of dead people every day," "I'm sensitive to the fact that they were people. "

Finally,  they gathered some of the tin cans found nearby and headed home to analyze the data they collected and compare the results from Braine and Hartnell to that of their fallen friend; John Torrington.

The bodies of all three men showed high-levels of lead in their system. So much lead that each would need to consume approximately 3.3 mg of lead each day over the course of 8 months to account for all of the lead found in their corpses. .At first, the team believed that the high concentrations came from the tin cans of food the expedition left with (and were subsequently found near the gravesite), but that conclusion has been marred in controversy in recent years. Now, many scientists believe the lead was an artifact of the water filtration system used on the ships; an assertion that can't be proven without access to the ships themselves, which, to this day, have never been found.

Whatever the truth of the matter may be, our three men were likely the lucky ones.  The team members that carried out the exhumation and postmortem inspections came to the conclusion that the men died from tuberculosis. That seems favorable to the fate many of their comrades suffered, as lead poisoning is a particularly vicious way to die. Once exposed to so much of it, the men would feel extremely weak and nauseous. Soon after, they would be unable to make basic decisions (which would explain some of the absurdities that happened after their ships were compromised). Other skeletons found in the area showed that the men might have resorted to cannibalism when things got really bad.

It's very awe-inspiring that it's within science's reach to uncover so many ancient mysteries. Don't you agree?

How the Men Could Have Looked in Life:

R.I.P John Torrington, William Braine, John Harnell and all of the fallen members of the Franklin Expedition Crew. All images courtesy of Owen Beattie and the University of Alberta, Canada.

You can see a similar article I wrote for listverse.com for additional examples of interesting mummies here. Or, learn about the physics of death, or how death and decomposition differ in outerspace.