How & When to Watch Tonight's Blood Moon Eclipse 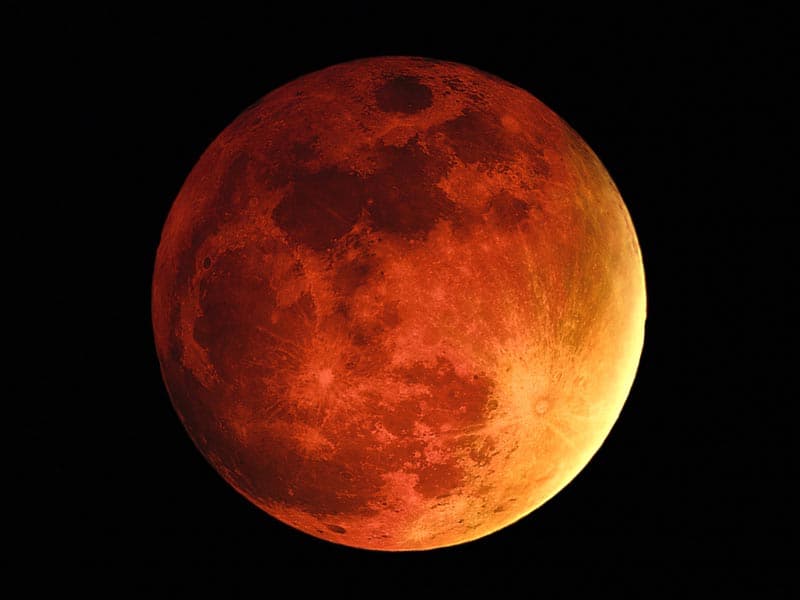 Tonight, those of us in North America will have front seats to one of the most amazing views that Earth has to offer—A total Lunar eclipse. During a total Lunar eclipse, the Moon appears coppery and reddish, this is often called a “blood Moon.” This happens because, during a full eclipse, the sunlight that hits the moon has to pass through the Earth’s atmosphere. As a result, it makes the Moon look like it is glowing red. It is a pretty spectacular thing to witness.

Where to Watch from Home:

If you live in North America, you will need to stay up a bit late in order to see the show.  The Moon will be hanging low over the western horizon, probably swollen by the famous Moon illusion into a seemingly-giant red orb, briefly visible before daybreak. West-coast observers are even better positioned. The Moon will be high in the sky as spectacular show gets under way at 4:15 a.m. ET  (the climax [totality] comes between 6:25 and 7:25 a.m. ET). Not in North America? Don't worry too much. You don’t have to be in North America to see the eclipse (though that will definitely make it easier), you will be able to see it from portions of Asia on the other side of the Pacific.

Going to miss this one? Don’t worry to much, according to NASA, this total eclipse will be followed by another on April 4th and September 28th of 2015. This is known as a “tetrad,” a series of 4 consecutive total eclipses occurring over the course of several months (the first was on April 14th, 2014).

During this process our planet blocks nearly all the light to the Moon. Here, using the term "nearly" is key. Earth's atmosphere will likely refract the Sun's rays just enough to throw a reddish, sunset-like glow onto the Moon. The precise shade depends on atmospheric conditions. However, often it is such a deep shade that skywatchers call it a "Blood Moon" — which is apt for Halloween season.

As an added bonus, some people may be able to see both the Sun and Moon. This may seem impossible. How could one see both celestial bodies at the same time, considering that the Sun and Moon are on opposite sides of our planet during a lunar eclipse? Geometrically, this is a bit problematic. However, the refraction effect means light can be bent enough to place the Sun on one side of the sky, and the darkened Moon on the other.

Michael Zeiler, who has charted scores of eclipses as the curator of Eclipse-Maps.com, notes how rare this is:

It's a phenomenon that's barely possible. Besides being in the right location, you have to have the right conditions. Those right conditions require that you be at a high point, with an excellent view toward the horizon to the east and the west, and have transparent sky conditions to see both the sun and the moon.

Where To Watch Online: