It may actually be the same animal. 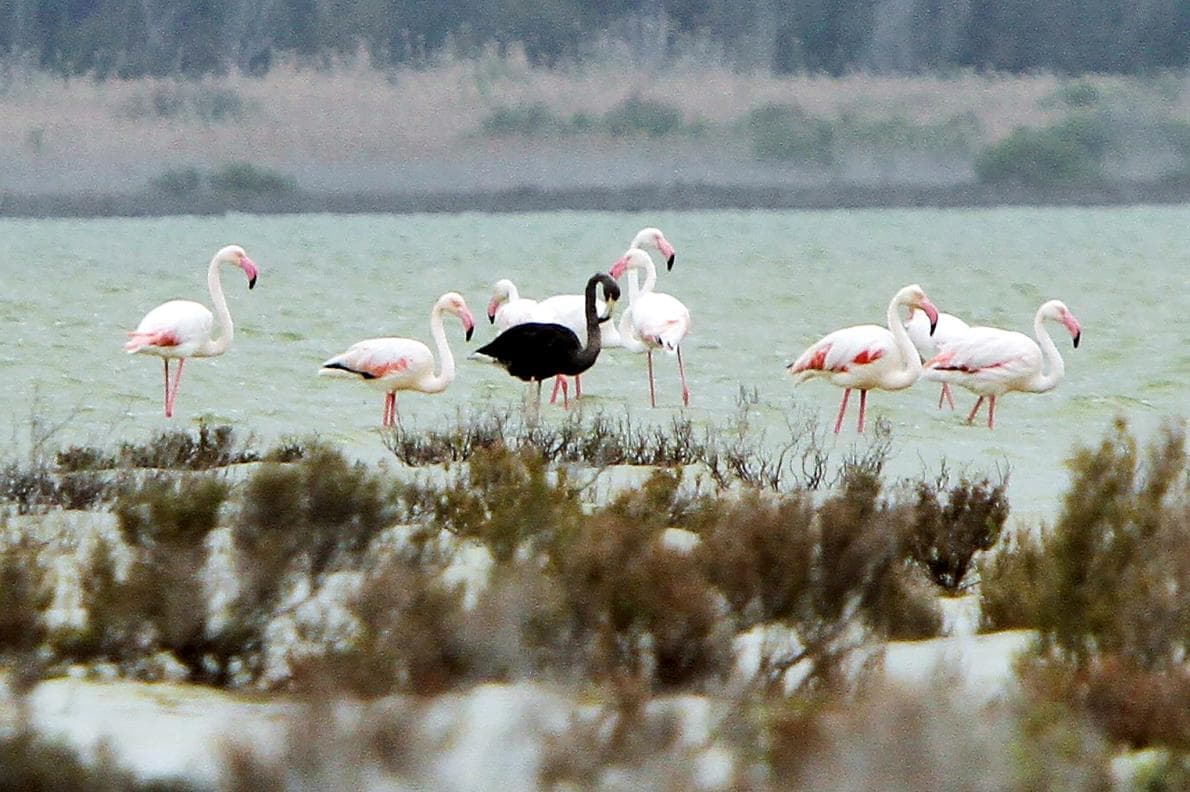 A number of sites recently reported that scientists in Cyprus may have just discovered the only black flamingo in the world. To some, this may seem a tad confusing, as all of the sites also note that another black flamingo was recently spotted in Israel.

But to be fair, the Israel sighting was in March of 2013 (just about two years ago), so we could assume that the Israel flamingo might have passed on by now; however, these creatures live, on average, 20 to 30 years, so there's no reason to assume that Israel's black flamingo is dead. In fact, one flamingo in Adelaide Zoo lived to be a staggering 83 years old.

Yet, flamingos do migrate vast distances, so it is possible that, in the Cyprus sighting, we are seeing the same flamingo that was spotted in Israel two years ago; however, this seems rather unlikely.

Black flamingos are amazingly rare, but basic probability suggests that they are not so rare that there is only one. As Tim Fitzer, of the Sacramento Audubon Society, put it, "the odds of a flamingo being born melanistic (black) are very low, but there are lots of flamingos out there." Globally, it is estimated that there are some 5 million flamingos. However, the greater flamingo (the species sighted here) is believed to only have a population of a couple million.

Yet, conservationist Michaeline Moloney, of the Flamingo Specialists Group, asserts that the two birds are the same. She claims that the videos filmed in Cyprus and Israel show the exact same bird, which are distinguishable by how they look and interact with others.

But even if this is the same bird in each sighting, it does not mean that it is the only black flamingo in existence. In any case, I digress too much...

Typically, flamingos are born white and grey, but they turn a lush shade of pink around two years of age. This change in color is caused by the food that they eat, which has a high carotenoid (organic pigment) content. According to the Cornell Lab of Ornithology at Cornell University, melanistic animals (creatures that overproduce melanin, a process which changes their colors to black) are thought to be less common than albino organisms (creatures that have an absence of melanin, so they appear to be all white).

However, despite this rarity, scientists in Cyprus recently spotted a melanistic flamingo. Ultimately, the researchers think that both of the birds spotted have a genetic condition that causes them to create too much melanin and, as a result, they turn black.

Regardless of how rare they are, they are spectacular...

Read This Next
Futurism
Plan to Create a Genetic Rolodex of Life on Earth Could Save Lives
Futurism
The World’s Rivers Are All Backed Up, Leaving Fish With No Place To Go
Futurism
A Moss Can Naturally Clean Harmful Arsenic From Water
Futurism
Rats That Live 30 Years, Rarely Get Cancer, and Feel No Pain Are Revolutionizing Medicine
Futurism
Blue Whales: Meet the Largest Creatures On Earth
More on Earth & Energy
From Bad to Worse
Yesterday on the byte
Global Warming Is Worse Than We Thought, AI Tells Scientists
RIP Fred
Yesterday on the byte
Instead of Predicting Length of Winter, Groundhog Simply Dies
Fly Guy
Wednesday on the byte
Bird Advocates Horrified by Pigeon Dyed Pink For Gender Reveal Party
READ MORE STORIES ABOUT / Earth & Energy
Keep up.
Subscribe to our daily newsletter to keep in touch with the subjects shaping our future.
+Social+Newsletter
TopicsAbout UsContact Us
Copyright ©, Camden Media Inc All Rights Reserved. See our User Agreement, Privacy Policy and Data Use Policy. The material on this site may not be reproduced, distributed, transmitted, cached or otherwise used, except with prior written permission of Futurism. Articles may contain affiliate links which enable us to share in the revenue of any purchases made.
Fonts by Typekit and Monotype.