WATCH: Optical Illusions - Which One Do You See? 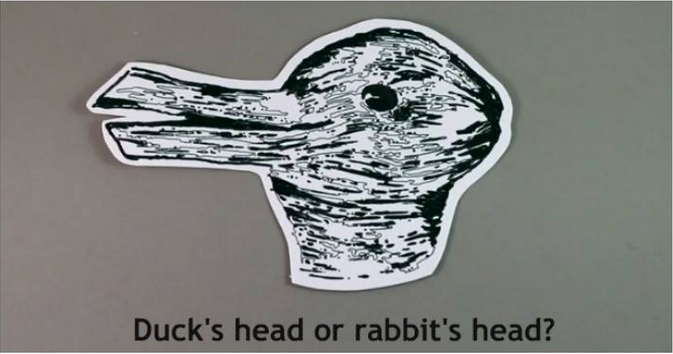 Optical illusions are more than just funny quirks. They actually help us understand a little something about the human brain and how it works. In this latest video from BrainCraft, you can see some neat illusions and learn how what you see is affected by your brain. Ultimately, the differences in our subjective experiences (and interpretations) are not entirely random, and they're also not based entirely on previous experiences. Rather, they are tied to different sizes of certain areas of our brain.

This image that you see above was drawn by an American psychologist, Joseph Jastrow, some two centuries ago. You can see it as either a duck or you can see it as a rabbit. Both interpretations are just as valid; however, interestingly, you can't see it as both simultaneously. In order to switch from seeing one to seeing the other, you need to use a bit of mental energy.

But why do some people initially see a duck and others first see a rabbit? A recent study has helped to shed some light on this.

It seems that the concentration of chemicals in the visual cortex may have an impact on what we see. Looking at the main picture that is shown on the video below (before you hit play), researchers asked volunteers to judge which of the orange circles is bigger. Then as the volunteers were working out the answer, the researchers used fMRI scans to map the part of the brain responsible for processing visual information, which is known as the "visual cortex."As it turns out, participants with a larger visual cortex were better at judging the true size of the orange circle (they are both the same size), and those with smaller visual cortexes were less accurate. Learn more about the connection between optical illusions and our brains in the video below.