Watch One Of The Largest Seas In The World Disappear 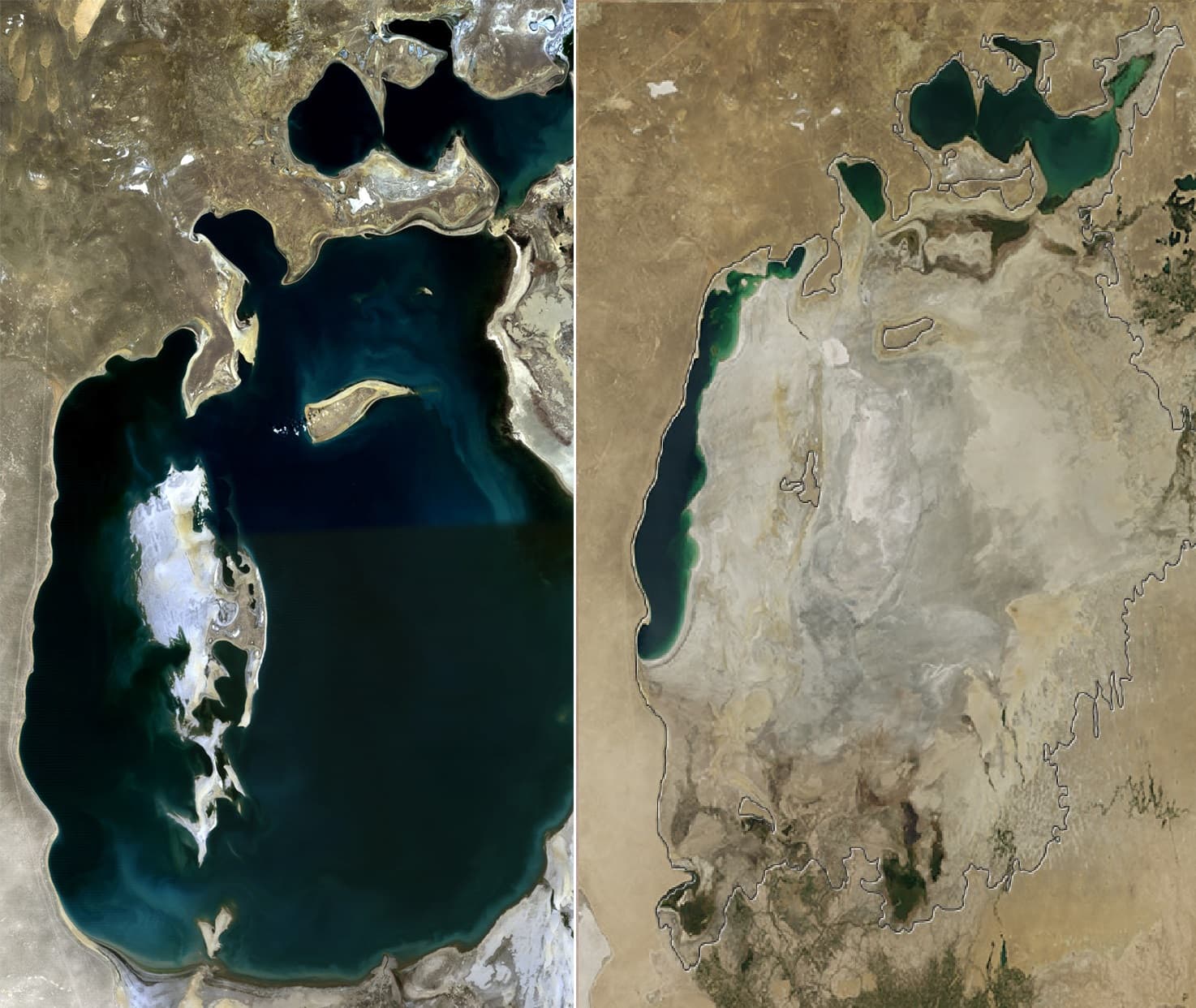 The Aral Sea was once the fourth largest sea in the world. No longer.

In the 1960s, the Soviet Union started an enormous project—diverting water from the Syr Darya and the Amu Darya rivers in order to transform local deserts into farms for cotton and other crops. The water diversion project played out on the arid plains of Kazakhstan, Uzbekistan, and Turkmenistan. The project was a success. It made the desert bloom. For a time, anyways. Ultimately, the 20,000 miles of canals that were constructed were inefficient and poorly constructed. But regardless of the effectiveness of the canals, one thing is clear:It was a death sentence for the Aral Sea.

The below image is a view of what it looked like in August of 2000 (left) and what it looks like today (right). The black outline shows how big the sea was in 1960 (the above image also gives you some idea of the former scale, as it was taken in 1989).

As the below image demonstrates, by 2000, the sea was just a fraction of its former size, and the Northern Aral Sea (which is also known as the Small Aral Sea) had separated from the Southern (Large) Aral Sea.  What's more, the Southern Aral Sea had split into eastern and western lobes that remained only tenuously connected at both ends. By the end of the decade, things had grown far worse...

Realizing how desperate things were getting, in a final effort to save some of the lake, Kazakhstan built a dam between the northern and southern parts of the Aral Sea. This project was completed in 2005. It was a killing blow for the Southern sea. But by this time, researchers had already acknowledged that the Southern sea was beyond saving. All of the water flowing into the desert basin from the Syr Darya now stays in the Northern Aral Sea. The below picture shows the difference between 2005 and 2009 (the 2009 image looks strikingly similar to the 2014 image, but it is not the same photo).

In the years following 2009, particularly rainy seasons led to a resurgence in the amount of water in the sea. Sadly, this was not enough to stop the shrinking trend. The loss of the Aral Sea had a dramatic impact on the environment. As NASA reports,

As the lake dried up, fisheries and the communities that depended on them collapsed. The increasingly salty water became polluted with fertilizer and pesticides. The blowing dust from the exposed lakebed, contaminated with agricultural chemicals, became a public health hazard. The salty dust blew off the lakebed and settled onto fields, degrading the soil. Croplands had to be flushed with larger and larger volumes of river water. The loss of the moderating influence of such a large body of water made winters colder and summers hotter and drier.

As the images show, dry conditions in 2014 caused the Southern Sea’s eastern lobe to completely dry up for the first time in modern times. "It is likely the first time it has completely dried in 600 years, since medieval desiccation associated with diversion of Amu Darya [river] to the Caspian Sea," Philip Micklin, an Aral Sea expert and a geographer emeritus from Western Michigan University, in Kalamazoo, told NASA about the sea's eastern basin. The images were made by NASA's Terra satellite in August and released on Tuesday (September, 30 2014).