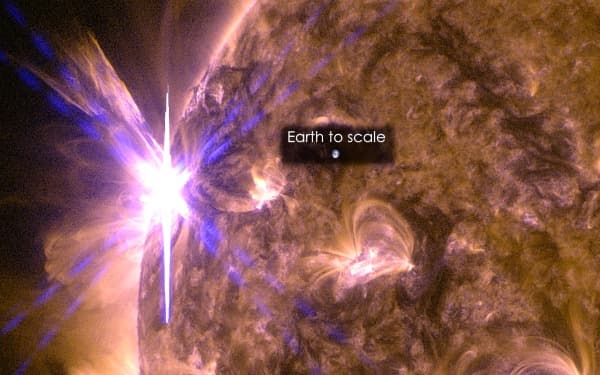 This past month (5 May 2015), NASA’s Solar Dynamics Observatory (SDO) captured a stunning image of a X-class solar flare. Solar flares are extreme eruptions from our sun, and they are one of the most powerful storms in our solar system (the other being coronal mass ejections). Known as solar storms, these events generally occur as a result of variations in the Sun’s magnetic field lines. When these field lines fluctuate, the matter they contain is released out into the solar system (and by “released,” I mean that it explodes from the Sun in a hellish firestorm).

Super-heated particles blast from the Sun at speeds exceeding 600 miles per second (1,000 kms), and they can contain over 200 billion pounds of material (100 billion kilograms). Which is bad news for anything that is in the path of this explosion.

Fortunately, Earth's atmosphere stops most of the radiation that washes across our planet; however, particularly powerful solar storms may disrupt satellites in low Earth orbit.

In the above image from NASA,  we see different wavelengths of extreme ultraviolet light. Each highlights a different temperature of material on the sun. Scientists take these various images because, by comparing them, they can come to a better understanding of how matter moves across the sun during solar storms. NASA notes what we are seeing: "From left to right, the wavelengths are: visible light, 171 Angstroms, 304 Angstroms, 193 Angstroms and 131 Angstroms."

The flare seen here is classified as a X2.7-class flare. X-class flares are the most powerful classification. The letter (the X) tells us how intense the flare is. Flares are rated according to a class (from least to most intense) B, C, M, or X.. And the number provides more information related to the specific strength. For example, an X2 classification is a flare that is twice as intense as an X1. An X3 is three times as intense, and so on.

In this image, we see a scale comparison between the solar flare and Earth. Of course, when the material is released from the sun, it does not come shooting straight out at our planet, and it does not maintain its shape after being ejected. Rather, it is dispersed across the solar system and the other planets share the heat. And since the Earth is some 93 million miles away from the sun (about 150 million km), these extremely energetic particles are rather spread out by the time that they reach us.

And based on what we see in the above image, let's be glad that we are so distant.

Here, we see sunspots that are associated with the May event. Sunspots, dark areas on our star's surface, form as a result of concentrations of the magnetic field. Sunspots typically have a magnetic field that is some 1,000 times stronger than the surrounding area. This phenomenon inhibits convection (convection is heat transference from moving material) and results in a lower surface temperature

It is believed that solar flares occur as a result of disturbances on the surface of the sun. Specifically, when the aforementioned magnetic fields typically associated with sunspots snap. Masses of hot gas follow the path of the magnetic field lines, and when these snap, the gas is suddenly released.

Watch the event below: