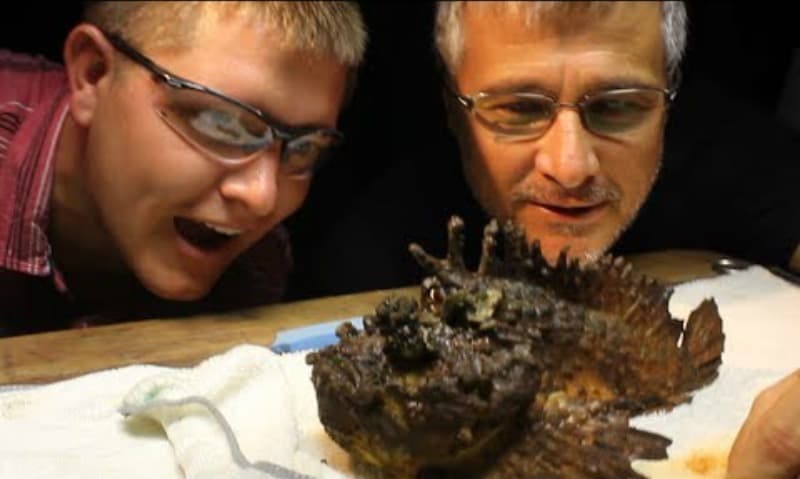 Stonefish are great at camouflage. This is a little bit unfortunate because, as it turns out, stonefish are venomous.  Terribly venomous. They are members of the family Scorpaenidae, or scorpion fish. The name should make it pretty clear that you shouldn't go around trying to pet these guys.

As a friendly reminder, the quick and dirty way to separate venomous creatures from poisonous ones is by thinking about bites: If you bite it and die, it is poisonous; if it bites you and you die, it is venomous.

But to break things down a bit more: To deliver their chemicals, venomous creatures bite you—they actively inject their deadly mixture into other organisms (via fangs, spines, stingers, or similar methods of delivery).

Ultimately, the prickly fins are what carry the fish's poisonous venom. If you are stung by one of these guys, swelling and redness can spread to an entire arm or leg within minutes. They cause vomiting, sweating, diarrhea, delirium, fainting, paralysis, and a slew of other not-so-fun symptoms. The effects, mainly the numbness and tingling, can last for weeks after the sting.

However, since there have been reports of individuals suffering stings and having somewhat mild reactions, we reached out to Dr. Jaime Seymour, an Australian toxinologist, professor at James Cook University, and the scientist featured in this video, to see just how nasty the stonefish is, and if all stonefish stings cause such a horrid reactions. He stated that for the most part, the response depends, not on the individual, but the specific fish:

"The issue here is there are many species of stone fish, some give a very minor sting while others give stings that bring tears to your eyes and cause pain for many many hours. The venom does not have an allergic component and this has nothing to do with the pain associated with it."

In any case, probably best to avoid all species when possible. But if you happen to be in the field of toxicology, or interested in it, take a look at how to work with these guys...