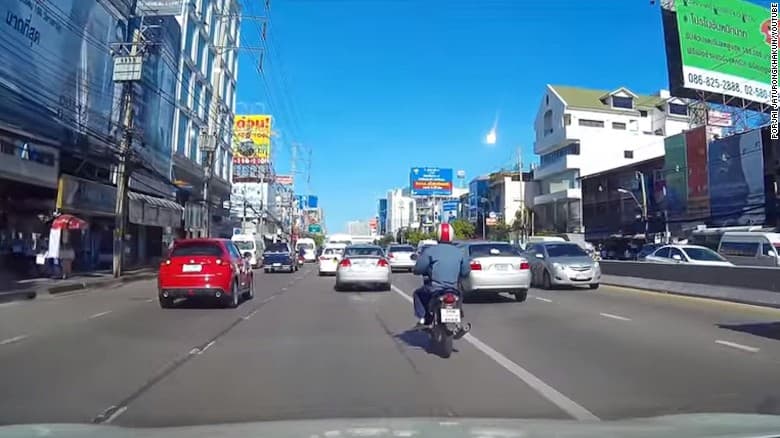 This morning (9/7/2015) a number of individuals in Thailand began posting photos and videos of a mysterious fireball that illuminated the sky over the capital city. However, keep in mind that "mysterious" is a relative term. At the present moment, we don't know exactly what it is, but all signs indicate that it was part of an asteroid (as opposed to space debris from one of our satellites).

This is because a satellite would likely have been traveling on a west-east axis, and the object shown here traveled in the opposite direction before bursting into flames.

The fireball was seen from various locations throughout the city. In the following video, the object can bee seen briefly flaring before dying out as it streaks toward Earth. In order to see the flare, skip ahead to :29

Huge fireball seen in sky over central Thailand from StudyInternational on Vimeo.

Saran Poshyachinda, Deputy Director of National Astronomical Research Institute of Thailand, told CNN that the object appeared to burn up about 100 kilometers (62 miles) above the ground, and that it was likely only a few kilograms in size: "It looks like an asteroid traveling to Earth and grazing through the air, and it turned into a fireball."

If you aren't aware, fireballs are still meteors, this is just a special sub-class for meteors. Meteors are bits of rock or dust that enter Earth's atmosphere and catch fire. We see them as "shooting stars." Meteorites, on the other hand, are meteors that survive the trip through our atmosphere and smash into the ground.

To bridge the gap, NASA has designated a “fireball” as being a meteor with a visual magnitude in excess of -3. For the most part, even meteors that are bright enough to be classed as fireballs aren’t large enough to make it through the Earth’s atmosphere intact. Instead, they burn up (are totally incinerated) as the descend through the atmosphere. That said, there are some smaller fireballs that sometimes reach the surface.

If you are wondering about the specific sizes, a fireball meteor will generally start when the meteor is at least 1 meter in size.