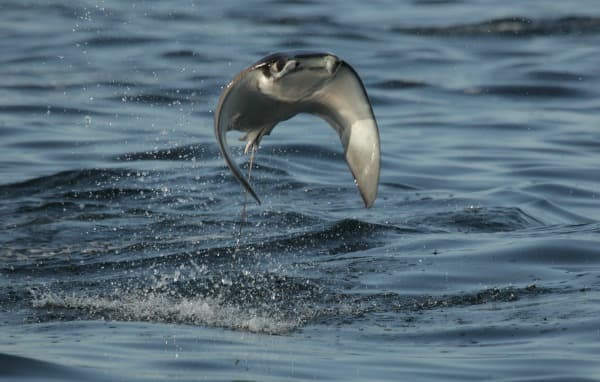 This is a mobula ray, and it is one of the most surprising fish found in the sea.  They are in the same family as the manta ray, but there is one notable difference: These guys can fly.

The mobula has the characteristic flat body of the ray, which allows them to glide through the water with ease. They also have long, wing-like pectoral fins, which allow them to swoop through both the land and the sea. Of course, given their size (and their biology), they can't stay airborne for too long. On average, the mobula rays reach 4 feet (1.2 meters). For comparison, various manta ray species reach between 18 and 23 feet (5.5 to 7 meters). Since they are somewhat larger than the mobula ray, its rather easy to see why the manta rays aren't know for their flying.

The mobula rays can fly higher than 6 feet in the air (about 2 meters). That height may not sound all that impressive when compared to the true flyers of the world, but it is a pretty impressive leap for a fish (and it's certainly higher than I can jump). During their flights, they generally only remain airborne for short distances, staying aloft for mere seconds.  Also, they have some issues with their landings, and often smack back into the sea with a loud belly flop.

Based on our observations, it seems that all mobulid rays fly, or jump, like this. Yet, the exact reason for this behavior is unknown. Some of the most prominent theories related to this behavior are that the rays use this action to assist with feeding, courting, getting rid of parasites, or even as a means of communication.

In the below video, photographers and videographers from national Geographic caught tens of thousands of mobula rays in a giant school just off the coast of Baja California. In the video, we see many of the rays take to the (admittedly low) skies.

Ultimately, the mystery of these creatures runs somewhat deeper than just their flying behavior. We know that they feed on small sea creatures, such as plankton and fish, and we know that they give birth to just one pup. Sadly, we also know that they are endangered, but due to their rather skittish nature, we don't know much about their lives in the sea.

“While the jumping behaviour may occur during feeding or courting events, we believe that the most likely purpose of the jumping behavior is communication, which could have a variety of applications in different behavioral scenarios. However it is very likely that mantas, mobulas and eagle rays jump for a variety of reasons," Joshua Stewart, from the Gulf of California Marine Program at Scripps Institution of Oceanography, told the BBC.

He goes on to note that this method of communication seems most likely to stem from issues related to feeding. "We believe that they're jumping to inform other mantas in the area that food is available, and using the jumping as a sort of signal to aggregate,”