Watch: Amazing Video of Lightning Bolt Getting Captured in a Glass Box 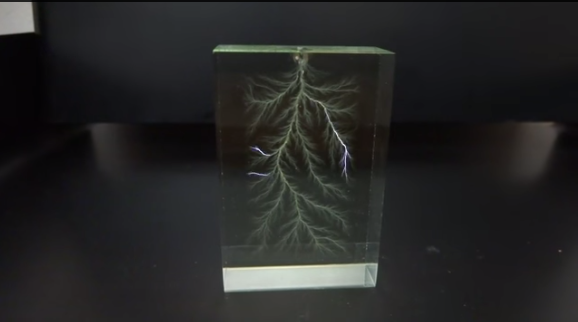 Some people specialize in business, others make their living with writing or math. Some play music, or act, or do a hundred other run-of-the-mill things. And some people create lightning. Well, certain kinds of lightning, anyways. Lightning is one of the most amazing forces on our planet. Unfortunately, these super energetic events are rather fleeting. The average lightning flash lasts just one second. That doesn’t give us too long to see it.

However, there are ways to preserve it. As the NUTEK Corporation notes:

Lichtenberg Figures can be created within solid insulating materials, such as acrylic or glass by injecting them with a beam of high speed electrons from a linear electron beam accelerator. Inside the accelerator, electrons are focused and accelerated to form a beam of high speed particles. Electrons emerging from the accelerator have energies up to 10MeV and are moving an appreciable fraction (95 - 99+ percent) of the speed of light (relativistic velocities). If the electron beam is aimed towards an acrylic specimen, the electrons easily penetrate the surface of the acrylic, rapidly slowing down as they collide with molecules inside the plastic.

And as you can see in this video, it looks like you've captured lightning.