WATCH: Amazing NASA Music Parody "All About that Space" 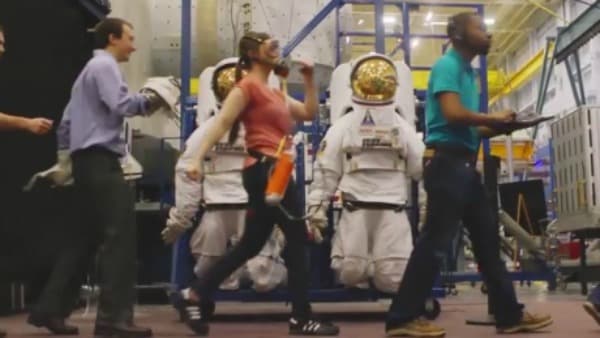 In case you missed it, NASA interns recently recorded this amazing version of Meghan Trainor’s hit song “All About That Bass.” Of course, they changed it up a little. The new title is "All About that Space," which, of course, is fitting for NASA. Trainor's song has currently been viewed more then 391 million times on YouTube. The NASA Version isn't quite that high yet, raking in just about 1.6 million. views.

Still, that's not to shabby for a bunch of scientists. I'd even venture to say that they should probably consider turning the whole "scientists by day and fantastic pop stars by night" thing into a full time venture. I'd certainly pay to see NASA LIVE IN CONCERT!

And no, it’s not hard science...or really science at all. But part of being a scientist is having a large helping of vitality with a side of ingenuity. And every now and again, we all need a little boost to help us get excited over space exploration.

All About That Space” is a volunteer outreach video project created by interns at NASA's Johnson Space Center. It was created as a parody (to raise interest and excitement for Orion's first flight) of Meghan Trainor’s “All About That Bass”. The lyrics and scenes in the video have been re-imagined in order to inform the public about the amazing work going on at NASA and the Johnson Space Center.

NASA’s Orion spacecraft is built to take humans farther than they’ve ever gone before. Orion will serve as the exploration vehicle that will carry the crew to space, provide emergency abort capability, sustain the crew during the space travel, and provide safe re-entry from deep space return velocities.

See the video below, and feel the wonder.