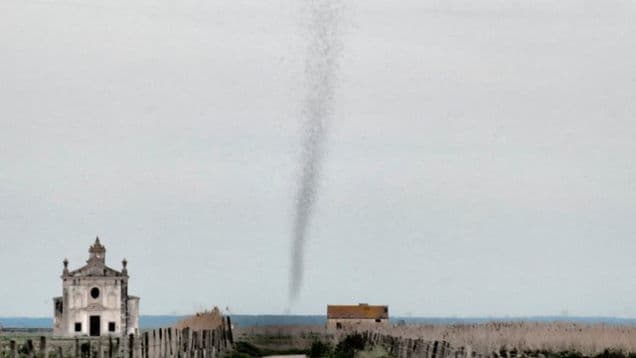 Anyone who has seen a tornado knows that they are rather frightening, but these tornadoes are more than scary; they are downright terrifying. In fact, they a bit reminiscent of what we might see in our nightmares.

What we see here is a living tornado. That's because this cyclone is composed of bugs (mosquitoes, to be exact). Photographer Ana Filipa Scarpa captured this event while  at Vila Franca de Xira in Portugal.

Scarpa describes the event by asserting that she was not initially aware of what was going on; "It was a very high funnel swinging to the left and to the right. I pointed my camera and began shooting before it hit me.

But the funnel did not move toward me—and I thought it was so strange—so I got into my car and started to drive towards it, and that's when I realized it was a mosquito twister."

Unfortunately (for us, anyways), such events are not uncommon, particularly in areas like Leziria Grande de Vila Franca de Xira, which have a lot of water for mosquitoes to breed and thrive. Of course, the events are also not exclusive to remote areas. The above is an image of a midge bugnado from Iowa.

This midge swarm was seen along Highway 30 in Council Bluffs, Iowa, where flooding in the area caused a population boom of the tiny insects.

You can see a video of mosquito tornados in the video below.