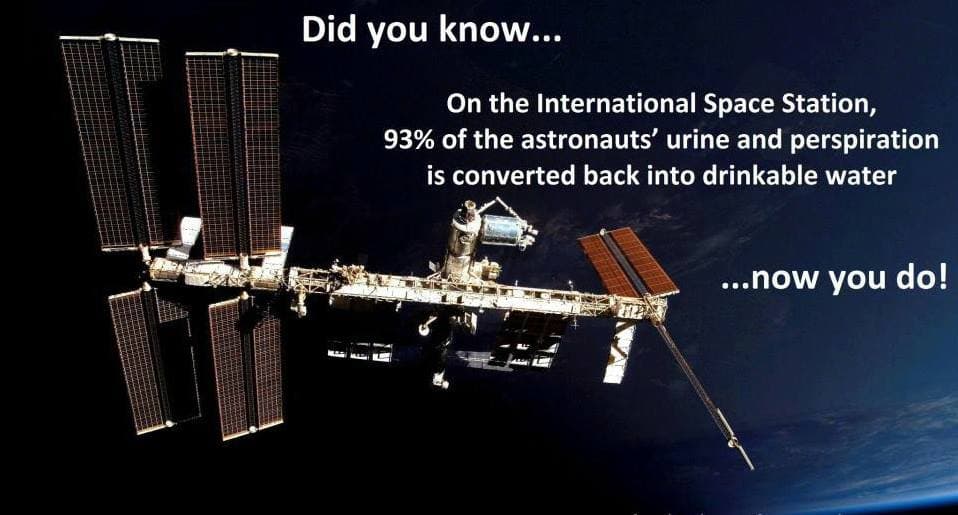 You’ve heard of The Circle of Life, but how much do you know about The Circle of Waste? On the International Space Station, nearly all of the wastewater produced by the crew (sweat, urine, bathwater, etc.) is filtered through a recycling system and converted back into clean water. Naturally, this includes the wastewater that is produced by the rats. In fact, on the Space Station, a complement of 72 rats equals about one human in terms of water reclamation.   That’s right; astronauts drink rat pee…maybe I should back up a bit. On the Earth, every ecosystem has a built-in recycling plant; if these systems are not affected by humans or other cataclysmic events, they take waste and recycle it into usable material—very little is wasted in the Earth’s natural life-support system.     Since the International Space Station (ISS) does not have a natural waste management system we’ve had to engineer our own way of dealing with urine and other forms of wastewater. One of the most basic ways that astronauts’ cope with wastewater is conservation. For example, instead of consuming the usual 13 gallons (50 liters) of water in the shower, astronauts on the ISS use less than 1 gallon (4 liters) of water to bathe. But no matter how much water you conserve—unless you recycle—sooner or later you’ll run out.

On Earth, recycling water is a relatively simple process: you boil the waste, and then cool the steam. However, without gravity, the contaminants in water never separate from the steam, no matter how much heat is used. To compensate for the lack of gravity, much of the recycling process takes place in a keg-sized distiller that spins to create an artificial gravity field. The contaminants in the urine press against the sides of the drum while the steam gathers in the middle and is pumped through a charcoal-like filter. Finally, chemical compounds are used to bond with the remaining contaminants so filters can pick them out of the water. The leftover waste is removed via a high-temperature assembly; the water is tested, and impure water is reprocessed, while clean water is sent to storage tanks.   Unfortunately, it seems that nothing is easy in space, not even using the bathroom. However, thanks to a number of determined individuals, the Water Recovery System aboard the ISS reclaims almost 93% of the wastewater that is produced by the crew. This system reduces the resources that need to be shuttled from Earth by more than15,000 pounds (6800 kg) per year. Ultimately, this recycling system allows the ISS to support 6 crew members, instead of the previous 3.

But 93% simply isn't good enough. We need to make up for the lost water by shuttling additional reserves to the ISS, a costly and time consuming procedure, one that will not be possibly on long term extra solar missions. If we are going to make it to the stars, we’re going to need to get a lot better at recycling. Personally, I can’t wait until we figured out how to make a ship that recycles wastewater at 100%... because nothing is better than celebrating a scientific achievement with a gulp of something you excreted just a few days before.