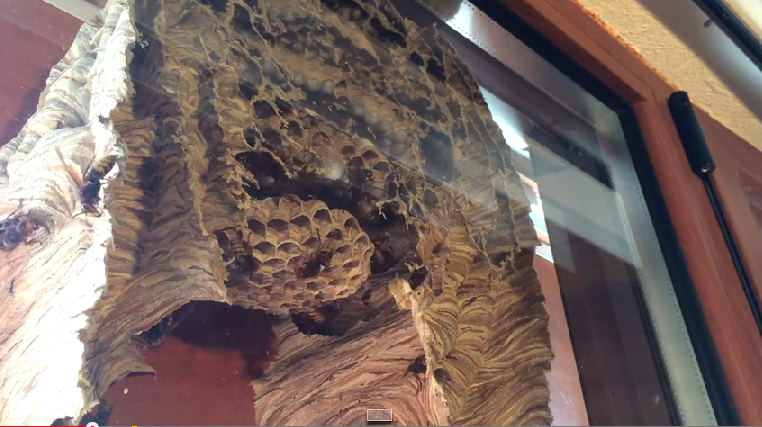 If you've ever wanted to see the inside of a wasp colony, now you have your chance. These videos were taken by YouTuber Vang Tsal. He caught the footage after an enormous swarm of wasps decided to build its hive up against a window located in the attic of his house.  The view is a tad terrifying, but Tsal note that the window is sealed and double-paned; "no worries for me or the neighbors," Tsal writes.

First Look Inside The Colony:

With more than 30,000 identified species, wasps are well-known around the globe. The nests that these insects make can be simply staggering in size, with most colonies boasting more than 5,000 individuals. The largest colony on record, according to the Guinness Book of World Records, was located in Waimaukau, New Zealand. The nest was discovered in April of 1963.

The colony numbered in the hundreds of thousands and measured 3.7 meters (12 feet) in length. It was 1.75 m (5.25 ft) in diameter and approximately 5.5 m (18 ft) in circumference. Sources have claimed that a larger wasp nest was discovered in the Canary Islands. This nest was supposed to measure some 6.7 meters (22 feet); however, credible sources could not be found at time of publication (September 15th, 2014).

Most people associate wasps with the pain that is inflicted by their pointed stingers, and people are quick to run for the insecticide whenever a colony crops up. It's a tad unfortunate, as  most of the 30,000 wasp species do not sting. Indeed, they are actually quite beneficial to humans and cause far more good than harm (and they are also a very necessary part of the ecosystem in general). Wasps prey on nearly every other insect species and are frequently used to control local pest populations (populations that harm agriculture). They are also great pollinators—and they are rather pretty to look at (wasps come in many colors, such as yellow, orange, bright red, and even blue).

Most of these insects have solitary habits. There are some 1,000 "social wasp" species (wasps that build large colonies like the one seen here); these species include hornets and yellow jackets, among many others. However, the rest (the majority) are all solitary species that use their stingers to hunt their prey.

Social wasps, on the other hand, only use their stingers only for defense.  But if social wasps only sting in defense, what's with all of the swarming and attacking? It all has to do with pheromones. A social wasp that is in distress will give off a pheromone that acts as a signal to any nearby colony members. When the other wasps receive this signal, they are forced into a frenzy.  Unlike bees, wasps can sting repeatedly; however, only females have stingers, which are actually modified egg-laying organs. In Prehistoric times, parasitic wasps would use their pointy appendages (their stingers) to lay eggs inside of living insects. The wasp would sting an insect, like a caterpillar, and inject the caterpillar with its offspring. As the offspring grew, the hatching larvae would consume the host insect—eating it from the inside out.