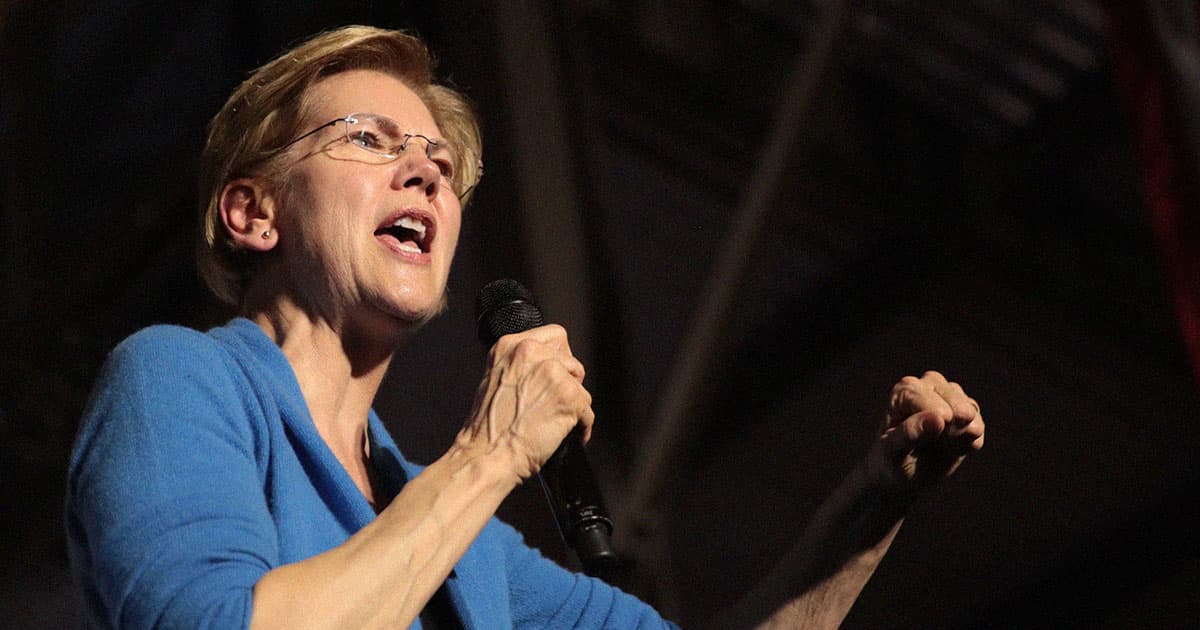 In an attempt to kill two birds with one stone, Massachusetts U.S. Senator Elizabeth Warren is trying to sanction Russia and regulate cryptocurrency at the same time. In doing so she's pissed off the cryptosphere at-large — but also, surprisingly, non-crypto evangelists, too.

On its face, Sen. Warren's new Russia/cryptocurrency regulation bill represents an attempt to squeeze blockchain businesses that do business with both Russia and the US, essentially forcing them to choose between the two countries, and exerting economic pressure on Russia as it continues its invasion of Ukraine.

But as many, many critics have noted, there's some major issues with the proposed legislation.

Analysts at the DC-based Coin Center think tank wrote in a blog post that the bill's key conceit — suggesting Russian oligarchs could use crypto wallets to launder tons of money — is implausible, given the public nature of blockchains, which record every transaction on open digital ledgers. Additionally, its broad language would criminalize a host of activities that are not, to the minds of the post's writers, criminal.

"The bill would place sweeping restrictions on persons who build, operate, and use cryptocurrency networks even if they have no knowledge or intent to help anyone evade sanctions," the blog post's authors, Jerry Brito and Peter Van Valkenburgh wrote, adding that the bill itself is "unnecessary, overbroad, and unconstitutional."

On the other side of Capitol Hill, some Democrats have also taken issue with Warren's attempts to regulate the burgeoning industry as well.

“The future of finance and the internet should not be left to a gerontocracy of regulators who appear to be on a personal crusade against crypto,” Rep. Ritchie Torres, a freshman congressman representing New York City, told Politico in an interview about the bill. “Congress, which has a new generation of legislators, should have the final word.”

"You should never define any technology by its worst uses," he added. "There’s more to crypto than ransomware, just like there’s more to money than money laundering.”

Even some of Warren's own constituents, like Evan Greer of the Fight for the Future digital advocacy group, believe that the language of the bill makes its main message — that crypto needs regulation — an afterthought.

"This is really disappointing," Greer wrote. "She is right that the crypto industry deserves more scrutiny, but this bill is terribly written, blatantly opportunistic, & attacks a problem that doesn't exist."

Backlash to the bill has resulted in a campaign against it from crypto enthusiasts as well, resulting in calls for concerted political action from a crowd that generally doesn't do that type of thing. Some have even gone so far as to suggest that Americans who own crypto should consider leaving the country, which is...comically on-brand for reverent crypto obsessives.

It's rare that people from this many walks of life agree on anything, much less agree on the same points. It remains unclear whether Warren's bill will be passed, but if it does, crypto may look a lot different.

More on the Russian crypto issue: Major Crypto Exchanges Say They Won't Shut Down Russian Transactions Unless They're Forced

Read This Next
SBF'ed Up
Sam Bankman-Fried Was a Horrible Boss, Former Exec Says
Beanbag Chair Musings
Sam Bankman-Fried, Bored on House Arrest, Starts a Substack
Sad!
Donald Trump's NFT Collection Is So Fantastically Ugly That Even His Biggest Fans Are Aghast
Sometimes You Winkleviin, Sometimes You Winklevose
Former Employees Say Problems Were Obvious at the Winklevoss' Exchange Before It Paused Withdrawals
A Lesson in Digging Your Own Grave
An Interviewer Asked Sam Bankman-Fried If He'd Been Honest and His Answer Was Bizarre
More on Blocknik
Girlbosses
Feb 1 on the byte
"Cryptoqueen" Accused of Stealing Billions Suddenly Surfaces
Their Minds...
Jan 28 on the byte
Business Geniuses at Amazon Hard at Work on Hot New Idea: NFTs
Floored Apes
Jan 27 on the byte
Yuga Labs Says Its Bored Apes Are Absolutely Copyrighted, Thank You Very Much
READ MORE STORIES ABOUT / Blocknik
Keep up.
Subscribe to our daily newsletter to keep in touch with the subjects shaping our future.
+Social+Newsletter
TopicsAbout UsContact Us
Copyright ©, Camden Media Inc All Rights Reserved. See our User Agreement, Privacy Policy and Data Use Policy. The material on this site may not be reproduced, distributed, transmitted, cached or otherwise used, except with prior written permission of Futurism. Articles may contain affiliate links which enable us to share in the revenue of any purchases made.
Fonts by Typekit and Monotype.