Want to Follow New Horizons to Pluto? Just use Your Phone 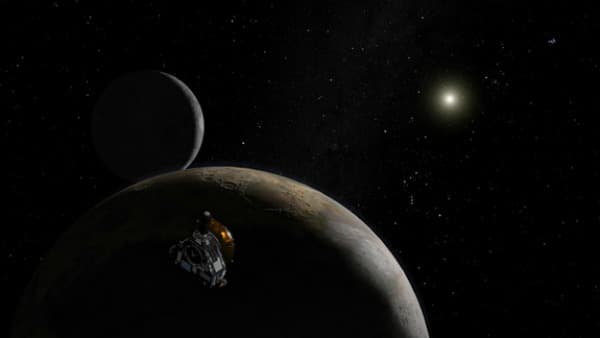 In case you didn't know, there is a small spacecraft currently making its way across the outer edges of our solar system. NASA's New Horizons is traveling past the realm of the gas giants, through the vast distances that separate our planets, slowly making its way to Pluto. Well, "slowly" is a bit relative.  When it finally reaches its primary destination, New Horizons will zoom past Pluto and its moons (Charon, Nix, Hydra, Kerberos, and Styx) travelling at an impressive 26,7000 miles an hour (43,000 km/h).

And one organization, Simulation Curriculum, has developed a free app that allows you to travel with New Horizons to the last unexplored planet (well, dwarf planet).

The app is called Pluto Safari, and it includes up-to-date news and information on the most recent data from the mission. It also includes an interactive map that allows you to zoom in or out on different parts of our solar system in order to see where the mission has been and track New Horizons as it continues its journey.

Pedro Braganca, from Simulation corporation, told From Quarks to Quasars that NASA's Jet Propulsion Laboratory (JPL) helped to ensure that the team had all of the necessary information that that it was all up-to-date. "During the development of the app we reached out to JPL to ensure the accuracy of the New Horizons' trajectory, and the position of Pluto, to ensure our simulations are as precise as possible," Braganca states. He goes on to note that key New Horizons personal also had a hand in the development of the app. The surface texture maps for Pluto and Charon, for instance, were created by Marc Buie of the Southwest research Institute (the folks behind New Horizons).

One of the most notable features is the news section, which allows users to get updates as soon as they are announced. Braganca notes, "We’ve been releasing updates as soon as a new finding is reported by the New Horizons team. We feel it is important to get the news out as quickly as possible. When a new article is posted, the user is notified via a Push Notification (alert) on their mobile device."

Braganca goes on to state that the goal is to inspire the next generation of scientists (so maybe a good app to get for younger people). Braganca asserts that this mission have provided an amazing opportunity to engage young people in science, “The New Horizons Pluto flyby is a rare chance for science to touch the general public. With a free app, we’re capturing a new generation at this teachable moment. The Voyager missions of the 1980s inspired engineers who went on to develop today's mobile technologies. Who knows what we might inspire today's young learner to accomplish 30 years from now?”

If you are looking for more than just news, Braganca notes that the app also has a“Pluto Gallery” section to showcase the latest images from New Horizons. Give it a go at the links below.