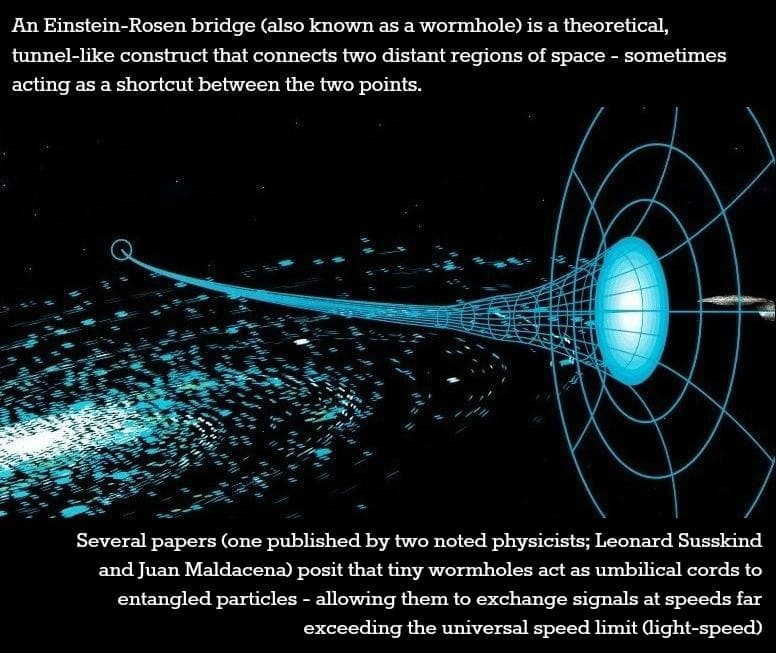 Quantum entanglement (also known as "spooky action at a distance") is one of the most bizarre things we see happening with particle interactions on a microscale. Instead of acting as one solitary particle, certain pairs act as one - always knowing what the other is doing (and changing based on the characteristics of its partner) - despite being located vast distances apart. Obviously, this is problematic. Relativity says that nothing can travel faster than the speed of light. Yet, that's exactly what entangled particles are doing - passing along information at speeds far exceeding light-speed travel - the universal speed limit. We shouldn't rush to make adjustments to general relativity though, as one hypothesis has been put forth that combines quantum entanglement with a darling (yet highly theoretical) concept - Einstein-Rosen bridges (commonly known as wormholes).

According to a paper, published by Juan Maldacena and Leonard Susskind: entangled particles may be connected to one another by infinitesimally small wormholes - tunnel-like portals that connect two distant regions of space. This is how they are able to exchange signals almost instantaneously - even when they are located on opposite ends of the universe. The whole thing centers on a concept called an eternal black hole - another highly theoretical concept that postulates an entirely different universe can be found on the "other side" of a black hole (to get to it, one must delve into the black hole's event horizon - the point of no return - before traveling into the singularity. Assuming you survive the spaghettification process - you would hypothetically pop back out into a different universe than the one you originated from). In layman terms, this indicates black holes are actually bridges that connect separate universes. (Or to put it another way, one single black hole exists in two universes)

Assuming you are still following me: in this scenario - with entangled black holes - any change to one of them would automatically effect the other as well. Hence the correlation between the two phenomena. As stated: these ideas, which are not new, are highly theoretical (perhaps even a little bit speculative). They will remain as such until we find definitive evidence of the existence of the so-called wormholes, but they are a mathematical prediction of general relativity. Therefore, one should expect this evidence to manifest eventually. In any case - the entanglement/wormhole hypothesis offers an explanation for noted instances of entangled particles becoming spontaneously disentangled - the wormholes connecting them collapse.

It also provides insight into several other perplexing concepts, dealing with a disconnect between general relativity and quantum mechanics. One deals with black holes and virtual particles.

Typically, they cancel one another out (and annihilate one another), but on some occasions, a black hole will consume one member of a pair of virtual particles - causing the other to physically manifest - before it drifts off into the abyss of space. We call this hawking radiation. In order for information about the objects the black hole consumed to remain intact - we believe that these particles must all be entangled with one another - meaning that the state of each individual particles depend of the state of similarly entangled particles of hawking radiation.

This presents us with a sticky paradox, called the black hole firewall paradox. It clearly indicates that each particle is entangled with not one, but multiple other particles at the same time - something the laws of physics frown upon. So, to avoid this - physicists developed a concept that says that after a particle crosses the event horizon - into the singularity - the quantum bond breaks. Subsequently producing a huge burst of energy that acts like a wall of fire.

This is where the wormhole/entanglement idea comes in to play. According to Susskind and Maldacena (who built on a paper published a few years prior to theirs) the wormholes connecting the particles from the interior and exterior of the event horizon act as a buffer to smooth out the entanglement issues - avoiding the need for a firewall. Going a bit further with that, we can say that even when a virtual particle "pops" into existence - before going on its merry way - it is still intimately connected not only to the interior of the black hole it came from, but it also has a palatable connection to its fellow brethren. They quite literally become interconnected by a slew of tiny, spaghetti-like strings. They may even remain as such after leaking hawking radiation causes the black hole to dry up, before evaporating - after the bulk of its mass is lost to space.

Of course - these quantum constructs are much to small for humans to traverse. That, paired with questions about their overall stability - mean that there is no need to get excited about the possibility of teleportation. Or anything else, for that matter. However, this could have a profound effect on how we view the overall structure of spacetime. One physicist - working separate from Susskind and Maldacena - even suggested that spacetime is a manifestation of quantum entanglement. All interesting ideas, indeed.