Glimpse: How Visual Effects Artists Bring the Future to the Big Screen

The movie magic behind your favorite sci-fi flicks. 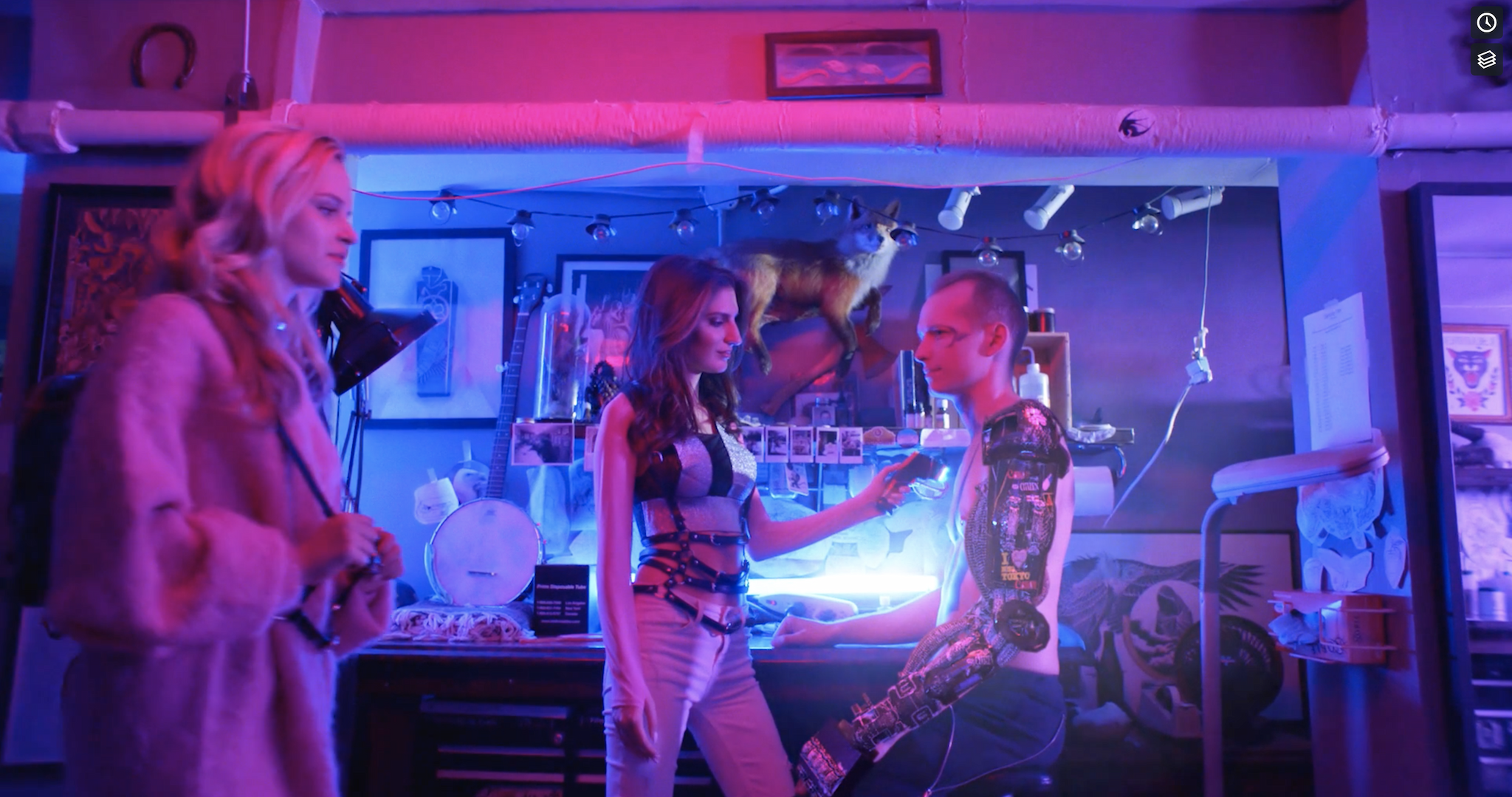 Editor's Note: Spoilers ahead for the Glimpse series. If you haven't seen all the episodes yet, check them out here.

When it comes to sci-fi movies, most of the far-future technology that lives inside our screens doesn't exist just yet. What brings all these possible futures to life on the big screen though—utopian and dystopian alike—is a creative artistic vision and a team of software-savvy someones with an abundance of technical skills and time.

These people are the visual effects (VFX) artists who live mostly in the world of post-production. They can place actors anywhere imaginable, give them entirely new bodily features, and even surround them with computer-generated digital elements. Essentially, these people make the future a visual reality.

In most cases, it all starts with a green screen. In The Stork from Glimpse, a series produced by Dust and Futurism Studios, the final scene initially appeared as a couple, Leven Rambin and Tilky Jones, in front of a green window in an office. The first step to making the couple appear to be looking into an artificial womb chamber, the big reveal in the short, required VFX artists to eliminate the green background through keying. By keying out the green, the artists create a transparent space lacking any original camera data where a computer-generated scene can be placed.

In order to view the couple looking into this space, they had to be rotoscoped to separate them from the background. Rotoscoping is kind of like cutting an object perfectly out of a photo so it can be placed in front of a different background. But in this case, it’s done using computer software and substantial mouse clicking to get the edges just right. Finally, artists created the womb chamber and placed it in front of the couple. In the end, each element has to be composited in such a way that all elements exhibit the same lighting, color, and textures for the video to play back seamlessly.

Another important technique associated with VFX is motion tracking. A point is usually marked during filming that will have to be automatically or manually tracked within editing software for the removal of the element or attachment of effects. For example, the biomodification, or cyborgism, seen throughout Glimpse’s Circuits involves tracking the actors’ body parts in post for tattoo attachment points.

These tracked points act as somewhat of a push pin for the VFX artists to link a computer enhanced glowing or flashing tattoo to the actors so they can securely control their “phones, drones, and smart homes.” This technique is known as two-dimensional tracking, but three-dimensional tracking also exists.

Three dimensional tracking captures the camera’s original motion in order to allow artists to composite elements in the frame that move with the camera as if they were actually filmed on set. In Glimpse’s Sebastian Moller, any time there is camera movement and a mammoth placed in the background of a scene, the VFX artist used 3D tracking. Without it, as the camera pans away from a mammoth the mammoth would never leave the screen.

Every Sci-fi feature or series most likely uses all of these techniques and more to bring the future to the forefront of the present. The Glimpse series most certainly did. Watch the video below to see a few scenes from the series before and after VFX.

Read This Next
Brands We Love
'Exhalation: Stories' by Ted Chiang Is Essential Reading for Science Fiction Fans
Brands We Love
Our Critically Acclaimed Futurism Cartoons Instagram Page Is Getting Its Own Book
Brands We Love
These Recent Sci-fi Books Should Be at the Top of Your Reading List
Dystopia Today
Glimpse: Utopian Fiction Could Help Us Unlock the Bright Future We Never Imagined
AR's Dark Side
Glimpse: Truly Useful Augmented Reality is Coming. We're Not Ready.
More on Sci-Fi Visions
What is Happening
Feb 1 on the byte
Elon Musk Sets His Twitter Account to Private
From the Dept. of...
Jan 30 on futurism
The Best Humidifiers of 2023
Human v. Giraffe
Jan 24 on the byte
Chaotic Italian Fashion Line Baffles Facial Recognition Software
READ MORE STORIES ABOUT / Sci-Fi Visions
Keep up.
Subscribe to our daily newsletter to keep in touch with the subjects shaping our future.
+Social+Newsletter
TopicsAbout UsContact Us
Copyright ©, Camden Media Inc All Rights Reserved. See our User Agreement, Privacy Policy and Data Use Policy. The material on this site may not be reproduced, distributed, transmitted, cached or otherwise used, except with prior written permission of Futurism. Articles may contain affiliate links which enable us to share in the revenue of any purchases made.
Fonts by Typekit and Monotype.